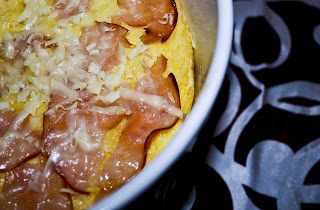 From Tessa Kiros's Apples for Jam, this simple, homey dish is a breeze to put together and just decadent enough to be completely satisfying. Kiros calls this a variation on the ham and cheese sandwich, and indeed it does have the same simple appeal.  I have to admit I dialed down the dairy a bit, using only 1/2 cup of cream and 1 1/2 cups of milk.  I also elected to only use a thin layer of parmesan cheese and I melted 2 tablespoons of butter instead of 5 1/2 so the bread could be lightly dipped in the butter, rather than slathered.  I also used Challah, which, I have to say, is almost always the best choice for any kind of custard, bread pudding or french toast preparation.  Nothing beats it!
Baked Ham and Cheese Savory Custard
3 eggs
1 cup milk
1 cup heavy whipping cream
Freshly grated nutmeg to tatse
Salt
About 5 1/2 tablespoons butter, softened (or less if you melt the butter first)
1 loaf white bread, crusts removed and cut into 1/2 thick slices
8 ounces thinly sliced ham
1 2/3 cups grated fontina, pecorino or something similar
2/3 cups crated parmesan cheese
Preheat the oven to 350, and lightly grease an ovenproof dish.  Whisk the eggs in a bowl and then add the cream and milk along with the nutmeg and a bit of salt.  Dip half of the bread slices in the melted butter and arrange them on the bottom of the dish, overlapping slightly, so that the dish is completely covered.  Pour on half of the egg/milk mixture and allow to sit for 5 minutes of so to give the bread a chance to soak up the milky goodness.  Next, add a layer of half of the ham and top with a layer of half the cheese.  Repeat the process with one more layer of bread, milk, ham and cheese.  Bake for 25-30 minutes until the top is golden brown and crusty.  When finished, allow the custard to cool a bit before serving.

*   *   *
I'm sorry about the quality of the picture.  I can already tell that photographing at night this winter is going to be a challenge!
Email Post
Labels: Apples for Jam Tessa Kiros

Katrina said…
The best dish that i can imagine ever!..Can't wait to try this over the weekend. My kids will surely love this
April 4, 2011 at 3:24 AM