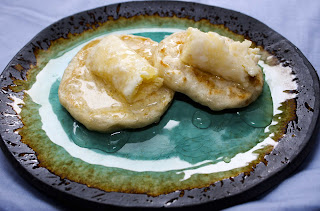 Ataïf, (atayef) or "arab pancakes" as Roden calls them in her book A Book of Middle Eastern Food, are a popular Middle Eastern sweet.  She writes that they were particularly loved by the tenth century Caliph Mustafi in Baghdad.  The recipe remains essentially unchanged, and ataïf are basically pancakes made from a very spongy batter, dipped in syrup and then either stuffed and deep fried or left in the shape of a pancake, panfried, and adorned with a cream made from buffalo's milk called eishta (I chose the latter method and that's the one I write about bellow).  Although Rodin does suggest that crème fraîche, whipped cream and clotted cream are all acceptable substitutions, they really are not the same thing as eishta.  In her newer book, the more opulently illustrated and physically weighty Arabesque: A Taste of Morocco, Turkey & Lebanon, Rodin makes no mention of eishta, assuming, I suppose, that the modern American cook is not going to be interested in a process that includes a 7 hour resting period before it's placed in the refrigerator over night.  In her chapter on Lebanon from Arabesque, Rodin offers a recipe for Tiny Open Pancakes with Cream and Rose Petal Jam, in which crème fraîche is recommended.
Roden published A Book of Middle Eastern Food in 1968, and was, along with Paula Wolffert, instrumental in introducing the cuisine of the middle east to an American audience.  Because her initial effort came out at a time when these foods were almost completely foreign to American and British audiences, it seems reasonable to assume that the more encyclopedic nature of Middle Eastern Food was meant as an introduction to an entire region and cuisine.  The book is only sparingly illustrated with small line drawings, and like the greatest food writers of her generation, Roden includes the historical and cultural background of many of the dishes (for example, ataïf are traditionally an important part of the wedding feast).  A general trend in cookbook writing is evident just through a comparison of Middle Eastern Food and Arabesque.  Where now Americans are familiar with the staples of middle eastern cooking, in Arabesque the emphasis is much more on adapting the process to a western kitchen, rather than documenting traditional methods and ingredients.
Traditionally, eishta (or kaymak in Turkish) is made from the thick cream that forms when rich gamoussa (buffalo milk) is boiled.  Customarily the cream is set aside after each boil for later use.  Rodin offers a recipe that uses heavy cream and milk instead, although I would imagine that if you can get your hands on some buffalo milk (and who knows, maybe you can) that the process is the same.  The eishta should become so thick that it can be cut by a knife and laid flat on pastries or curled into delicate little rolls. 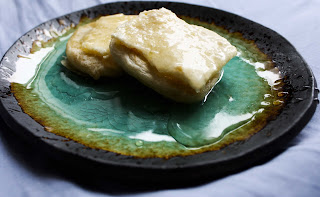 For the Eishta
1 1/4 cups heavy cream
5 cups milk
Combine the cream and the milk in as wide and shallow a tray as you have in order to provide the maximum amount of surface area (I used a large jelly-roll pan).  Slowly bring to a boil and then simmer gently over very low heat so that the surface just barely trembles and shimmers for 1 1/2 hours.  (Bring a book, Middle Eastern Food is a good choice!) Turn off the heat and let stand for 7 hours before refrigerating.  Chill overnight before using. A thick layer of cream should have developed on the surface of the milk.  Detach the cream from the pan, transfer to a plate and cut into squares.
For the Ataïf
1/2 oz (1 cake) fresh yeast or 1/4 oz (1 package) dried yeast
1 teaspoon sugar
1 1/4 cups lukewarm water
1 1/2 cups all purpose flour
Oil for frying
For the Syrup (this made a massive amount of syrup, much more than was needed.  Although delicious, if you don't want a ton leftover, I'd cut it in half.)
2 1/2 cups sugar
1 1/4 cups water
1 tablespoon lemon juice
1-2 tablespoon orange blossom water
Garnish- eishta and either chopped pistachios or almonds
Dissolve the yeast with 1 teaspoon sugar in 1/4 cup lukewarm water.  Let it stand in a warm place for 10 minutes until it begins to bubble.  Sift the flour into a large bowl, then add the yeast mixture and work it into the flour.  Add the rest of the water slowly, stirring constantly and vigorously, until the batter is smooth. Cover the bowl and leave it in a warm place for about an hour until it rises, and becomes bubbly and elastic.
To make the syrup, dissolve the sugar in the water with the lemon juice and simmer until it thickens enough to coat the back of a spoon.  Stir in the orange blossom water and simmer for 2 minutes more.  Allow the syrup to cool before chilling it in the refrigerator. When you're ready to cook the batter, grease a frying pan very well, and heat it until it is very hot.  Turn the heat back down to medium and pour 1 tablespoon of batter for each pancake into the pan.  The batter needs a little help in spreading, just use the back of a fork or spatula, but don't force it, it won't spread very much. Fry the cakes on both sides, working in batches.  When the frying is done, dip the pancakes in the syrup and garnish with the eishta and some chopped nuts, as is traditional, or add some rose petal jam to the top as Rodin suggests in Arabesque.
I simply cut squares of eishta and drizzled the orange blossom water syrup on top.  They were delicious and the eishta was completely worth it.  It's not particularly sweet, but it's luxuriously creamy.

*     *     *
I'm sending this post to Suzana at Home Gourmets for my second entry to Hey Hey It's Donna Day!  The theme is pancakes.
Email Post
Labels: A Book of Middle Eastern Food Claudia Rodin

Suzana said…
Very, very interesting and insightful post! Andrea, thanks for an exquisite entry to HHDD. I'll have to give it a try one of these days.
September 9, 2008 at 4:54 PM

Barbara said…
I've seen this style of pancake in a MOroccon cookbook. It sounds very interesting.
September 16, 2008 at 5:28 AM

Anonymous said…
I am a notoriously lazy cook/baker, so chances that I would make these pancakes are slim. But I'm pretty sure when I tell my boyfriend about it I'm going to be bullied into eventually making them. And I'm certain I won't be sorry!
September 16, 2008 at 5:57 PM

Susan said…
OMG, you made ataïf! I've been circling around Roden's recipe for years (have the cookbook); it's on my to-do list.

Middle Eastern desserts fascinate me.
Your results are truly lovely. That eishta is something else.
October 10, 2008 at 6:00 PM

Noor said…
Hi, how are you? My name is Noor and I live in Saudi Arabia. We eat this for breakfast and dessert a lot. Its really simple though. All you do is make any pancake recipe and you can make small ones or crepe size ones, then we put the creme you mentioned (spelled and pronounced qashta) here you buy cans of this creme. Its like a thick creme and they do not have it in the states but the closest thing they have is nestle thick table cream, it taste about the same but not as thick. We just make the pancakes dip it in sugar syrup (we also can buy this here made up in a bottle just like pancake syrup), then place the cream in half of the pancake, fold like a taco and add crushed pistachios. I always add more syrup on the table. Its so easy and yummy.
January 9, 2009 at 8:16 AM

Anonymous said…
Thanks for the information on Middle Eastern cooking as well as commentary about Claudia Roden's cook book evolution! I have a few of her books and was debating whether to get Arabesque. Sometimes shortcuts make life easy, but there are definitely times when it's worth the extra effort!
April 20, 2009 at 3:55 PM