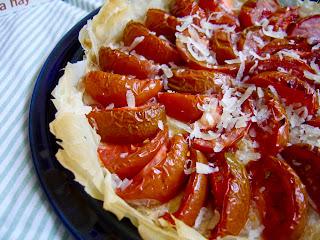 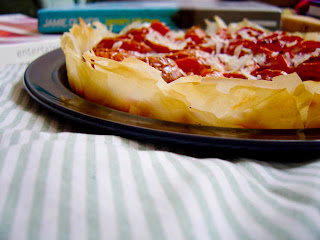 This one isn't from a cookbook, but came about because of my tendency to impulsively buy large stockpiles of fresh produce whenever I see something delicious looking.  Oh but were these heirloom tomatoes ever beautiful!
Fresh Heirloom Tomato Tart with Phyllo Dough Crust
A bunch of perfect looking heirloom tomatoes, too good to pass up
Package of pre-made phyllo dough
Olive Oil
Parmesan Cheese
Basil
Butter or Pam
Basically, I just prepared the phyllo dough crust the same way you'd made anything with phyllo dough, by brushing each sheet with melted butter (you can also use a misting of pam) and layering the sheets into a tart pan with a removable bottom.  Be careful to alternate the direction of the sheets so that there isn't one seam.  I prebaked the crust until it was a bit golden, then arranged the sliced tomatoes on top and baked again until they were roasted.  Once out of the oven, I added a little grated parmesan, a drizzle of olive oil and some basil.  Easy peasy!
Email Post
Labels: Original recipe