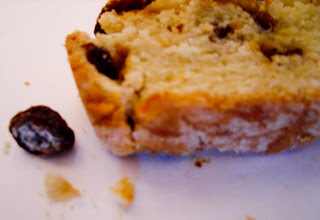 This is another one from Nick Malgieri's A Baker's Tour.  It was also my first experience with yeast, that most intimidating of unicellular fungi . Malgieri says that this is a popular brioche from Belgium, more specifically from Wittamer, which he calls the best pastry shop in Brussels.  According to the Bible, Larousse Gastronomique, adding raisins is a traditional variation on brioche, which probably gets its name from an old Norman form of the verb broyer meaning "to pound" (although I didn't do any pounding with this one!).  Malgieri calls this a "lean" brioche, and indeed his recipe calls for half the amount of butter as the classic brioche recipe from Larousse.  Aside from being lean, this brioche is also comparatively quick.  Malgieri calls for only 2, 1-hour long rising periods, whereas in Larousse the bread must rise twice for 2-3 hours each time, and in another canonical work, La Bonne Cuisine de Madame E. Saint-Ange, the Madame asks that the dough be made the night before so it can rest all night in a cool place.  She also prescribes two rising periods, the first of 4 hours, and the second of 2. Madame Saint-Ange also calls for punching the dough down between the rises, which Malgieri does not.
For me, something went wrong with this recipe because the bread didn't rise enough the second time.  Normally the second rise is a bit shorter than the first (again, according to the Madame) but even after more than an hour my brioche was just not there.  I baked it anyway and came up with a still delicious, yet slightly denser bread than what I believe was intended.  Still, a worthy first experience.
Raisin Breakfast Bread
2 cups all-purpose flour (spooned into cup and leveled off)
2 teaspoons active dry yeast (2 packages)
1/2 cup warm milk
2 large egg yolks
4 tablespoons (1/2 stick) unsalted butter, very soft
1 teaspoon salt
3/4 cup dark raisin (next time I might soak these in rum)
One 8 1/2 x 4 1/2 x 2 3/4 inch loaf pan, buttered and lined on the bottom with parchment paper
Whisk the yeast into the milk, then whisk in the yolks.  Add the liquids to 1 1/2 cups of the flour in the bowl of an electric mixer.  Mix on the lowest speed in a mixer fitted with the paddle attachment, for approximately 2 minutes.  Let the dough rest for 10 minutes.
Add the butter, sugar, salt and 1/2 cup flour and mix again on the lowest speed until it's all combined. Turn the speed up to medium for another 3-4 minutes, until the dough is smooth and elastic. Beat in the raisins at the lowest speed.
Turn the dough out into a buttered bowl, and then flip the dough over so that the top is buttered. Press plastic wrap against the top and let it rise until doubled, about 1 hour. Turn the risen dough out onto a floured surface and press it into a rectangle.
To form a loaf stretch the dough into a rectangle a little larger than your pan, then fold in the sides beginning with the short sides so it maintains a rectilinear shape. Next fold the longer sides over so that the create a seam down the center. Be sure your loaf is of a consistent thickness all the way through.  Place the dough in your prepared pan, seam side down, cover with buttered plastic wrap, and let rise again for about 1 hour.
Once the dough is doubled, set the pan in a 400 degree oven on the middle rack and bake until it is golden brown, about 30 minutes.  Remove the loaf from the pan and let cool on its side.
Email Post
Labels: A Baker's Tour Nick Malgieri