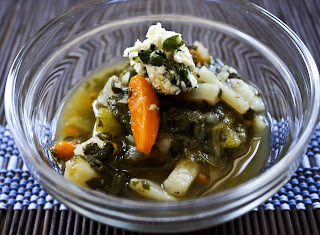 In this recipe from her book The Peasant Kitchen, Perla Meyer's says that there are no limits to vegetable soup, based on the season and on the availability of ingredients.  I took this to mean that I could throw whatever I had sitting around from the farmer's market into the pot.  So that's what I did, while still trying to maintain the general outline of her recipe.  I've noted my changes in ingredient list below.  I thought briefly about using what I lovingly refer to as the tomato guts from the stuffed tomatoes that I just made, but decided that I wanted this to be a clear, green soup as Ms. Meyers intended.  However, I do have to say that given the veggie substitutions I made, her cooking times were far too long for my version.  The veggies pre-bean only really needed to be simmered for around 45 minutes, and then the beans can be added. Also, watch carefully as the veggies did tend to soak up a large amount of the stock while simmering, and I had to add a few cups of water to maintain the consistency.  The compound butter really makes this soup come alive, so don't skip it.  A little goes a long way anyway, and I actually only made half of what her recipe called for.  Also be sure to remember the bread.  After all that time spent making the stock, you must have something to mop up every last drop. 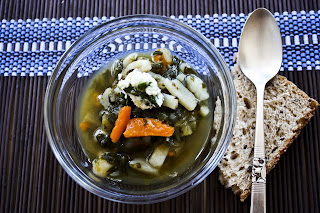 Soup Julienne
For the compound butter:
4 tablespoons soft butter
2 tablespoons minced parsley
2 garlic cloves, passed through a press
Salt and white pepper
For the soup:
8 - 10 cups chicken stock
2 potatoes, peeled and julienned
2 turnips (I used 4), peeled and julienned
2 celery stalks, peeled and, you guessed it, julienned
2 cups shredded cabbage (I used spinach)
2 carrots, peeled and...
5 peppercorns
1 cup green beans, trimmed (I used cranberry beans, removed from the shell)
1 cup fresh peas (I left these out, since it is no longer spring)
(I also added a bunch of watercress)
For the butter, combine all ingredients and mash with a fork until blended.  Chill until ready to serve.
For the soup: combine the stock and the first 7 ingredients, along with a generous pinch of salt.  Bring to a boil, then reduce the heat and simmer, covered, for 1 1/2 hours.  Add the beans and peas and cook for 30 minutes more.  Taste and correct the seasoning if necessary.
To serve, spoon the soup into individual bowls and top each with a pat of compound butter.
Email Post
Labels: Perla Meyers The Peasant Kitchen