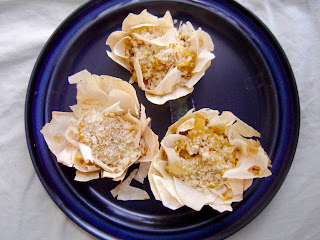 I put these little treats together some time ago, and now the exact process escapes me.  I had some summer squash and some golden bell peppers from the farmer's market that needed to be used, and some phyllo dough whose turn was also coming up.  I made the phyllo dough tarts in the same way as with the Heirloom Tomato Tart, only instead of a large tart pan, I lined a muffin tin with the phyllo dough sheets and pre-baked them until they were golden. I finely diced half of the squash and peppers, and used the food processor for the other half.  I thought having some larger chunks from the hand dice added some nice texture, and prevented the filling from becoming too mushy.  I heated some oil in a large pan and sweated some onion until it became translucent.  I then added the squash/pepper mixture, along with some soy sauce and a shot of pomegranate molasses.  Once the filling was cooked through, I strained it out of the broth that was produced by the veggies cooking down, and returned the liquid to the stove to reduce into a kind of glaze.  In the meantime, I spooned the mixture into the pre-cooked tarts, drizzled some glaze over the top and finally topped with a few spoonfuls of panko bread crumbs.  Back into the oven it went until the bread crumbs were crispy and the phyllo dough golden brown.  Voilà!
In the future, I would use green and red bell peppers in place of the golden ones for extra color, and I might mix the panko with some kind of fresh herb.
Email Post
Labels: Original recipe