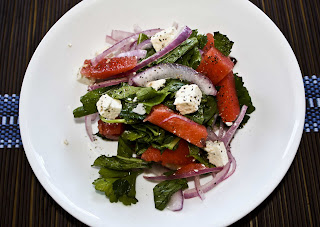 I don't remember where I originally heard of putting watermelon and feta together.  Nigella's done it, and a recipe also appeared in the September 2008 issue of my favorite food magazine, Saveur, in an article dedicated to watermelon.  It's a classic Greek combination, where sweet watermelon provides the perfect complement to the salty cheese.  I've made Nigella's recipe before, and I loved how her red onion gets marinated in the lime juice.  However, I also liked the idea of including arugula as in the Saveur recipe.  So I've combined the two and come up with what I find to be the best of both worlds.  As with all salad recipes, the amounts are somewhat arbitrary, so add more or less of what you like. 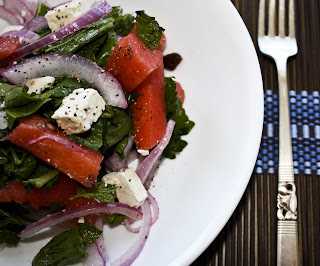 Watermelon, Feta and Black Olive Salad
1/2 watermelon, fruit removed from the rind, seeded and cut into bite-sized chunks
1 cup parsley leaves
1 cup mint leaves
3 cups arugula
20 or so black olives, pitted and chopped
A brick of feta cheese, crumbled
1 small red onion, peeled, halved and cut into thin half moons
2-4 limes, depending on juiciness
2 tablespoons olive oil
Salt and Pepper
Place the onion slices and the lime juice in a small bowl and allow the onion to marinate in the lime until the onion almost glows and is sitting in a pool of pink juices.  Place the watermelon chunks, parsley, mint, arugula, olives, and feta in a large salad bowl.  When the onion is well-flavored, add it to the bowl along with its liquid to act as a dressing.  Add the olive oil and salt and pepper and toss.  Be gentle so that you don't break up the chunks of feta too much.  Taste and correct the seasoning, adding more lime if necessary.
Email Post