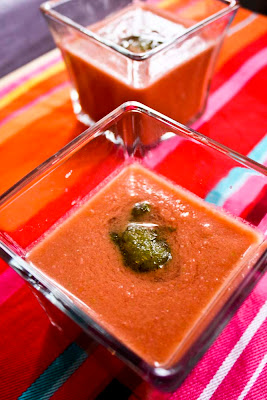 Don't let the idea of cherries and beets in your gaspacho throw you.  This is a delicious little number from The New Spanish Table by Anya von Bremzen that in no way tastes like a strange combination of sweet cherries and earthy beets.  You don't really taste the beet at all, in this dish, it's more show than substance (that beautiful punk hue!), and despite the cherries, this is still very much a savory soup.  Cherries are out of season here, but Bremzen suggests using the canned sour cherries that come in jars (NOT maraschino) and are imported from Eastern Europe, so that's what I did.  It worked out beautifully, and saved me from having to pit a bunch of cherries. 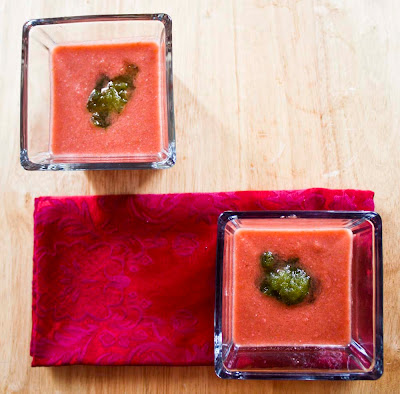 Bremzen writes that if paella defined the Levante region, gazpacho is "the edible emblem of Andalusia."  For Bremzen, the defining ingredient in gazpacho is bread, not insipid canned tomato juice or chunks of floating celery.  Although there are plenty of versions of the liquid salad based on tomato, that is not gazpacho's only incarnation, as evidenced by the recipe for Almond Gazpacho with Figs that she provides, in which tomatoes are nowhere to be seen.  Bread, Bremzen maintains, is what makes gazpacho a meal, rather than a sip.  Indeed, the earlier gazpachos, the ones predating the introduction of tomatoes and peppers into Spain in the 1500s, were rustic porridges made up of crustless bread, garlic, vinegar, oil, and anchovy bones (yikes!).  Gazpacho in its modern form really took off in the early 19th century as summer fare for Andalusian workers toiling away in the olive groves.
For this particular twist on gazpacho, Bremzen credits food maverick Dani García, famed for his use of liquid nitrogen in his high-tech kitchen.  This recipe is not so scientifically informed, but it is a real treat when garnished with a little leftover Mint Granita on top. 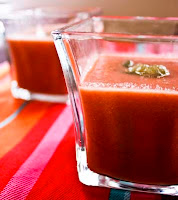 Cherry and Beet Gazpacho
1 medium beet, stem removed
1 3/4 pounds lovely ripe tomatoes, seeded and chopped
2 cups pitted Bing cherries or jarred sour cherries
1 medium Italian frying pepper, cored, seeded, chopped (I didn't fine one right away, so I used an Anaheim pepper.  Do yourself a favor and use gloves when seeding this sucker)
1 medium cucumber, peeled and chopped
1/2 a medium red onion, chopped
2 garlic gloves, passed through a press
Coarse salt
1 3/4 cups day-old country-style bread, crusts removed
1/2 cup olive oil
4 - 6 tablespoons sherry vinegar (I found 4 to be sufficient)
About 1 1/4 cups water (she suggests chilled, bottled spring, but I'm not such a high roller)
Minty Granita for garnish (I highly suggest treating yourself to this little pleasure.  It adds an entirely new dimension of yum.)
Oven preheated to 400, wrap the beet in aluminum foil and roast about 1 hour.  Run it under cold water, and slip off the skin.  Allow it to cool completely, then dice.
Place the first 7 ingredients in a large bowl (if you're using canned cherries, drain them and reserve 1/3 cup of the juice to add back into the soup), sprinkle with salt, and let sit for about 15 minutes
Cover the bread with cold water and let it soak for 5-10 minutes, then drain and squeeze the excess water out of the bread.  Add the bread to the vegetable mixture.
At this time, if you have an immersion blending, you're golden.  Just add the reserved cherry juice (if using) and the oil to the vegetable mixture, turn on your trusty immersion, and blend away.  If you don't, you're going to have to do it in a food processor/blender, in two batches.  So add half the oil and cherry juice to each batch before you blend.
Add the vinegar to the blended mixture, along with enough water to bring it to the consistency you prefer.  Taste for seasoning and add more vinegar/salt if necessary.  Refridgerate your gazpacho for 2 hours before serving.  Top with a little dollop of Mint Granita.

Anonymous said…
Interesting gazpacho! The New Spanish Table isn't part of my collection yet, but it needs to be!
September 30, 2008 at 4:42 PM

Unknown said…
Tried this in May at the first sighting of fresh cherries, which of course weren't up to peak flavor, but was good anyway. I served it with a quinelle of orange ginger creme fraiche semi freddo that when mixed in gave another dimension of flavor.
May 11, 2011 at 12:44 AM