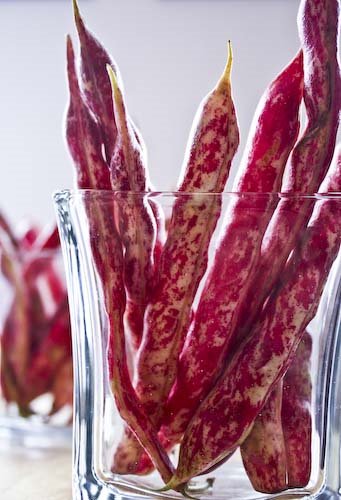 Aahh the cranberry bean or borlotti bean as they're known in Tuscany.  It's been making the rounds around blogs lately, and why not?  It's a beautiful little bean, fuchsia with specks of cream on the shell with an inverse pattern on the bean itself.  It's always a little disappointing to use them, however, as they become a dull gray with cooking.  Evidently, there were once very common beans, and in her book Vegetable Love, Barbara Kafka  calls them "the most widely available of shelled beans sold fresh."  However, in his tome American Cookery from 1972, James Beard acknowledges that the beans had become "much less popular these last twenty-five years than they used to be."  I never see them now except at farmers markets, and then they are wildly expensive.  Usually.  Until I happened on a small market that is held every thursday right by my apartment.  I snagged an entire bag-full for two bucks!
Kafka provides a useful table for gauging yields and equivalents.  She says that 2 1/2 pounds in the shell will result in 1 1/4 pounds shelled, that 12 ounces in the shell will yield 1 cup of raw, shelled beans, and that once cooked 4 cups of raw beans will yield 5 cups of cooked ones!  Beard also suggests allowing for 1 pound of beans in the shell per person.  I'm never so specific with my beans, preferring instead to dig around the basked until I'm satisfied. 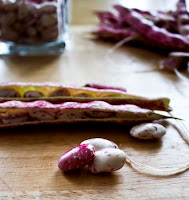 BBC Food says that they're a type of kidney bean, and a good substitute for cannellini beans if you've got your heart set on them.  I've also read that they can be interchanged with pinto beans and red kidney beans, the latter being not quite as good a substitute.  Beard describes them as mealy in texture, which I can definitely see, but they have a nice subtle flavor.  There's plenty of information on them floating around the internet, such as here and here, and since this is a common bean in tuscany there are many Italian preparations that call for them specifically. 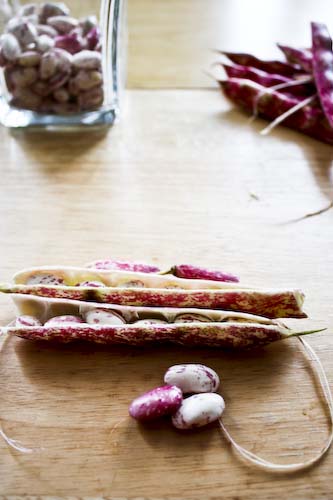 The Silver Spoon provides recipes for borlotti, barley and legume soup; scrambled eggs with borlotti beans; and a turkey and borlotti bean salad.  For cooking, Beard suggests bringing water to a boil, adding the beans, then reducing the heat to low and cooking the beans covered until they are tender.  He then directs to drain the beans and return them to the pan to dry out.  He says that it was once customary to add bacon, smoked jowl or salt pork to the beans while cooking, and to serve the bits of meat along with them at the end.  However, as with so many of my farmers market impulse buys, I felt like having something simple, something in which the beans were the star and to which I did as little as possible. 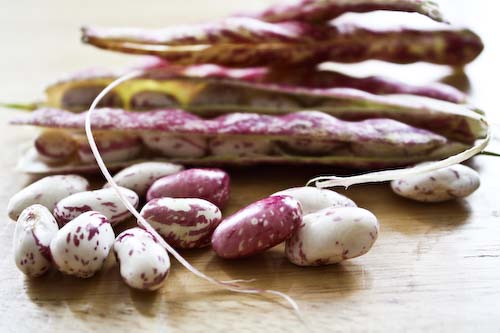 To that end, I took the advice here, and simply boiled them for about 15 minutes until they were soft, but not falling apart.  I then drizzled them with a bit of olive oil, popped a can of tuna and had a simple, very satisfying, light lunch.

Snooky doodle said…
wow you amaze me with your writing I really enjoy reading your posts. Thanks for visiting my blog and answering my question. Those beans are so nice didn t know they are that colour before they are coked . I lawys ate them ready cooked :-)
October 4, 2008 at 3:55 PM

Dana Treat said…
I love Borlotti beans! Last year, I bought a bunch at the farmer's markets that were already shelled - expensive but with no waste. The best part about them is that I froze them so I always had "fresh" beans at the ready with no need to soak. You reminded me that I need to seek them out before they are out of season! Thanks!
October 5, 2008 at 8:44 AM

Anonymous said…
Beautiful picture! I can't find these beans here. I'm going to search them out when I go to ATL on Thursday.
October 7, 2008 at 2:30 PM

Unknown said…
I made Pasta e fagioli (past an beans) soup. I tried pinto beans, but they seem blander than borlotti. I actually liked using black beans instead.
February 15, 2017 at 2:50 AM