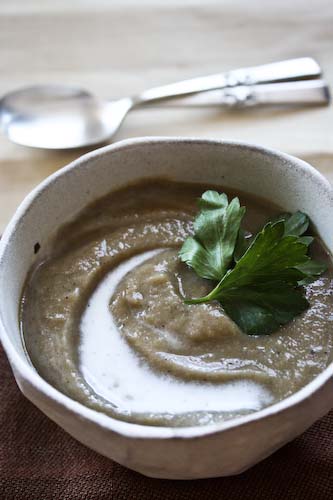 After the Basmati Rice with Cauliflower and Almonds, I had half a head of cauliflower left and not enough will to simply steam it (for me cauliflower needs much more than that).  I thought I'd keep with the Indian theme, so I turned to Madhur Jaffrey and her Quick & Easy Indian Cooking.  I'm a newbie with Indian cooking in every way.  I hardly know my way around all of those spices and am still easily mystified.  This recipe, however, I could handle.  Jaffrey is quite a woman, I must say, both an actress and a highly successful cookbook author.  She was instrumental in introducing Indian cuisines to the West, and has won several James Beard awards.  You may have seen her in a guest appearance on Law and Order: SVU and not even have known it. 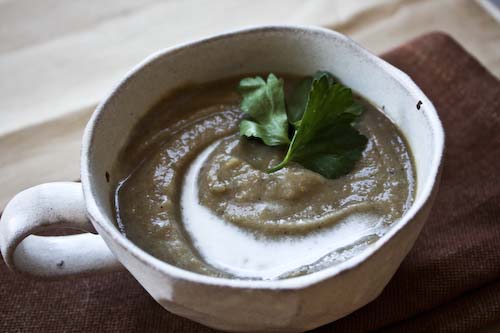 Quick & Easy Indian Cooking was written to make India's sometimes intimidating cuisines more accessible to the Western cook, and I think Jaffrey achieves that aim.  Most recipes in the book can be made in under 30 minutes, but I'm not holding anyone to specific time constraints.  The trick is in simplicity here, where a shorter list of ingredients makes for a tasty final dish.
I followed the recipe pretty much exactly, but I replaced the 2/3 cup heavy whipping cream with milk.  I'm trying to keep things a bit light around here! Also, the purple cauliflower made the soup a kind of earthy color, or as R called it, healthy looking. 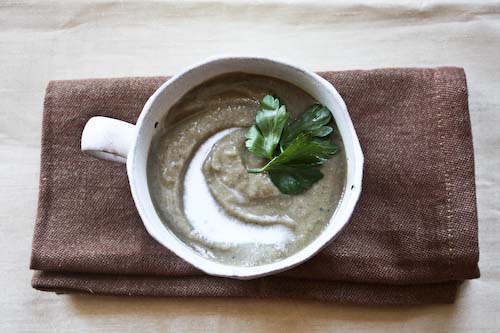 Gingery Cauliflower Soup
3 tablespoons vegetable oil
1 medium onion, peeled and chopped
1" piece fresh ginger, peeled and slivered finely
4 cloves of garlic
1 teaspoon ground cumin
2 teaspoons ground coriander
1/3 teaspoon ground tumeric
1/8-1/4 teaspoon cayenne pepper
2 medium potatoes, peeled and cut into 1/3" dice
2 heaping cups cauliflower florets
5 cups stock
Salt
2/3 cup milk
In a large pot, heat the oil on medium-high and cook the onion, garlic and ginger for about 4 minutes, until browned.  Add the cumin, coriander, tumeric and cayenne, stir briefly, then immediately add the potatoes, cauliflower and stock.  Bring the mixture to a boil, then reduce the heat to a simmer, cover, and continue to cook for 10 minutes.  At this point, the potatoes should be soft.
If you want to achieve a silk-smooth texture, blend the soup in as many batches as necessary before returning to the heat and adding in the milk/cream.  If you're kind of lazy (like me) and don't mind a little texture in your soup, you can also use an immersion blender.  Once the soup is blended, stir in the milk and serve.
Email Post
Labels: Madhur Jaffrey Quick and Easy Indian Cooking

Sam said…
Looks like an interesting alternative to the normal creamy cauliflower soup.

Snooky Doodle, not much of a soup person, huh? That's okay, because we love you for your crazy good desserts anyway!

Anonymous said…
I love Indian spices; I use them in a lot of soups, in all sorts of combinations or alone. I especially enjoy curry spices with pumpkin.
October 23, 2008 at 6:00 AM

Anonymous said…
This looks delicious. We've been trying to find ways to make cauliflower more palatable, and this looks like it fits the bill.
October 23, 2008 at 5:32 PM

geovani said…
Stir and bring to boil. Cover and turn heat to low; simmer gently for 10 minutes or until potatoes are ender. Put soup into a blender and blend or use a hand blender to purée. Add cream and reheat gently.
---------------
geovani

Andrea said…
Eric, curry and pumpkin sounds like a wonderful combination! I'll have to give that a try.

Fearless Kitchen, I always feel like I have to do something to cauliflower as well. This soup dresses it up, but maintains the nutty cauliflower taste. Thanks for stopping by!