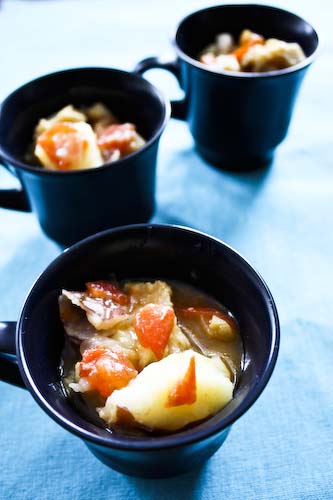 My fiancé claims to hate fish.  Just my luck, I find the only Scandinavian in the world with an almost visceral aversion.  But he can be a bit, shall we say, inconsistent in his proclamations.  For instance, he's happy to eat these crazy fish balls that are sold in cans in Norway.  He'll even eat them as leftovers, once the fish smell he claims to hate so much has had a chance to mature into an almost vision-blurring oder.  Anyway, the point of this little story is that another exception he has somewhat arbitrarily made is bacalao, or the Nordic salt cod that the Spanish so worship.  He's been requesting it for quite some time, but I have to admit to being a bit intimidated by the thought of it.  However, as I was flipping through my recent favorite book The New Spanish Table, I found that Anya von Bremzen dedicated one of her immensely  informative and always entertaining sub-sections to the history, handling and cooking of  salt cod.  Well, if Bremzen thinks I can do it, I'm willing to give it a try.
It seems that the Vikings first developed a method for air-drying cod, one which was later perfected by medieval Basques who applied to cod the technique they had been using to salt-cure whale meat.  When looking to purchase your little hunk of salted deliciousness, Bremzen suggests trying Italian and Portuguese markets, and says to look for thick, white, boneless pieces at least 3/4" thick.  If you're in New York, I found mine at The Lobster Place in Chelsea Market (any excuse to go to Chelsea Market!). 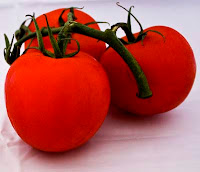 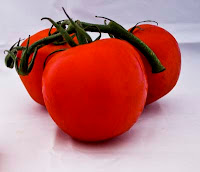 Since bacalao was the fiance's request, he also had a specific way he wanted it cooked.  Bremzen offers recipes for baked potatoes stuffed with bacalao, bacalao fritters, bacalao in a tortilla with green peppers, a bacalao hash, and even in Lenten empanadas with golden raisins. No, no, no, no, no.  None of it would do.  So the search lead to Simone and Inés Ortega's tome 1080 Recipes, which has been labeled the Spanish Joy of Cooking and "the bible of authentic Spanish cooking."  A no-nonsense classic of the Spanish kitchen, 1080 was originally directed at a frugal post-Franco audience, by a French-born (but Spanish married) author who wanted to demystify Spanish cooking.
Lisa Abend has claimed that 1080 lacks certain captivating elements such as the traditional descriptive names of each dish.  In fact, Abend even asserts that "this is not Anya von Bremzen's gorgeously photographed and exuberantly researched New Spanish Table" (told you it's a good one!).  But, 1080 does have the recipe for Potato and Bacalao Bouillabaisse (number 545), for which my fiance had the craving in the first place.  Also, I have to admit, that I find the line drawings in 1080 altogether charming, and there is a certain graceful simplicity to the bare-bones list aesthetic.

I used Bremzen's instructions for desalting the cod because, well, I like her. She cautions that depending on the quality of the fish and the salting method used, it can take anywhere from 24 hours to two days to desalt and reconstitute bacalao.  To do it properly, simply place your fish in a wide bowl, cover with cold water by two inches, cover the bowl and refrigerate.  The fiance claims that in Norway they don't refrigerate, but they are hardier folks than I! Let the fish soak for 24 hours, changing the water four or five times.  Taste after 24 hours (don't worry, it's fully cured and safe to eat!) and if it's not quite to your liking, continue to desalt.
1080 suggests serving fried bread slices with this recipe, which is something I did way back when.  So if you want to, you can use that same method.  As for us, we're sticking with fresh bread because, well, we're on a diet (yea right).
Potato and Bacalao Bouillabaisse
5 Tablespoons olive oil
2 onions, finely chopped
3 cloves garlic, passed through a press
2 tomatoes, peeled, seeded and chopped
Pinch of dried herbs or 1 bouquet garni (thyme, bay leaf and parsley in cheesecloth)
2 1/2 pounds red-skinned potatoes, cut into 1/2 inch thick slices
pinch of saffron, crushed in a morter
14 ounces salt cod (bacalao)
Salt (this was not necessary for me)
In a large, heavy pot, cook the onions in the olive oil over low heat, stirring occasionally, for about 5 minutes.  Onions should be soft and translucent.  Add the garlic, and cook for a few minutes more, stirring frequently.  Next add the tomatoes, and continue to cook for another 5 minutes or so.  Pour in 8 3/4 cups water, add the herbs and potatoes, and bring to a boil.  Stir the crushed saffron into 2-3 tablespoons of the cooking liquid, and then add to the pot.  Simmer for 20 minutes.  Drain the cod, be sure all skin and bones are removed, then flake the fish into large, delicious looking chunks.  Add the fish to the pot and cook for another 10 minutes, until the potatoes are done.  Season to taste with salt and serve.
*     *     *
And now,  a word about saffron. 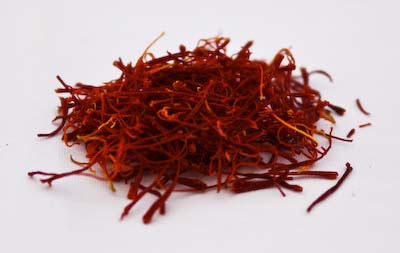 Bremzen calls saffron "Spanish gold" and indeed it is both cultivated in Spain (among other places), and intrinsic to many characteristically Spanish dishes. It is also worth its proverbial weight. Writing for the periodical Economic Botany, C.L. Madan (et. al.) provides a brief history of the spice, whose name is derived from the Arabic word "azaferan."  Saffron has been prized as a drug and as an element in ritual and in worship, and was first introduced in Spain by the Arabs in around 921 c.e. Because of the laborious process required to harvest saffron, it is one of the world's most expensive substances, and most beautiful. 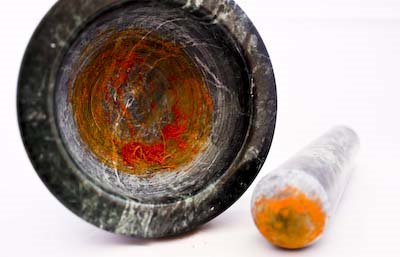 Saffron is normally steeped before using (as it is in this recipe when it's combined with a few tablespoons of the cooking liquid).  Generally, the longer you steep it, the stronger the color and flavor.  Evidently, if you're super frugal, you can steep it, use the liquid, and then reserve the threads themselves, dry them and re-use them at a later date!  I figured my fiance's willingness to eat fish was a cause to go crazy and just dump the saffron, cooking liquid and all, right into the pot. 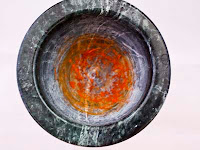 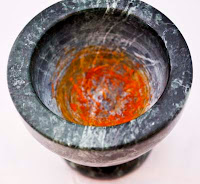 Vera said…
Andrea, the dish looks and sounds delicious!
P.S. Thank you very much for your kind comment on my blog. I'm deeply touched.
October 3, 2008 at 7:57 PM

Helene said…
Looks delicious! It's been forever since I last had bouillabaisse!
October 4, 2008 at 7:21 AM

Anonymous said…
Sounds so good and elegant with the saffron. I've only tried a bacalao dish recently so now I know what the fuss is about.
October 4, 2008 at 7:59 PM

Maggie said…
I love how few ingredients there are in the recipe. It sounds delicious. Your photographs are really inspiring!
October 5, 2008 at 4:33 AM

Anonymous said…
I never call it just "saffron," it's always "saffron, the world's costliest spice..." I have to add that epithet. I've even write it like that in recipes.

Sam said…
Found this page searching for this recipe to share with a friend. I'm eating my leftovers for lunch now and it's delish. In some ways more satisfying than traditional bouillabaisse because so much more simple, and the saffron's a great touch. Thanks for this informative post.
February 13, 2009 at 7:52 PM