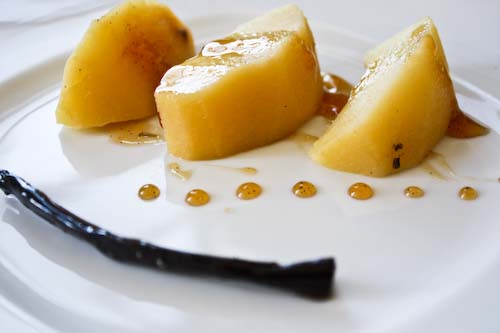 I had seen fresh quince at the farmers market last year, but I didn't really know what they were or what to do with them.  I had really only experienced them in their paste form which the Spanish call membrillo and which is often eaten with cheese.  When they reappeared this month, I impulsively bought some.  I checked a few sources for what to do, Mark Bittman's How to Cook Everything Vegetarian had some basic information, as did that old stand-by James Beard in American Cookery.  But the topic was best covered in Elizabeth Schneider's Uncommon Fruits and Vegetables: A Commonsense Guide.  Like so many other fruits and veggies, the quince was once a staple in American kitchens before the mass industrialization of our food.  Schneider calls it the "quintessential put-up fruit" because it is so rich in pectin it was a natural candidate for jellies, jams, candies and marmalade.  In fact, the word "marmalade" actually comes from the Portuguese word for quince, which is marmelo. 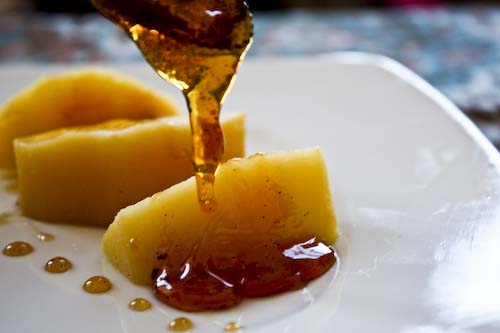 When choosing your quince, Bittman says to look for firm, golden yellow fruits, which should be wonderfully fragrant.  Don't, however, let their intoxicatingly tropical scent, almost an anachronism in these colder fall months, fool you into digging into one raw.  Their intense astringency requires that they be cooked before consumption.  Also, some quince varieties have a somewhat fuzzy skin, and that's just fine.  You're going to be peeling them anyway. 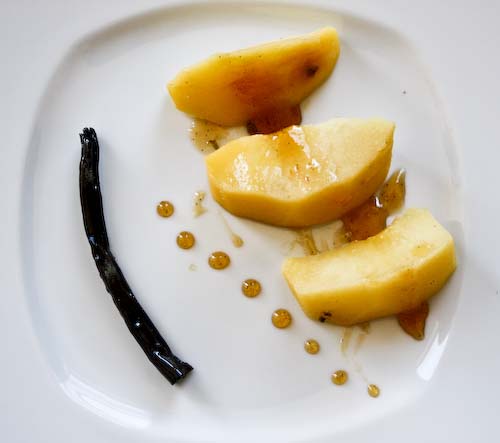 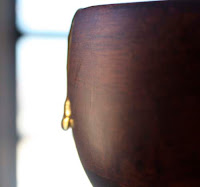 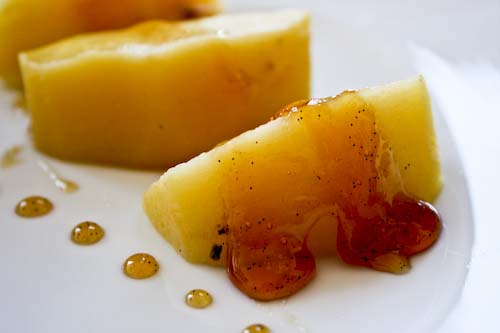 Bittman offers up the quince as an alternative in his Poached Pear recipe, as well as a recipe for Quince-Ginger Soup, which just might make an appearance here before too long, while Beard suggests that they be baked.  Elizabeth Schneider suggests honey-baking them, stewing them with lamb and saffron and baking them with chicken, as well as the classic quince marmalade among other things.  If I were ever to come into a windfall of quince, this is definitely where I'd turn. 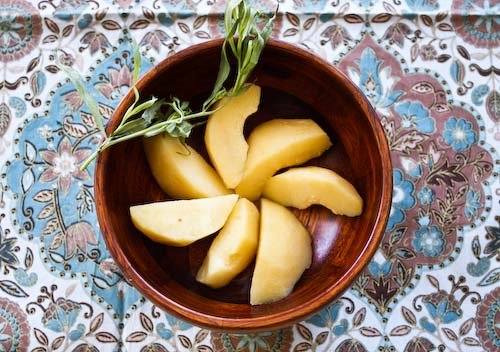 For today's experiment, however, I was instantly drawn to the Wine Poached Quince recipe in Joel Patraker and Joan Schwartz's The Greenmarket Cookbook: Recipes, Tips, and Lore from the World Famous Urban Farmers' Market.  After all, I do owe my discovery of a handful of treasures to this particular greenmarket. 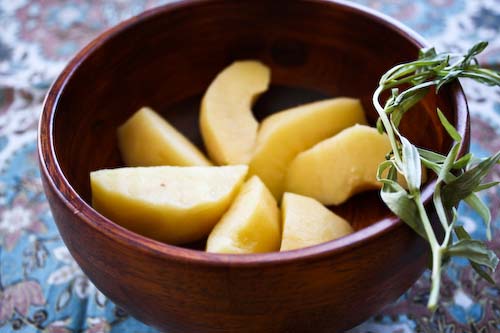 Wine Poached Quince
4 quince
1 bottle dry white wine
1 cup water
1/2 cup sugar
1/2 vanilla pot, split with beans scraped out
3 sprigs tarragon
Peel your quince and set them in a bowl of lemon water to prevent browning.
Place the quince in a pot large enough to hold them in a single layer.  Add the rest of the ingredients and bring the liquid to a simmer.  Cook for 30 minutes, turning occasionally, until the quince are tender.  Allow the fruit to cool completely in the poaching liquid before removing them.
Quarter and core the quince (Bitmann warns that the seeds are very mildly poisonous, so there's no sense in eating them) and place them in a bowl.  In the meantime, return the poaching liquid to a boil and let reduce by half until you have a lovely syrup.  This should take about 15 minutes.  Let the syrup cool, then strain it over your quince.  Delicious! 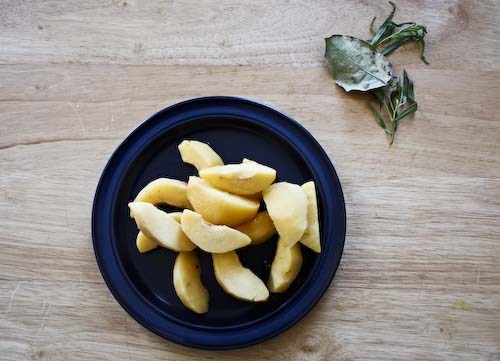 In a moment of inspiration taken from Tara at Seven Spoons and her Happenstance series, I snapped this photograph of the leftovers once all the styling was finished.

jenniferhoiyin said…
love this, I've never had one before either.

Anonymous said…
oh, hey, i just bought 8 lbs of quinces :D i wanted to make quince paste and cut them into squares for snacks :D
thanks again for the award Andrea, i just finished writing a post about it ;P
November 1, 2008 at 11:25 PM

Andrea said…
Thanks Jen and Joanna, I enjoyed my first quince experience!

tara said…
When you do such lovely work all on your own, I am astounded to think I could have been even a minor inspiration. Keep up all the loveliness.

Wonderful information and background on quince; I adore quince jam.
November 3, 2008 at 10:42 PM