Does Cooking Make You a Girl? 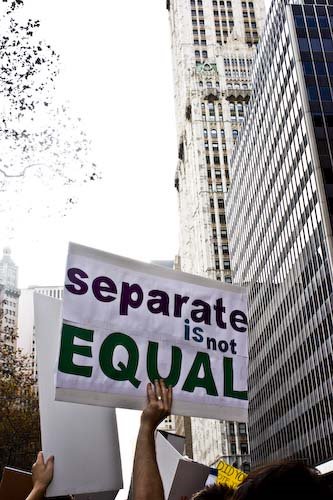 Recently, I was lucky enough to participate in a pro-equality rally here in NYC, protesting the passing of Proposition 8 and the de jure discrimination that it entails.  I wrestled with the idea of allowing politics onto my blog, but I'm also a firm believer that nothing (not art, not culture, not food, nothing) can actually be separated from politics.  And although I'm not here to talk about that particular rally, it did get me thinking, mainly about the systemic inequalities that have become so ingrained that we actually view them as natural.
Then, during a sleepless night, I was aimlessly surfing the web and I came upon this article, titled Does Cooking Make You Gay on Serious Eats, written by Adam of the ever-popular Amateur Gourmet almost one year ago (man, am I slow on the uptake or what?!  But I figure, if it's new to me, maybe it's new to you as well!).  While Adam makes some interesting points, ever the academic, I couldn't help but notice how his article fundamentally supported the binary structure that pits male against female and inevitably elevates the former at the expense of the latter.
Very unfortunately for me, I am crappy at math.  Even worse, I have THE lousiest sense of direction.  In fact, sometimes I'm amazed that I can navigate three-dimensional space at all.  For those of you who grew up in the late 80's, early 90's and were subjected to the regular rhythm of standardized testing, do you remember the exercise in which you were shown how a piece of paper was folded, where a hole was punched in the paper and then expected to unfold the paper mentally and recognize the pattern that the hole would make in the paper?  Well, I failed that portion spectacularly.  I think I scored something like 20% which is near "can't tie my own shoes" level.  Furthermore, here I am today, a PhD student in the girliest of subjects: Art History.  And, to top it all off, I love to cook, write a food blog, and think endlessly about grocery shopping.  So I am clearly not the example to disprove the rule.  But we should all be able to agree by now that the rule has, in other cases, been disproved.  (As an aside, I've also finished 3 Ironman triathlons and do not attribute my lack of ability in math to being a girl, but rather to being uninterested.  Here, I am dividing my own activities up along gendered lines to prove a point: that such division is itself pointless.)
And yet this constant divide exists.  Traditionally, women cook at home because it's expected, men cook as a profession out of choice.  "Women's work," the kind done in the home, is not "real" work, it doesn't require a degree or specialized training other than that which can be self-taught or taught by another woman.  And often this attitude carries over into the public workplace as well.  In art, there has always been a divide between craft and fine art, and although craft is not a uniquely female pursuit (think woodcutting and furniture making), the feminist movement has allowed for a certain upsurge in interest in traditionally female activities like quilting.  Is there anything inherent in the act of making a quilt which should cause it to be read as feminine?  Or is that a societal condition imposed on it from without?  The assumption is now that perhaps quilting as an artform need not be written off merely because it is traditionally done by women, whereas the grand masters of painting are all, well, men.  (If you're interested in a structural reading of the inequalities that promote a male-dominated art world, I'll point you to the final essay in this book.)
In his article, Adam keeps coming back to the question of whether or not cooking is an "effeminizing" activity for a man to participate in.  Like, will a man catch the girlie bug (aren't those called koodies?) if he does it.  When the real issue is the division of labor along gendered lines in the first place.  The problem is not do men feel, or are they thought of as, "feminine" (and therefore inferior) when they cook, but why is home cooking (or any cooking for that matter, or any activity if you really want to get into it) cast as a gendered activity in the first place? And why is being associated with the feminine bad?  Adam asks, somewhat tongue in cheek I hope, if cooking denotes a lack "of the basic male instinct to hunt the food rather than prepare it."  But in many societies, both genders did the hunting, and besides, gathering is a much more reliable source of food than running around chasing animals, and requires just as much, if not more, skill and knowledge (one wouldn't, after all, want to feed baby a poisonous plant, that is not good survival strategy in the least!).
So anyway, the real point I want to make is that these are all just silly, societal constructs in the first place, and we must be careful about confusing the social with the natural.  Homophobia and sexism are, after all, two sides of the same coin.  And this is a great example of how both of them hurt everyone, men (straight or gay) included.  Insulting a boy who's interested in cooking by calling him a girl (no matter his sexual orientation) limits his possibilities as much as it "others" his sister.  Being a girl is not somehow a state of inferiority.  And girlie characteristics are more often than not societally, rather than naturally, dictated anyway.
Weww, rant over.  What do you think?
Email Post

veggie belly said…
This is very thought provoking. What makes you "girlie" or not is such a social construct. There are cultures where perceivedly effemenite characteristics are considered desirable - even in men (but unfortunately cooking isnt one of them!). Why do we judge/label others based on our own limited context?
November 18, 2008 at 8:14 AM

Merith said…
my friends/colleagues and I have been discussing similar aspects in architecture - from the way women seem to dress in the field to the way male instructors interact with female students (and an inherent "boys club" that we'll never be allowed to participate in) to the numbers of women in school vs. actually in the work force (where do they go??).

we're actually designing a slow food "center" in rome right now for our studio project, and while we haven't spoken about gender issues and cooking, one can only imagine the can of worms waiting to be opened...
November 18, 2008 at 10:14 AM

Anonymous said…
Great post! I think about this exact issue all the time. Especially relating to Merith's comment, "where do they go?".

I currently am working part time and doing domestic things part time. I spent a lot of my time and energy at the beginning of this arrangement creating stress for myself about how I was being perceived. One of my greatest insecurities is being seen as the "cute housewife," which I am not. Yes, I do work around the house. Yes, I am cute. However, that is hardly a summation of me.

As for the what happened? I think there are more obstacles before women than we realize in academia (and other places, obviously your point.). Unless you are in a "girlie" field of study, of course.

Anonymous said…
Interesting. I think I've always held a very feminist point of view, and I guess I never thought too much about cooking as a girlie hobby. I've always had male friends who are just as interested in the topic as I am. But, it is definitely stereotypically believed that women do the house work and that includes cooking. In my house, I cook and am obsessed with it, but the dish washing is Kurt's domain. However, at my friends' house, the kitchen roles are switched. Maybe some day we'll all get past sexist and homophobic ways of thinking.
November 18, 2008 at 10:39 PM

Anonymous said…
when I see a man cooking, I guess I make the assumption that he is very interested in life: books, travel, film, talking/discussing. There are many men involved in the wine industry: tasting, collecting, vineyards, biochemistry... Nowadays I think cooking is more a unisex activity. My husband and I do divide the chores: my cooking and washing dishes with his cleaning up the counters and kitchen area..but you find what works. The cooking interest seems to have expanded maybe because of the input of both sexes.
November 19, 2008 at 7:17 AM

Merith, the same thing is true in art history. Almost all of my professors are male, while all of my classmates are female. This may also be a generational phenomena, but there's definitely more to it than that. I'm thinking about your project and am trying to come up with something for you, so I'll let you know!

Micha, there are definitely more obstacles for women academics (even in art history!) and it amazes me that the very fields that develop structural methods for analyzing society still play into those same oppressive structures!

Lisa, let's hope that one day we do, but I'm afraid there's a lot of work to be done before that happens!

Anonymous, you might assume that a man who cooks is interested in life, but I'm not sure that same assumption is generally held if a woman cooks. That's my point. For a man, it's a choice, and for women, domesticity is a given.
November 20, 2008 at 2:05 AM