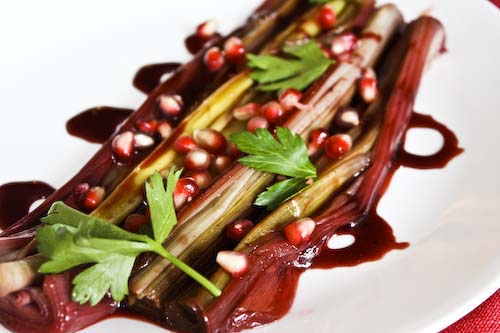 I have a huge seminar paper due next week, so the theme for the next few days is going to be quick and easy, mostly with ingredients I already have on hand.  After that amazingly delicious Cauliflower and Mushroom Potpie with the Black Olive Crust, I had a bunch of leeks left over, since you never seem to be able to buy just one at a time.  Not that I'm complaining, because I really really love leeks.  Rather than look for a fancy, involved recipe in which to use them, I decided to let them star in their own dish for once. 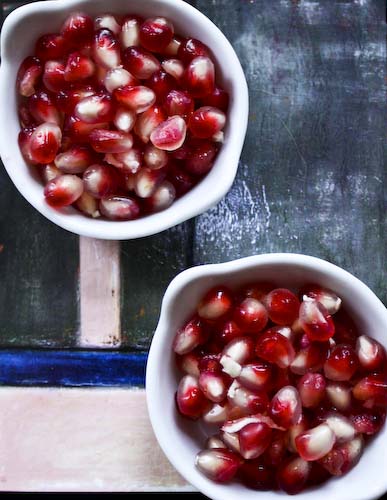 To Mark Bittman's How to Cook Everything Vegetarian I went, hoping to discover the basics of braising leeks.  Of course, braising is pretty simple, so it wasn't the technique I was after so much as some flavor combination ideas.  Bittman suggests braising in oil or butter for a simple, classic preparation, or with vinaigrette, tomato, olives or even mustard.  It all sounded pretty good.  But while I was rooting around in my fridge, I discovered that instead of the vegetable stock called for, I had pomegranate juice.  And instead of mustard, I had pomegranate molasses.  And in addition to parsley for garnish, I still have some pomegranate seeds hanging around.  I know it's not a classic combination, but I figured what the hay.  So I give you Pomegranate Braised Leeks. 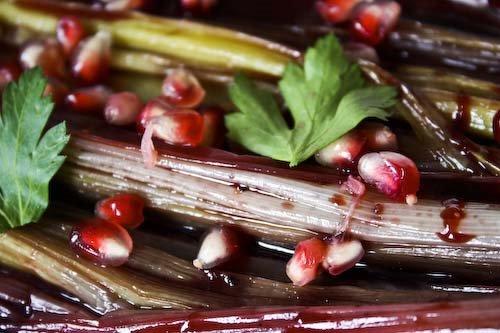 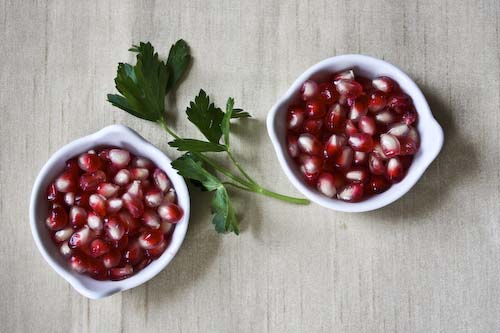 Heat the oil in a skillet large enough to fit the leeks in a single layer.  Once hot, add the leeks and sprinkle with salt and pepper.  Cook them, turning once or twice, until they are starting to brown.  This should take about 5 minutes.
In a separate bowl, whisk the pomegranate juice and the pomegranate molasses together, then add to the skillet and bring to a boil.  Turn the heat down to low, cover and cook until the leeks are tender, about 20 minutes.
Remove the leeks and transfer to a plate.  With the pan uncovered, increase the heat to high and bring to a steady boil.  Decrease the heat so the liquid continues to boil at a steady speed.  Allow the liquid to reduce by about half until it begins to thicken into a syrup.  When a spoon dipped into the liquid remains coated, you're done.  This should take just between 10 and 15 minutes.
Sprinkle 1 tablespoon of lemon juice over the leeks, taste and adjust the seasoning.  Garnish with chopped parsley and pomegranate seeds and a drizzle of syrup. 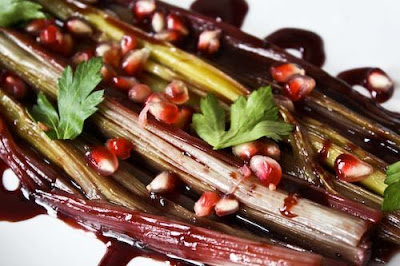 I'm sending this in to Culinarty for the monthly Original Recipe Round-up!

jenniferhoiyin said…
i agree, simply amazing. I have pomegranates, but no leek. i do have a new shopper bag, so I'm off to the market tomorrow morning :) where do you get pomegranate molasses, sounds very yummy.

This is my first time here. U have a lovely space!

Yoli said…
Oh my. That looks delicious and it is so well photographed. You just want to know how to cook to make it! Lovely blog.
November 8, 2008 at 8:01 AM

Deborah said…
I'm always for quick and easy! This looks totally different from something I'd normally eat, so I'd love to try it!
November 8, 2008 at 4:11 PM

Anonymous said…
Braised leeks are so delicious, but braised leek with pomegranate? That sounds delicious and interesting. What did you serve it with?
November 8, 2008 at 7:04 PM

Anonymous said…
i love this dish!! it's so elegant. this would be so expensive if it was served in a restaurant.

Andrea said…
Esi and Yoli, thanks for the lovely comments!

Jen, I found my pom molasses at Gourmet Garage, which is a kind of specialty store here in NYC. You might try a middle eastern market or even look on the internet.

Vij, thanks for the luck! I feel like I'm going to need it for this one!

Miss Marie, couldn't agree more. I try to use them as much as I can while they're around.

Deborah and Joanna, it was definitely different, and actually I cut down on the amount of pom molasses that I posted to the recipe. It's a strong sweet/sour flavor!

Hanne (one of my most loved friends is named Hanne with an "e". She's Norwegian!) would you believe that I didn't serve it with anything? I'm a bit pressed for time lately, so I just sat down with a fork and ate it. The joys of cooking for yourself!
November 9, 2008 at 4:34 AM

Maia said…
Heavenly! I don't know many people who love leeks, but I do...I think it's my mother's French family who instilled that particular taste.
Your photo layouts are beautiful.
November 9, 2008 at 6:49 PM

veggie belly said…
This is a beautiful dish. Ive never cooked with pomegranates - just ate the fruit and drank the juice :) Its great that the leeks are the star here! In most dishes they are usually in the background somewhere!
November 10, 2008 at 1:25 AM

Anonymous said…
Such an unusual recipe... Looks delicious, Andrea. Wouldn't have thought this recipe was inspired by bittman the minimalist.
November 11, 2008 at 5:16 AM

Lore said…
W-O-W this is truly unique Andrea! Love that you followed your own hunch instead of the recipe :).
Thanks for sharing it with the Original Recipes Round-Up and good luck on your paper!
November 11, 2008 at 8:27 AM