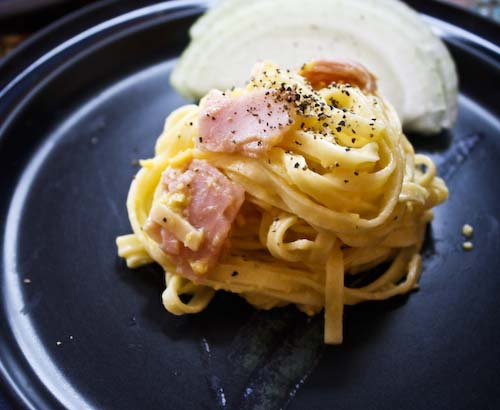 R has been requesting spaghetti alla carbonara for months now.  Literally, months.  For some reason, I had always assumed that carbonara, as well as  ham, necessitated a decadent cream sauce with cups of the heavy kind.  So I've been delaying.  Evidently I didn't have quite the correct assumption.  Come to find out, there isn't an ounce of cream in the old world recipe.
This is a classic recipe, it seems, and Elisabeth Luard, in her fabulous The Old World Kitchen says it's "charcoal-burner's pasta" because charcoal burners, used to roughing it in the woods for weeks at a time, could easily carry all of the ingredients in a satchel.  The original Italian camping food?  Perhaps.  Certainly it's much better than the freeze-dried food I've always had, but I'd be incredulous about trying to carry around those eggs, at least now a days.  I suppose salmonella wasn't such an issue when charcoal burners roamed the countryside.  If you're worried about it now, use fresh eggs from a source you trust.  They do undergo a little second-hand cooking, but not much.
The traditional carbonara is a wonderful example of the basic tenants of peasant cooking: few ingredients, well prepared, allowed to shine on their own.  It doesn't hurt either that the recipe takes mere moments, requiring only a few flicks of the wrist. 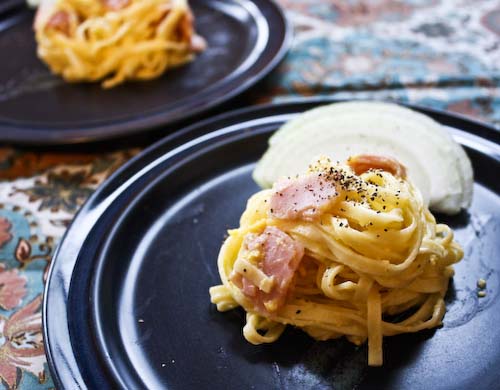 Spaghetti alla Carbonara: Spaghetti with Ham and Eggs
2 garlic cloves, peeled and crushed
4 tablespoons olive oil
Zest from one small-ish lemon
4 ounces Parma ham, pancetta, or any dried ham
1 egg + 2 egg yolks
S/P
1 lb. spaghetti
Fill your spaghetti-cooking pot with water and bring to a boil.  In the meantime, in a small skillet, sweat your garlic in the oil over very low heat.  The idea is to infuse the oil with the garlic.  The peasant recipe suggests setting the garlic in the oil near the fire, so do that if you have one!
Chop the ham. In your serving bowl, beat the egg with the 2 egg yolks and add in some salt and pepper.  Set aside.
Once the water boils, cook your pasta and when it's done, drain it well.  Immediately add the pasta to the egg mixture.  Turn the pasta to coat it with the eggs, which will cook a bit through contact with the hot pasta.  Add in the ham, the zest and some more salt and pepper to taste and pour the garlic over the pasta before giving it a few more turns. Serve with some parmesan cheese.
I served mine with a few thin slices of sweet vadalia onion.
Email Post
Labels: Elisabeth Luard The Old World Kitchen

Anonymous said…
Delicious! My reason for never making this dish is avoidance of the ham. I don't think turkey bacon would do it justice, so I might just have to make it properly and pick out the ham on my plate.
November 13, 2008 at 8:20 PM

Anonymous said…
Really? It's that easy? I've been avoiding this dish for a while because I always assumed it was more complicated.
I never trust my eggs for more than a day on the trail :)
November 13, 2008 at 9:50 PM

Anonymous said…
I have been craving this all week...how did you know? Yours looks so good. I always think of it being decadently evil too. You might have talked me into indulging now. Yum!
November 14, 2008 at 4:44 PM

Andrea said…
Lisa, I don't think you even need to add the ham in. The best part is the egg-coated noodles, so just leave the ham out if you don't want it! It will still be flavorful.

Micha, yup, that easy! I don't think I've ever actually brought eggs with me backpacking. Usually it's peanut butter and bread!

Kevin, I couldn't agree more. It needs very little to be lovely.

dirigible said…
Did I miss where the garlic oil comes back in? Just pour over the top of the pasta, perhaps?
November 15, 2008 at 2:43 AM

Andrea said…
Oops, thanks for the catch Kane! Yes, just pour the garlic oil over the pasta along with the ham etc. I've corrected the recipe as well.
November 15, 2008 at 2:46 AM