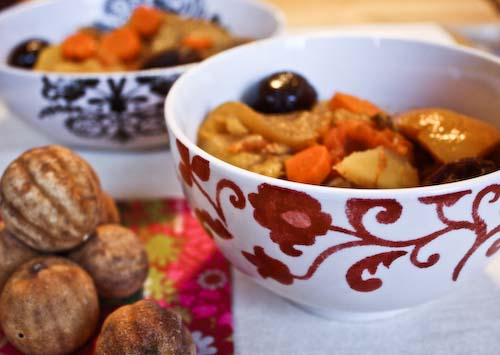 Sometimes, grocery shopping in New York can be a real chore.  At first, I hated it.  Sacrilege, I know, but before you throw something, hear my out.  In New York, before you get a feel for what's out there, one-stop shopping can be virtually nonexistent.  "You have bread flour but not yeast? Okay, I'll go somewhere else.  But I'd better haul that bread flour with me, because there's no guarantee they'll have it at the next store..."  Going to three different places to find a grapefruit is par for the course.  And although this doesn't sound like a big deal, I don't have a car here in the city.  So there's no throwing groceries in the back seat and stopping off at the next place.  No, I have to walk.  And carry.  And carry on the subway.  Sometimes I even work up a sweat, which I do NOT admit to lightly. 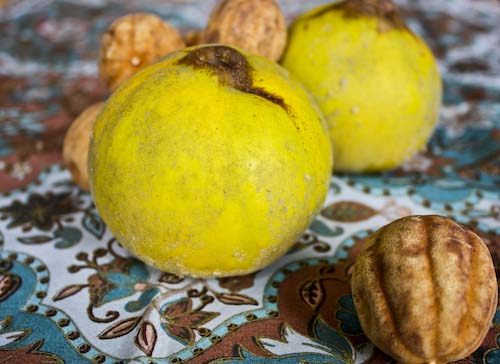 But after a few years (yes years) of keeping mental notes whenever I went shopping as to where I could get what, I have a pretty good feel for the layout.  And now I revel in everything I have access to in "The City."  I've been collecting ingredients for this particular recipe for about a week and a half.  The quince from the farmers market, the limou-omani and the advieh from Tashjian Karnig in Murray Hill and the veal cubes from Gourmet Garage on the Upper, Upper East Side.  Normally I make do with substitutions if something alludes me, but for some reason I made up my mind to really follow this recipe.  Okay, not true.  The recipe originally called for lamb, but made an allowance for veal.  I don't care, I checked, and I've made no mental notes for lamb.  (By the way, isn't it strange when people fact-check themselves when writing instead of just deleting the lie and starting over with the truth?)
In this case, shopping was something like a scavenger hunt, and one of the best things to come out of this recipe, other than a great big pot of deliciousness, was definitely Tashjian Karnig (Lex between 28th and 29th for those of you in NYC).  It is a revelation and my new favorite place.  Sometimes heading into an ethnic market can be intimidating, and in New York it's like stepping into another world, usually complete with a foreign language, and if you're paranoid, people wondering what that incompetent white girl is doing bumbling around in here.  But I was too overwhelmed to be shy and just walked in circles around, and around the teeny store overflowing with all things Middle Eastern.  Besides, since I had specific things to look for, it was very easy to appear occupied. 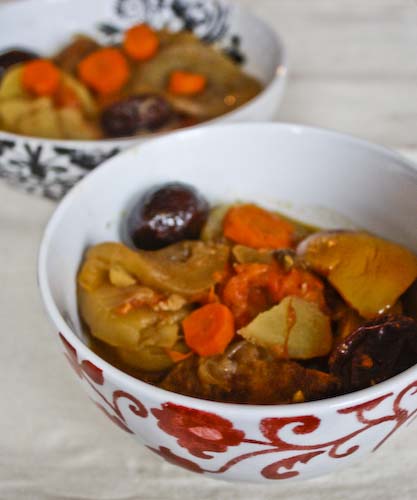 As far as these ingredients go, limou-omani are dried Persian limes, and look like fluted, walnut-sized orbs.  The recipe calls for 1 teaspoon of the ground powder, but since all I could find were the actual dried fruits, I ground them myself in my handy little mini-food processor.  If you can't find any, I'd just substitute some fresh lime juice to taste.  You'll be replacing the deep flavor of the dried limes with a brighter twist, but it will still be good.  Advieh is a kind of Iranian all-purpose seasoning, based on cinnamon, cardamom, turmeric and dried rose petals (!!), among other things. (I'd tell you what those other things are, if I knew.  I think you have to be initiated for that, though.) 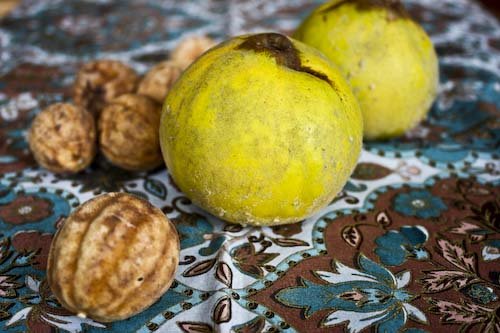 The recipe comes from Najmieh Batmanglij's Food of Life (the older version, there's also an expanded New Food of Life out that gets excellent reviews, but this is the version I have).  I made a few adjustments to the original recipe, and my version is what you find bellow.  Nothing major, and it still turned out, well, wonderful!
When skimming the recipe, if you notice the prunes and think "ewww" please please please reconsider and don't leave them out.  The slow stew turns them into delectable and deeply flavored little balloons of goodness that burst on the tongue.  If calling them "dried plums" helps, do that.  Also, I drained my eggplant before adding it, although the recipe doesn't call for this step and thinking back now, it's probably extraneous since they're being cooked for so long with so many other things.  And if you can't find quinces, replace them with apples.  You don't need to peel the quince, but be sure to wash them, especially if they're charmingly fuzzy.
Veal Stew
3 large onions, sliced
1.5 pounds veal, sliced into stewing cubes
2 garlic cloves, passed through a press
2 small quinces, cored (peeling not necessary)
1 small eggplant, peeled and sliced
2 carrots, peeled and sliced
3 tomatoes, sliced (peeling not really necessary)
2 large potatoes, peeled and, sliced
4 tablespoons oil
1 cup pitted prunes
1 teaspoon advieh
1/4 teaspoon turmeric
2 teaspoons salt
1/4 teaspoon pepper
1 tablespoon tomato paste dissolved in 2 tablespoons hot water
1/4 teaspoon saffron, ground and dissolved in 1 tablespoon hot water
1 tablespoon powdered limou-omani
Pour 2 tablespoons oil into a large, heavy Dutch oven.  Layer the first 8 ingredients in the pot in the order they're listed.  Top with the prunes, then pour in the remaining oil.  Sprinkle the advieh on top, as well as the turmeric, salt, pepper, dissolved tomato paste, saffron and limou-omani.  Cover and cook for 2 hours on low heat.  After 2 hours, remove the lid and mix the contents around a little.  The veggies will have released their juices forming a succulent broth.  Bring the broth to a gentle simmer, re-cover and continue to cook until done, around another 1.5 hours.  Serve and enjoy!
Email Post
Labels: Food of Life Najmieh Batmanglij

Snooky doodle said…
wow what a nice dish. And the flavour combination is amazing. I like prunes especially with pork :)
November 17, 2008 at 5:32 PM

Dana Treat said…
You are lucky that you have access to all kinds of ingredients, even if you have to run all over the city to find them! When we lived in London I would take Tubes and buses to find certain things and I loved it!
November 17, 2008 at 7:18 PM

Andrea said…
Snooky Doodle, I love prunes! My fiance picked all of them out and wouldn't try any, but that just meant more for me!

Dana, I know, I really am lucky even if I complain. Thanks for humoring me!