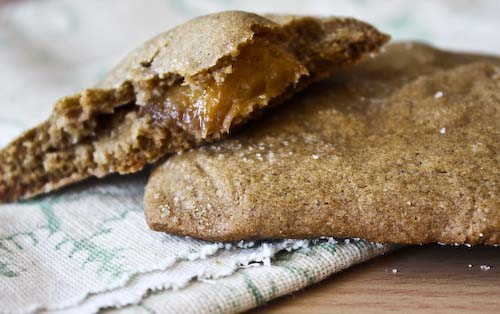 You could, if you wanted, simply call these peach filled ginger cookies.  But then you'd be missing the point.  Because while they're delicious at room temperature, their true personality emerges only when warm.  And after baking, one way to warm them is in your toaster oven.  That way, you're not bound to consuming the entire batch moments after they're done.  That would be a challenge for even the most ravenous.
Which is not to say that they're not addicting.  And in fact, if you chose to impulsively throw caution out the window, and if you had a little help, I'm fairly certain they wouldn't last to the next day.  For an idea of what actually happened when I made them, just replace "you" with "I" in the above scenario.  Although I'll never admit it.
When I was young and eating pop tarts, I used to nibble around the entire periphery being careful not to get any jam until I was done.  Once the edges were off, it was time to sink my teach into the frosted filling, which would be gone in a matter of bites.  In this case, the crust is not a dry, tasteless vehicle for hot jam and frosting, but a heady mixture of spices that envelops a filling of peaches cooked in browned butter, their juices becoming a sort of sauce.  Heaven. 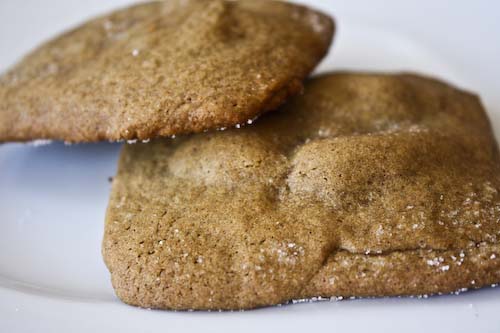 Gingersnap Toaster-Oven Tarts with Peach Filling
From Sherry Yard's Desserts by the Yard
For the Gingersnap Dough
2 cups all purpose flour, plus more for dusting
1 teaspoon baking soda
4 ounces (I stick) unsalted butter, cold and cut into 1/2" pieces
2 tablespoons sugar
1/2 cup packed light brown sugar
1/4 teaspoon salt
1 tablespoon ground ginger
1 1/2 teaspoons ground cinnamon
1/2 teaspoon ground allspice
1/8 teaspoon ground cloves
1 large egg, at room temperature
3 tablespoons molasses
Sift together the flour and baking soda and set aside.
With a stand mixer fitted with a paddle attachment, cream the butter on medium speed for about 2 minutes, until it's bright yellow.  In a separate bowl, mix together the sugars, slat and spices, then add the mixture to the butter.  Scrape the sides of the bowl down, then continue to cream the mixture on medium speed for about another minute.  The mixture should be smooth and free of lumps.
With the mixer off, add the egg and molasses, then mix on medium for another minute until everything is incorporated.  On low speed, add the sifted flour and beat on low until everything is incorporated.  Scrape down the sides of the bowl.
Press the dough into a 1" rectangle, wrap in plastic wrap and chill in the freezer for 30 minutes, or in the refrigerator for 2 hours (you can keep it at this point wrapped in the fridge for 3 days, or in the freezer for 1 month).
Roll out the dough between two sheets of parchment paper to a 12" square.  Dust with flour if it sticks, and place the dough, which should still be between the paper, into the freezer for 30 minutes.
For the Filling
2 tablespoons butter
package of frozen peaches, thawed and drained, or 3 fresh peaches
3 tablespoons sugar
1/8 teaspoon ground cinnamon
Heat a large, heavy skillet over high heat and melt the butter.  It should turn light brown after about 5 minutes.  Add the peach slices in a single layer and cook for about 2 minutes, then sprinkle with the sugar and cinnamon.  Continue to cook, stirring, for about 5 more minutes, until the peaches are tender (I used frozen, fresh peaches may take a bit less time).  Take the pan off the heat and allow to cool.  Chop the peaches into small pieces.
Preheat the oven to 350, with a rack in the middle.  Line two baking sheets with parchment paper.
Putting it Together
Take the dough out of the refrigerator, and flour both sides of the dough.  On a floured surface, cut the dough into 16 3" squares and place a blob of filling in the center of 8 of them.  It's easiest to transfer the first 8 squares to the baking sheets as you cut them.  Cover the first 8 squares with the last 8.  Pinch the edges together so that the squares look like ravioli and sprinkle sugar generously over the top.  Bake for 12 to 18 minutes, the dough should be crisp and fragrant.  Serve warm.
Email Post
Labels: Desserts By the Yard Sherry Yard

Dewi said…
Andrea, this is such an unusual well, I was going to say cookies..., but tart is more appropriate like you've said. I understand it why it taste better when it is warm, that peach filling will melt in your mouth, right?
Cheers,
Elra
January 27, 2009 at 5:39 PM

Hayley said…
I'm sitting in my dorm room, drooling over your delicious recipes. I can't wait to go home and cook! Thanks Andrea!
January 27, 2009 at 6:45 PM

Anonymous said…
I always eat the outside bits of things too - so I can savor the best parts for last.
I love warm cookies - if I can't get them right out of the oven I pop in the microwave for ten seconds.
Warm gingersnap + peach - yum!
January 27, 2009 at 11:29 PM

Anonymous said…
So since you referenced pop tarts, that means I can eat these for breakfast, right?? :) They look AMAZING! I can't wait to make them.
January 28, 2009 at 3:12 AM

veggie belly said…
Oh my, this looks incredible! I will eat anything with ginger and molasses in it! The toaster is a brilliant idea.
January 29, 2009 at 1:22 AM

Andrea said…
Thanks for all the wonderful comments, guys! I'm behind on my responses, and trying to catch up. I'll be better in the future!

Elra, it is unusual and best warm, you're so right!

gk, Pop Tarts are for chumps! Couldn't have said it better!

Veggie Belly, totally, I can't believe how many bottles of molasses I actually go through. It's crazy!
February 7, 2009 at 3:53 AM