How to Cut Up a Chicken

There are a few culinary miracles I feel I should be able to accomplish.  Baking bread, making a pie crust from scratch, putting up my own preserves, and cutting up a whole chicken, for example.  Although not technically miracles, I suppose, these are some of the feats that might send shutters down the novice cook's spine (like me, for instance).  There seems to be a dividing line between those who can, and those who wish they could.  Yet, I've found, when faced head-on, these obstacles often become close friends.  Such is the case with cutting up a whole chicken.  Time was when I flipped past a recipe that dared suggest such a process because the process itself never seemed to be delineated.  But in this time of economic hardship, a whole chicken ends up  being the frugal way to go.  And an opportunity to broaden your arsenal, if you like to think of cooking as a war.  Which sometimes, it is.
To Cut up a Chicken
Although cutting up a chicken can be done with nothing more than your chef's knife, I find kitchen sheers to be an even easier way to go, especially if your knife is a little dull from all the holiday cooking.  Below, I use both. 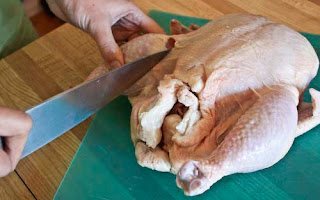 1.  Slit the skin at the chicken's hip joint so that you can remove the thigh. 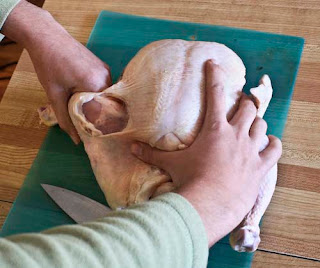 2.  With your hands, bend the thigh back until the bone pops out of the joint and is exposed. 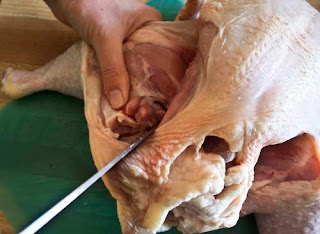 3.  Cut along the broken joint in order to remove the thigh from the body.  Repeat on the other side. 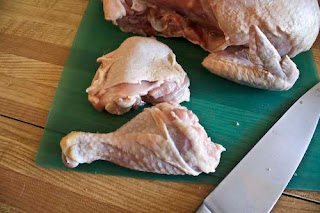 4.  Using steps 1 - 3, separate the thigh from the drumstick by slitting the skin, breaking the joint and cutting it away. 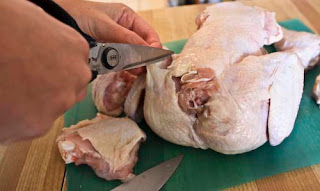 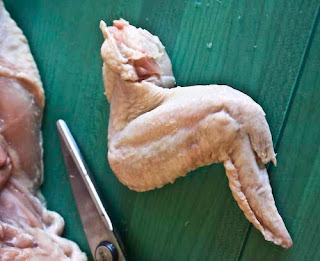 5.  Repeat the same steps with the wing: slit the skin, break the joint and cut it away from the body.  Repeat with the other wing. 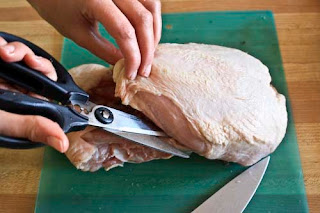 6.  Using kitchen sheers (or a sharp knife) cut around the breast in order to remove it from the back (see picture). 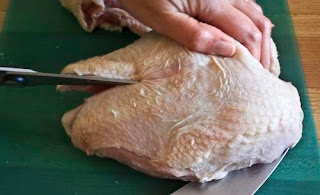 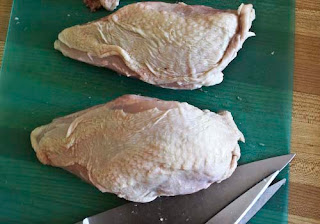 7.  Divide the breast in half into 2 lengthwise pieces by cutting down the middle with your kitchen sheers. 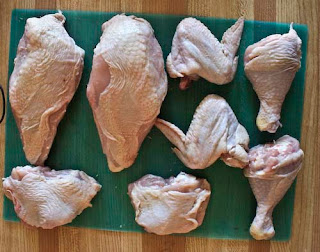 8.  Admire your handiwork.
Need to figure out what to do with your chicken once it's cut up?  Try this:
St. Tropez Chicken
Email Post
Labels: How To's

Esi said…
Thanks for the step-by-step pictures. This is something I have done exactly one time and it took me three days to psych myself up to do it!
January 23, 2009 at 7:40 PM

Snooky doodle said…
I love Nigella and this recipe looks so good. Chicken is one of my mostly cooked dishes. I ll try it. Thankd for posting about how to cut a chicken I ve never done it so far :)
January 23, 2009 at 11:02 PM

Anonymous said…
Although I'm not ready to tackle this task yet, I've bookmarked this post for when (if) I ever decide to be this brave. Your pictures and instructions are very clear! Thanks for posting.
January 24, 2009 at 5:57 PM

Anonymous said…
If you've never had the pleasure/experience of a NYC Chinatown restaurant, you will notice that the manner a cook manages to cut-up a whole chicken, is a diametric departure from this elegant and perhaps retentive style you've demonstated.

One cleaver and five forceful hacks!

Andrea said…
Esi, I know what you mean. I'm a bit uncomfortable,too. But it's getting easier.

Bensbaby, glad you think so. It's really not that hard and you get some bones for a stock left over,too!

JerryNJ, great comment! I've seen them work their cleaver magic in China Town, but I'm pretty sure I'd be one finger shorter if I tried the same thing!
January 26, 2009 at 5:36 PM