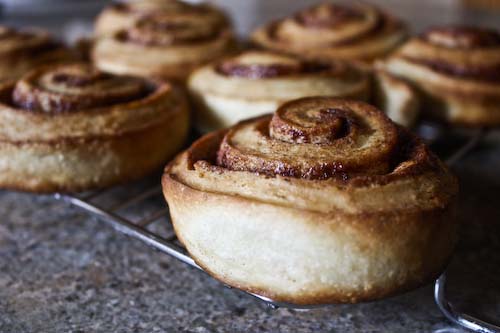 There are ways to make cinnamon buns very time-consuming and complicated. And perhaps if it weren't the day after New Years and we weren't all tired of time-consuming and complicated, such an endeavor would be well worth it. We could make a croissant dough with layers and layers of butter, a process that requires rolling and folding and chilling done three times. We could start the night before and finish in the morning and we would be rewarded with something sinful.
Or, if it were a normal weekend morning, with chores that needed to be done and errands that needed to be run, we could buy our cinnamon rolls pre-made, or cut them from a package, which is almost the same thing. But it's the day after New Years and we don't have much to do. This is a lovely compromise. 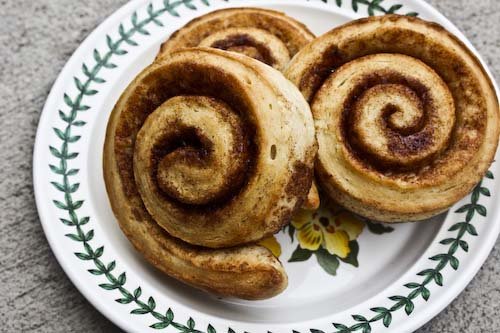 Especially if your finace decides he wants to take this particular project on himself, as mine did. The dough for these Cardamom-Cinnamon Buns is forgiving. It's relatively painless if you're planning on lounging all morning anyway and waiting for a few quick rises is no big deal. The recipe comes from this website, but R has translated and converted it for us below. These rolls aren't overly sweet, but if you have a craving that needs to be satisfied, feel free to slather them with some vanilla icing (my father's preference). We made do with a little butter melting on top.
Norwegian Cardamom-Cinnamon Rolls

For the Dough
4 1/4 cups flour
1 teaspoon cardamom
1/2 cup sugar
1 package active dry yeast
3 1/2 decilitiers milk
1 stick of butter
For the Filling
4 tablespoons sugar
1 tablespoon cinnamon
1 stick of butter
Oven preheated to 425, two cookie sheets greased or lined with partchment paper
Mix the flour, cardamom, sugar and yeast together. Melt the butter and heat the milk until it is just warm to the touch. Mix the butter and the milk into the dry ingredients. Kneed by hand until the dough forms a ball. Cover the dough and allow it to rise for about 1 hour.
In the meantime, allow the butter for the filling to softened and work the sugar and cinnamon into the butter to form a paste. 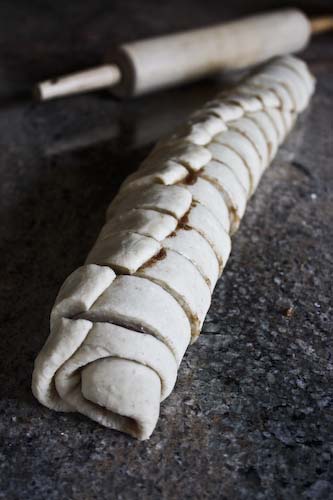 Once the dough has risen, roll it out on a lightly floured surface to about 1/2" thick rectangle. Spread the filling mixture evenly over the dough and roll it up jellyroll style. Using a serrated knife, cut the dough into slices and space the slices out on the cookie sheets. We baked the cookie sheets one at a time for around 14 minutes each, plan to start checking at about 12 minutes. 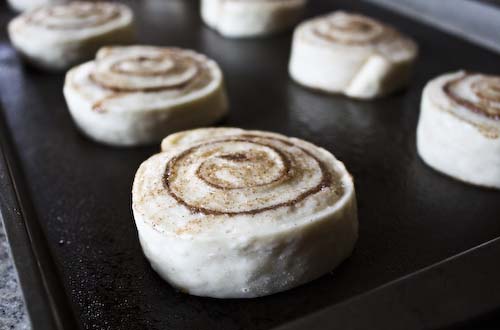 Remove the rolls from the cookie sheets and transfer to a wrack to cool. Be sure to dig into a couple of them while they're still warm, just as they are or with a smearing of butter on top.
* * *
Let's not forget, since these are yeasted they're headed over to Yeaspotting, Susan's weekly breadfest at Wild Yeast!
Email Post

Anonymous said…
The photos are absolutely gorgeous and the rolls look mouth-watering! I can't wait to try the recipe!
January 2, 2009 at 8:11 PM

Anonymous said…
These rolls look incredible! I love the photo of the dough rolled into a snake, and neatly sliced. Great Post!
January 3, 2009 at 1:17 AM

CookinG said…
I just invested in a jar of cardamom! Love this idea...will try it tomorrow. Found you on my new favorite site FoodGawker!
January 3, 2009 at 2:46 AM

Anonymous said…
They look fantastic! I bet they smelled unbelievably good, and the fact that they aren't overly sweet makes them even better!
January 3, 2009 at 3:58 AM

Snooky doodle said…
Great!! love these! I m a great cinnamon fan and the addition of cardamom makes them even more interesting. :)
January 3, 2009 at 7:59 AM

Angela said…
Thank god -- a cinnamon roll that is not a gooey mess. I love sweet things but can't handle overly sweet and most cinnamon rolls go way past my comfort zone. These look terrific! I love the addition of cardamom -- my favorite spice.
January 3, 2009 at 1:31 PM

Ingrid_3Bs said…
Lucky you, your Honey baked these up! They look wonderful, the right amount of "filling' to dough. I've yet to make or try cardamom. I think I'm gonna cave and order a bottle.

Anonymous said…
Which is better, a delicious cinnamon roll warm from the oven, or a fiance who bakes them for you? Lucky woman!
January 4, 2009 at 2:28 AM

Andrea said…
Thanks Marguerite! It's an easy recipe, so that's a plus!

Hayley, thank you! It's so much easier taking pictures in a normal sized kitchen (my mother's) than in my tiny apartment!

CookingG, don't you just love cardamom?! My bottle was a great investment, definitely. Let me know how it goes if you give it a spin!

Jackie and Angela, I definitely liked the fact that they weren't the cloying Cinnabon type rolls. Much better!

Snooky, I love cinnamon and cardamom together! I just love cardamom.

Ingrid, if you get some cardamom, you can use it in Indian and Scandinavian food. Isn't it funny which spices end up in which cuisines?