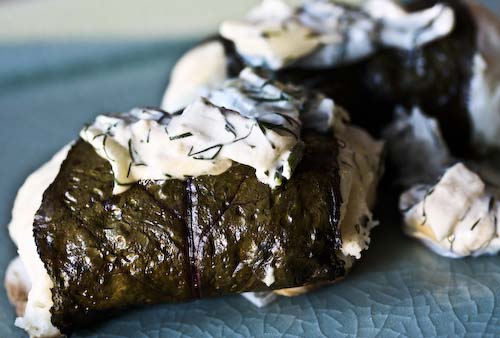 This month, with this recipe, I have had my horizons sufficiently broadened.  While we're used to the concept of bread as a main ingredient in such dishes as egg-soaked pain perdu, tomato-soaked panzanella, and fruit-soaked summer pudding, in the Ukrainian dish holopchi, bread isn't soaked at all.  Instead, it's baked in a wrapping of beet greens, which bar the dill-spiked cream sauce, added just before serving, from fully infiltrating the center. 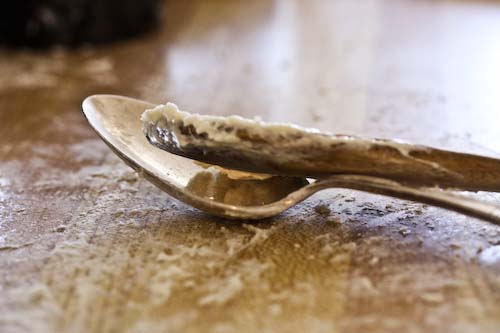 Pure peasant food, defined by using what's left.  If you're wondering where to find beet greens, think the tops of beets, which you can save for another purpose.  And in the absence of meat, a fluffy bread dough expands the packages into little pillows of green and red: beet leaf and vein.  Since R and I don't have any fields or farms to tend, the sauce provided a bit more sustenance than our lives require.  So instead of 2 cups heavy cream, I used light.  And instead of 1/2 cup butter, I coated the pan with about a tablespoon.  The dill is the real star of the sauce anyway, so don't skimp on the fresh stuff. 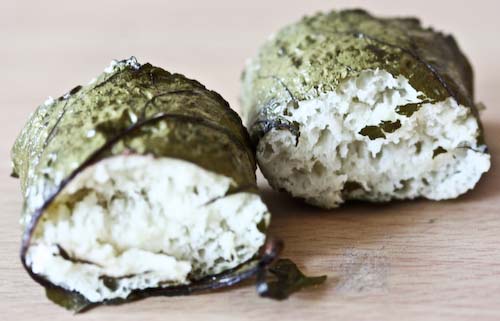 If you think you don't like this kind of thing (and how would you know, really, as I for one have never seen anything like it), be open to the possibility that you're wrong.  It's surprisingly tasty, although not particularly assertive.  But isn't white bread meant to be mellow?  Mellow and nourishing, a so-old-it's-new-again use for the staff of life. 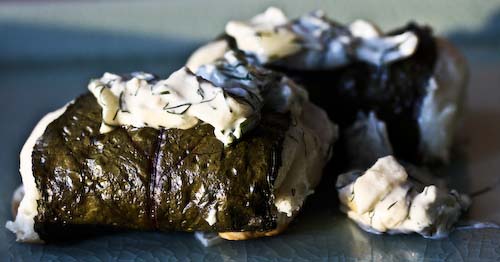 You can find the recipe here.  It makes a huge amount, seriously, huge.  So either plan on feeding the farm or cut it in half.  However, I'd suggest making the full sauce recipe.
Email Post
Labels: Recipes to Rival

Debyi said…
Your Holopchi looks great! I couldn't find beet leaves, beets, swiss chard was pitiful looking, so I used cabbage. The color contrast with the beet leaves makes for a much prettier presentation.
February 2, 2009 at 4:11 AM

PG said…
Great photos! Glad it turned out for you. I think most people were skeptical to begin with but pleasantly surprised. I also like your lightened dill sauce. Good job!
February 2, 2009 at 5:00 AM

Temperance said…
The Dill definitly is the star of the show. It really makes the sauce, but those little pillowsof bread were so tender it is hard not to like this. Yours turned out lovely!
February 2, 2009 at 5:40 AM

Dewi said…
Andrea, this is absolutely sound delicious. Pretty interesting too.
Cheers,
Elra
February 2, 2009 at 6:50 AM

Mari @ Once Upon a Plate said…
Wow, what an interesting recipe Andrea! Thank you for introducing it. :)

I love beets and beet greens, and would like to try to make Holopchi.

Hayley said…
This sounds so interesting. It looks like dolmades, but the flavors are so different. Thanks for sharing!
February 3, 2009 at 3:58 PM

veggie belly said…
Wow, Andrea, this looks so delicious! This is a very unique recipe, never heard of it before. I love the addition of dill. When we visited Latvia, I realized most of eastern europe uses a lot of fresh dill in their cooking..
February 3, 2009 at 7:19 PM

Olga said…
How interesting...My dad grew up in Ukraine, and I've never heard for this dish.

Andrea said…
Debyi, thanks! I love cabbage rolls, so I bet that was a nice (although different) take!

Psychgrad, I wasn't too skeptical...okay I was. But one must be equal opportunity!

Temperance, totally, I actually ended up really liking it!

Sara, dill is so underutilized, isn't it? We should bring it back.

Elra, interesting is right. Thanks!

Mari, I bet you'd like this actually. You're always making very adventurous things.

Madame Chow, what bad luck! I hope you get everything working soon!

Hayley, yes, it's totally different. The rolls themselves don't have a very strong flavor, that's all in the sauce.

Veggie Belly, you're right, it does seem to be an Eastern Euro thing. But I LOVE dill!

Olga, really? I wonder if he has heard of it?

Anonymous said…
Incredible dish. Your entries, pictures and projects are always so inspiring. I just want to run to the kitchen and get to work on something delicious and satisfying.
February 10, 2009 at 10:28 AM