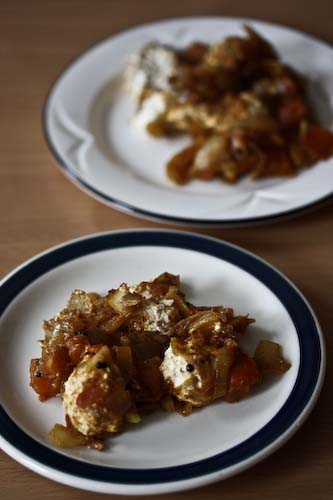 There are some picky eaters around here, and I am not one of them (which leaves only one, since the dog certainly isn't picky).  But if there is one word that will make R stop, mid suspicious complaint about the strange stuff I've piled on his plate, it's "Indian."  As in Indian food.  I can get absolutely anything by him if I use a little fenugreek and cumin.  Handy.
And speaking of fenugreek (also called methi), it's a spice I only recently discovered, but I swear I could burry my nose in a bag of the stuff and just breath deeply all day.  Is that strange?  Perhaps, but to me fenugreek smells almost like caramel at first, before it gives way to a spicy headiness.  In powdered form, it's a beautiful golden color.  Powdered gold.
Traditionally, at least as far as I can tell, achari paneer is a preparation of fresh cheese (the paneer) which is coated in a mixture of spiced tomatoes and onions.  I increased the amount of both tomatoes and onions, and made it into a kind of chunky salsa in which little balls of paneer where heated through.  I also adopted some of the ingredients according to what I had on hand, and what was easy for me to get.  And let me tell you, the sauce was delicious.  The smell was almost as good.  Since then, I've been obsessively trying to figure out what else I might douse in my new favorite condiment, after I double or triple the recipe below. 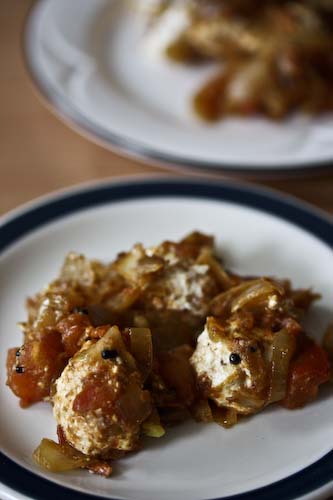 So to Indian food purists, I'm sorry.  This is not real achari paneer.  For those who love Indian flavors, I think you'll enjoy this mixture of masala spices, tomato and onion.  It's single pan cooking, done in a matter of minutes, and with a few spices, is easy to produce in an American kitchen.  Enjoy.
Achari Paneer
Quite a bit adopted from Good Tempered Food by Tamasin Day-Lewis
Sunflower oil for the pan
2 pinches of mustard seeds
1/2 teaspoon of ground fenugreek
1/2 teaspoon of ground cumin
1 small onion, chopped
1 small tomato, chopped
1/2 teaspoon chili powder
1 teaspoon ground coriander
1 cup paneer, rolled into little bite-sized balls between the palms of your hands.
salt
sugar
lemon juice
cilantro
Heat the oil in a pan over medium to medium-low heat.  Once the oil is hot and shimmering, add the mustard seeds and allow them to pop.  This will only take a moment, and once they're done, add the onion, fenugreek and cumin.  Cook until the onion is brown, then add the tomato.  Cook down for about 10 minutes.
Add the chili powder and coriander and continue cooking for a couple of more minutes.  Drop in the balls of paneer, making sure they are coated with the mixture.  Add salt, a pinch of sugar and a little lemon juice to taste.
Top with some fresh, chopped cilantro and serve.
Notes:
* For the paneer, you can also use a good cottage cheese that's been drained of excess moisture.  To do this, fold a piece of cheese cloth over a bowl and put the cheese in the cloth.  Either hand the cheese wrapped in the cloth over the sink, or  put it over a sieve propped in a bowl.
*  Or you can make your own paneer by following the recipe here.
Email Post
Labels: Good Tempered Food Tamasin Day-Lewis

Dewi said…
It doesn't matter wether it is authentic or not, important thing is taste delicious, right?
Cheers,
elra
March 10, 2009 at 5:22 AM

veggie belly said…
I love fenugreek - both the seeds and the greens. I always have fresh roasted, ground fenugreek seeds on hand. You are so right - it smells incredible!
March 10, 2009 at 6:28 AM

Dana Treat said…
I'm with your husband - I can eat Indian food at any time any day. I've always thought fenugreek smells like maple syrup. When I was nursing my second child, I took it in capsule form for a while to increase milk production and I think I smelled like it!
March 10, 2009 at 6:06 PM

Hayley said…
I love Indian flavors, and this post makes me want to hit up my favorite Indian restaurant for dinner tonight!
March 10, 2009 at 9:25 PM

If you like fenugreek and cumin, you will love panch phoron, the Bengali 5 spice mixture made of equal quantities of cumin, fenugreek, fennel, nigella and black mustard (all seeds). I have a fantastic dal recipe for it on my blog (Bengali red dal). Your Indian-food loving man will adore it.
March 10, 2009 at 11:48 PM

Anonymous said…
I've never really used fenugreek, I'll have to give it a whirl. I adore curried paneer, and usually make my own. But it's best if it drains overnight, and I rarely plan that far in advance. Where do you buy pre-made paneer in NYC?
March 11, 2009 at 5:36 PM

Andrea said…
Maninas, oh I am definitely going to try that! I'll let you know next time I make it down to the Indian market to get all the spices. thanks!

Zested, I actually don't know where to get paneer in New York. I made my own for this recipe, and you're right, it takes some time for draining. But I ended up with such a huge batch! But I do know of some great Indian grocery stores, they're kind of all centered around the high 20's on the East side, at least the ones I know of.
March 12, 2009 at 4:17 AM