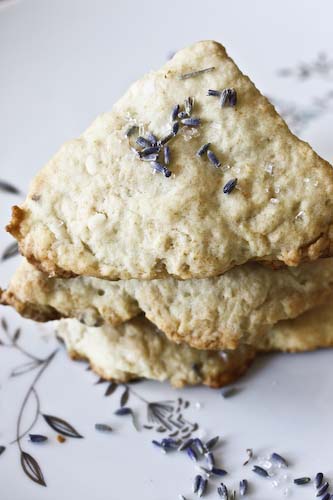 This is one good example of when nice things come out of annoying situations.  I won't go into it too much here, but my landlord is the worst landlord on the planet.  I have a whole list of reasons to dislike him and how he treats his tenants.  Poetic justice has actually been served, however, because he fled from the US recently after being charged with something like 13 counts of fraud or some such nonsense.  So now his adult children run the family business, but you know what they say about where the proverbial apple falls. 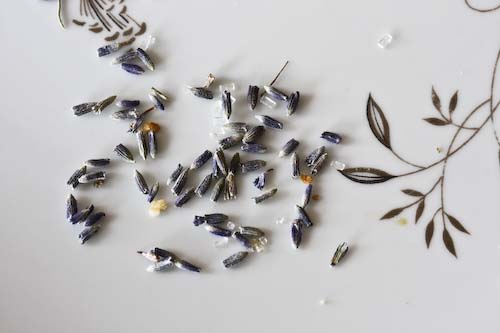 So anyway, we've been through about 3 weeks of haggling to get a new fridge before the one we have officially dies.  And guess what.  Yesterday, it happened.  So now I am without a fridge, although the freezer manages to eak out a few little puffs of cold.  I've salvaged a few things, transferring them from the fridge to the freezer.  My little tub of crème fraîche didn't quite make the cut.  I came up with this recipe to use it up in one shot.
These turned out very well.  Very, very well if I'm forced to say so.  They're not the kind of sugar-bombs one would get at Starkbucks, however.  They're much more subtle, with just a hint of lavender.  Springtime scones, really.  A tang from the crème fraîche, and lavender fresh-cut spring.  Enjoy. 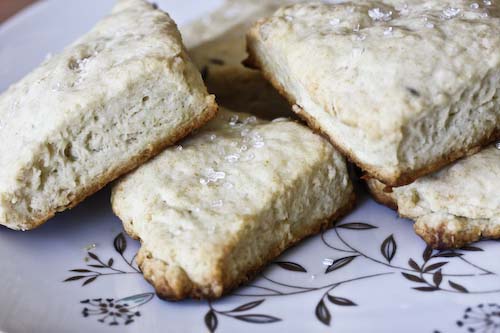 Lavender and Crème Fraîche Scones
2 cups flour
1 cup crème fraîche (8 oz package)
1/4 cup neutral tasting oil, such as sunflower
1 tablespoon sugar
2 1/4 teaspoons baking powder
1/4 teaspoon salt
3/4 teaspoon lavender buds
A few pinches of sparkling sugar
Oven preheated to 425 F, grease a baking sheet.
Combine the flour, sugar, baking powder salt and lavender in a bowl.  Add in the creme fraiche and oil, and mix until it begins to form a dough.  Either turn it out onto a lightly floured surface, or give it a few good kneads right in the bowl until it holds together.
Divide the dough in half, and, on a greased baking sheet, flatten each half out into rounds about 1" thick.  Cut each of the rounds into quarters using a knife, and separate the sections by about 1" on the baking sheet.
Bake on the middle rack for about 15 minutes, until the edges are lightly golden.  As soon as the scones come out of the oven, sprinkle with a little sparkling sugar and serve.
Email Post
Labels: Original recipe

captaintodd said…
This is my favorite post so far! So controlled and with the perfect hint of bitter anger. And it all seems to work so well presented with this subtle little treat. You are some kind of brilliant. :)
March 21, 2009 at 5:21 PM

Hayley said…
Sorry about your awful landlord. I hope you get a fridge soon.

These scones sound wonderful. I'm making some tomorrow for brunch, and I might have to steal some ideas from you. Thanks Andrea!
March 21, 2009 at 6:46 PM

Dana Treat said…
I think Starbucks has forever ruined us in our taste expectations for scones. They aren't supposed to be sugar-y gut bombs, they should be much more subtle. Yours look lovely!

Angela said…
Nice scones, Andrea! Way to go with making the most out of a rough situation and using what you had -- fast. That's the sign of a great cook! These look delicious. I hope it works out with getting a new fridge!
March 21, 2009 at 11:24 PM

The Food Librarian said…
These look delicate and fantastic! Sorry about your yucky landlord!!!
March 22, 2009 at 4:55 AM

Anonymous said…
Those look amazing. I'm totally on a lavender kick right now. And I don't know anything of these overly-sweet Starbucks scones you speak of - the scones I'm used to come from the local coffee shop and are more like hard buttermilk biscuits (usually) with dried fruit in them. I can definitely see how lavender would work in a scone!
March 22, 2009 at 4:53 PM

Esi said…
Sorry about your landlord and refrigerator. Although, it may be worth it for these lovely scones.
March 23, 2009 at 2:18 AM

Janine said…
Heavenly! Have to try this!!

Janine said…
Heavenly! Have to try this!!

Dr Purva Pius said…
Hello Everybody,
My name is Mrs Sharon Sim. I live in Singapore and i am a happy woman today? and i told my self that any lender that rescue my family from our poor situation, i will refer any person that is looking for loan to him, he gave me happiness to me and my family, i was in need of a loan of S$250,000.00 to start my life all over as i am a single mother with 3 kids I met this honest and GOD fearing man loan lender that help me with a loan of S$250,000.00 SG. Dollar, he is a GOD fearing man, if you are in need of loan and you will pay back the loan please contact him tell him that is Mrs Sharon, that refer you to him. contact Dr Purva Pius,via email:(urgentloan22@gmail.com) Thank you.