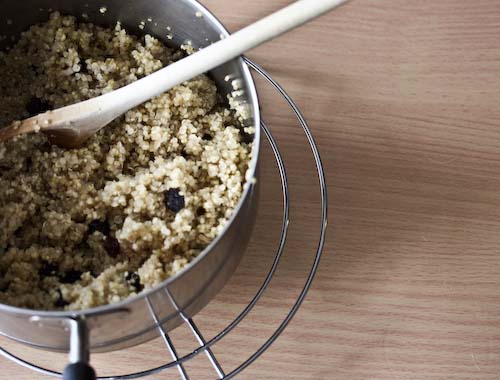 Here's what I like about quinoa.  I love that when it's been cooked, it becomes a collection of translucent little grains with a thin ribbon running through each one.  And I love that it kind of pops between your teeth.  I love how, when prepared like this, you can almost suck the slightly sweet liquid from it, which it is so willing to give up, as you roll the grains around on your tongue.  Obviously I have a perhaps too intimate relationship with quinoa.  But if you're a texture eater, there's almost no better texture in the world.
I've made savory versions before, meant for lunch or after, and baked it into bread.  But for breakfast, quinoa, versatile whole grain that it is, easily usurps oatmeal's throne, at least for one morning.  And if you make a batch you can actually store it with no soggy, ill effect.  I imagine there are innumerable ways to spice this, but since we're not quite out of the woods with winter yet, I went with those old cold morning standbys, ginger and cloves.  Sweetened with a little agave nectar, and if I'm being honest, a dash of maple sugar.  What could possibly be anything but lovely about that? 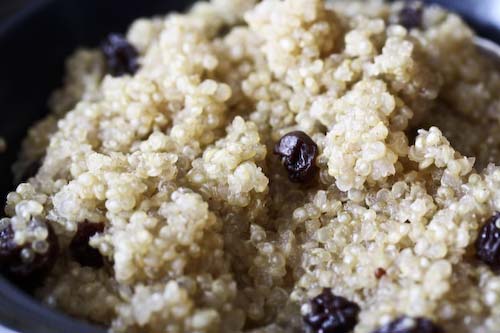 With quinoa for breakfast, you start your day with one of the healthiest, most nutrient dense whole grains out there.  It fills you up long-term (unlike those cereal bars we're all guilty of grabbing sometimes) because it's rich in protein.  And, if you feel as I do, you just cannot beat that wonderful nutty flavor.
Like oatmeal, flavorings and sweeteners should be added to suit your taste, so there's really no recipe.  More like a list of suggestions.  Below, I'll suggest what I did.
Breakfast Quinoa
1 cup quinoa
2 cups water
Cinnamon, to taste
A pinch of ground cloves
1 fun sized package of raisins
Agave nectar, to taste
Maple sugar, to taste (optional, which is a silly thing to say, because it's all optional and easily switched out).
In a saucepan, combine the quinoa and water.  Add the rest of the ingredients and give it a good stir.  Bring to a boil, then turn down to low and cover.  Allow to simmer until the water has been absorbed, about 15 minutes.  Enjoy your day.
Email Post

Coleens Recipes said…
I have just discovered quinoa and I've been looking for recipes to try. Thanks for posting.
March 17, 2009 at 7:24 AM

Anonymous said…
I adore quinoa for breakfast and am happy to see others enjoy it as well!

stephchows said…
I recently fell in love with quinoa. I just posted some amazing breakfast muffins that use them as a base. So tasty! You can check them out here, I bet you'd love them!

Diana said…
I tried a recipe for breakfast quinoa once and quickly went back to my regular oatmeal! I like quinoa in general, but it just didn't work for me for breakfast. Maybe if I added some peanut or almond butter to it...

Andrea said…
Thanks for the comments everyone. Steph, I love the look of those muffins!

Diana, my fiance agrees with you, quinoa in the morning is not his thing. I don't think he likes its nuttiness. But stirring in a nut butter sounds like a great idea!
March 19, 2009 at 12:02 AM

MelissaJane said…
Oh, this is good! For those who find it a little too...quinoa-ish for breakfast, I strongly recommend adding some homemade applesauce to it. Not only does it sweeten it and add a great flavor, it makes it creamier - a little more like oatmeal. Yum!
February 5, 2011 at 10:04 PM

Geraldine said…
I've never eaten quinoa but I just love that first paragraph in your post - what a great description! My mum bought some the other day so I googled Quinoa Breakfast and found your blog. We'll be testing this out and looking forward to some texture for breakfast tomorrow! :-)
February 14, 2011 at 5:04 PM

rubina said…
I came across your blog while looking for recipes with quinoa for breakfast. This is what I ended up eating:
https://treintaomas.wordpress.com/