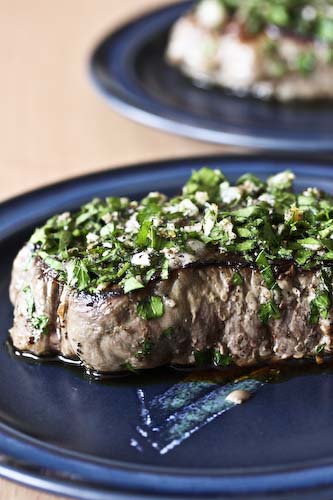 I'm having trouble deciding how I want to write about bone marrow.  It's one of those ingredients that feels so old world, so in keeping with using every part of the animal, that we don't see it much anymore.  After all, the way we consume meat nowadays pretty successfully separates us from the source both technically and intellectually.   You rarely see a cut of meat, save, perhaps, for a roasting chicken, that even remotely resembles the animal from which it came.
But beef marrow has long been prized for its fatty succulence, one of the easiest fats, in fact, for the body to digest.  It has been used in England since at least the Middle Ages.  There, it's eaten as a savory course following dinner and preceding drinks.  Richard Olney, in his Simple French Food asks that it be chopped and added to the filling for Beef and Marjoram Ravioli, a recipe, he claims, of Tartar origin.  During the period of the Industrial Revolution, Queen Victoria was known to spread the steamed stuff thickly on toast, which, one presumes, would then have been sprinkled with parsley and fresh lemon juice. 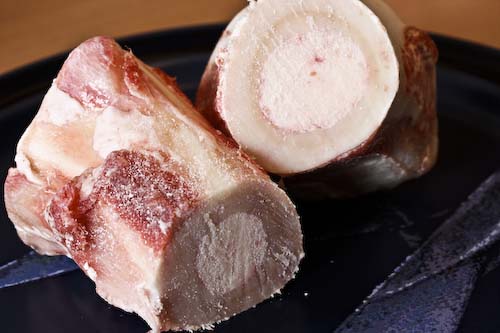 Parsley and lemon, by the way, do seem to have a special affinity to beef marrow, especially when spiked with a little garlic.  And that is how I used it, as a topping for pan seared steaks in a recipe from the Zuni Cafe Cookbook by Judy Rodgers. 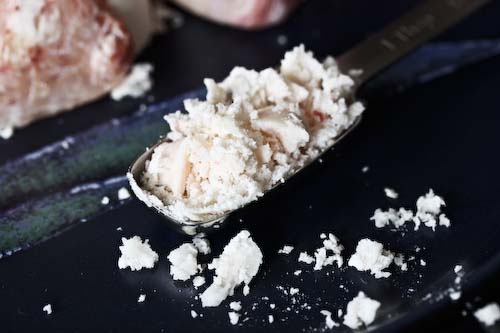 When buying a marrow bone, ask that your butcher cut it in half or in thirds for you, as it makes the process of scooping the stuff out much more manageable.  I used a grapefruit spoon, since I'm ever on the look-out for new ways to use that handy utensil.  As I scraped, the marrow fell in little flakes, much the same consistency as very cold butter.  For this recipe, 1 marrow bone, even a small marrow bone, is sufficient.  When you spread the marrow gremolata over the still-cooking steaks, the marrow begins to melt over the meat as it heats.
If you do have leftover marrow, you can always boil the bone, finish removing it, and, with a piece of good bread, a bit more of that parsley, and a squeeze from your newly zested lemon, have yourself a wonderfully old world snack. 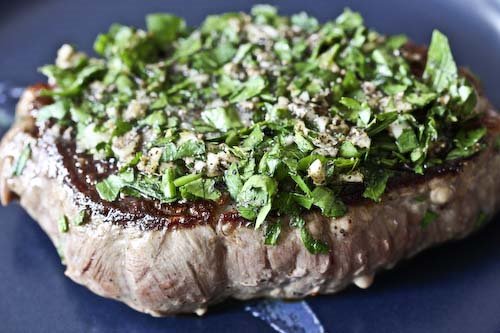 Steak with Melting Marrow Gremolata
Adapted from The Zuni Cafe Cookbook by Judy Rodgers
For the Gremolata
4 tablespoons loosely packed chopped fresh flat-leaf parsley
3 small garlic cloves, finely chopped
Zest from 1 medium lemon
1 teaspoon black pepper
2 tablespoons cold beef marrow
Combine all of the ingredients and toss lightly.  Store in the refrigerator until ready to use.
For the Steak
2 steaks
oil for the pan
salt and pepper
Bring the steaks to room temperature.  Season liberally on both sides with salt and pepper.  Heat the oil in the pan over high heat until it smokes.  Using tongs, place the steaks in the pan and cook for about 4 minutes, until dark brown on the bottom side.  Turn over, and top with the gremolata.  Continue to cook for about 4 minutes more, until the steak is done to your liking and the gremolata has warmed, the marrow melting over the steaks.
Remove the steaks to a plate and allow to rest for about 5 minutes.  Serve.
Email Post
Labels: Judy Rodgers Zuni Cafe Cookbook

Anonymous said…
Mmmm. I love marrow. It's also good chopped up into a red wine sauce (sauce Bordelaise) over steak. But mostly, I just like it smeared on bread with a sprinkle of sea salt.
March 21, 2009 at 3:20 PM