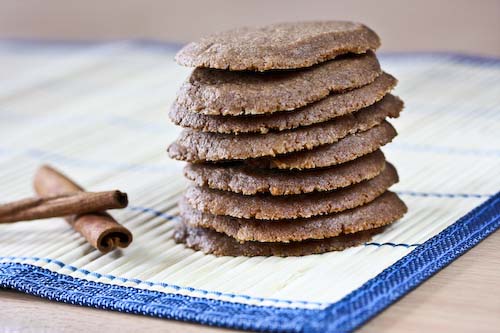 There are people who would have you believe that a name is just a name.  That its moniker doesn't, in the end, change the reality of the rose.  I must respectfully disagree.  After all, Renoir didn't call his idylls "Corpulent Women Lolling Naked Outdoors," but instead titled them "Bathers", thus situating them firmly in a classical tradition.  Sometimes a name is all the justification you need. 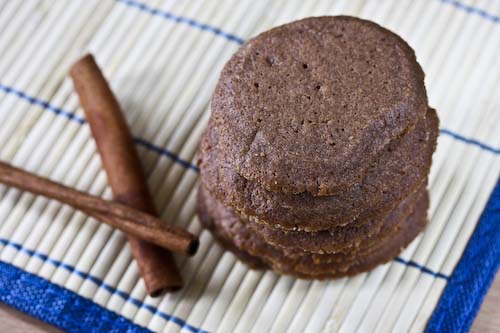 I don't want to say that I need justification for these cookies, necessarily.  But, on second thought, maybe that is what I'm saying.  Because by most measures, they were a failure.  They were meant to be slice and bake, the kind that you roll into as perfect a log as you can manage in order to slice off neat little circles which should, in theory, maintain some sort of integrity.  They should look about the same post-oven as they did pre.  Not in this case.  In this case, they spread into a giant trigonometry problem of touching, interlocking circles.  With a little care and precision, I extricated each from the other.  But they just weren't what I imagined.  Admittedly, and as you can see, they were too crowded together on the sheet to begin with, but I'm judicious to a fault with my dish-using since it directly correlates to my dish-washing, which is all done by hand. 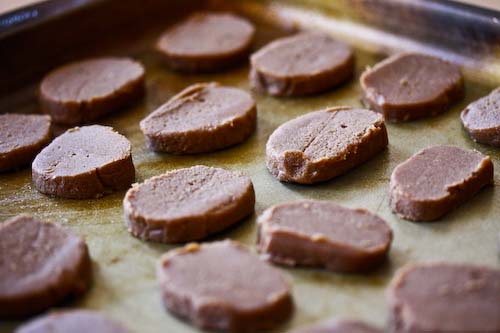 However, the combination of cinnamon, cappuccino and chocolate made their physical defects fade to the background.  And in fact, had I been expecting a thin cookie, there would have been no defects at all.  So to spare you from the same unmet expectations, we'll agree to call them Cinnamon, Cappuccino Chocolate Thins and leave it at that.
Cinnamon, Cappuccino and Chocolate Thins
From The Great Big Cookie Book by Barbara Grunes and Virginia van Vynckt
2 ounces semisweet chocolate
2 sticks (1 cup) unsalted butter, room tempearture
1/2 cup granulated sugar
1/2 cup packed dark brown sugar
1 egg
1 tablespoon instant coffee, dissolved in 1 tablespoon hot water
2 cups all-purpose flour
1 teaspoon ground cinnamon
1/8 teaspoon ground nutmeg
1/4 teaspoon salt
Melt the chocolate either in a double boiler or in the microwave and set aside.
Cream the butter with an electric mixer set on medium speed until light and fluffy, about 2 minutes.  Increase speed to high and add the sugars and the egg.  Beet until the mixture is smooth, then stir in the coffee and melted chocolate.
Stir in the rest of the ingredients and shape the dough into 2 logs, which don't have to be perfect because the cookies will spread anyway.  Refrigerate the dough for 45 minutes.
Oven preheated to 350F, and cookie sheets lightly greased, remove the dough from the refrigerator and slice into rounds about 1/4" thick.  Arrange on the cookie sheet with plenty of room between cookies.  Bake for 8 - 10 minutes until the cookies are firm.  Transfer to cooling racks and cool.
Notes:
* Although I'll provide a link to this book because I want to give full credit, I can't necessarily recommend it just yet.  I have to have a few more goes with it first.
Email Post
Labels: Barbara Grunes and Virginia van Vynckt The Great Big Cookie Book

Snooky doodle said…
Ha I enjoyed reading your post. Surely the name is great influence. I say these look nice though. Pity you consider them a failure
April 9, 2009 at 6:10 PM

Hayley said…
I'm with you on the dishwashing. I try my hardest to avoid it at all costs. The cookies look great nonetheless. And a perfectly suiting name.
April 9, 2009 at 9:00 PM

Diana said…
Thin, thick -- doesn't make a bit of difference as long as it's got the right flavor! I love the idea of a chocolate, cinnamon, cappuccino combination. I bet these would be the perfect companion for a cup of coffee or tea.
April 10, 2009 at 12:09 AM

Becka Robinson said…
I love cinnamon and chocolate and coffee! LOL. I think these are my cookie soulmates ;)
April 10, 2009 at 4:01 AM

The Food Librarian said…
Oh my. These look delicious and beautiful. Almost too pretty to eat. Well, I'll eat a few while admiring the rest of them. Then...I wouldn't want to waste the admired ones and eat them too.
April 10, 2009 at 8:13 PM

Danny said…
Those cookies look SO good. How'd you get the stack to stay up?

I've included your photo in my "Favorite Food Photo of the Week" post. The photos are truly gorgeous!

Creative Classroom Core said…
These are beautiful!
I think they really sound delicious!
Thanks for sharing!
April 11, 2009 at 10:06 PM

Citybrarian said…
Made a batch last night, but I actually cut the butter in half and swapped out some flour for some ground almonds and I have to say that they held together pretty well. I tried cutting from the roll and also balling the batter then flattening with my fingers. I think I like the balled version better! Deliciously spicy cookies, would be amazing with ice cream :)
April 16, 2009 at 5:54 PM