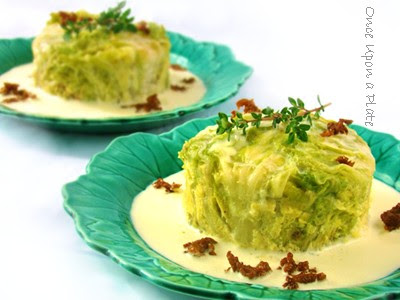 Hi! My name is Mari, and my blog is Once Upon a Plate,  I was really pleased when Andrea asked if I would like to share one of my favorite cookbooks with you on her blog this month.

The book I chose is "Simple Soirees, Seasonal menus for Sensational Dinner Parties" by Peggy Knickerbocker. Peggy divides her time between Paris and San Francisco and enjoys giving dinner parties in both places; she is a food journalist and former caterer and restaurateur.

Don’t let the title referring to “Dinner Party” recipes throw you because the recipes are not just for dinner parties.  Although the book is filled with lots of helpful hints and secrets to assure your dinner party will be a memorable  success, it includes dozens and dozens of recipes, most perfectly suitable for everyday.

Altogether Peggy provides 100 of her favorite recipes, organized by season.  Some of the recipes are classic favorites, others are more unusual such as the one I chose to make for you.  Peggy explains she almost became obsessed with Gnafron after first tasting it at  the restaurant Chabert et Fis, on the Rue des Marronniers in Lyon several  years ago.  She and her dining companion arrived at the restaurant just before closing. When the Gnafron was described to her, she immediately ordered it; a savory flan baked in pale green leaves.  It was love at first bite;  she tried to ask the chef for the recipe, but she had already departed for the evening.  After looking for over a year to discover the recipe, all she could discover was that Gnafron shared its name with a hard-drinking yet philosophical children’s puppet show character named Guignol.  The puppet show was written by Laurent Mouruet in the 1880’s.  Some time later, at a party, Peggy met up with an old friend whose fiancé just happened to live blocks from the restaurant where she tasted her first Gnafron.  He sent her the recipe jotted in French on a cocktail napkin.  The following is Peggy’s interpretation of the dish which is one of her favorites for luncheons, as well as dinners by the fire. 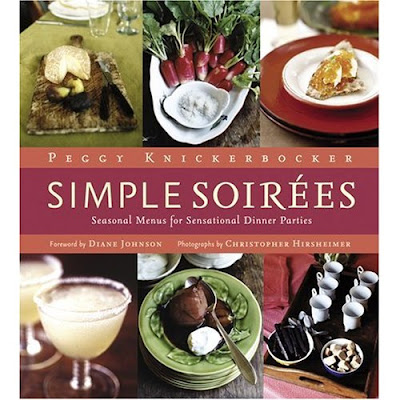 It’s perfect for company as it can be either assembled ahead, then baked when the guests arrive. Alternately, it can be baked ahead and simply reheated at suppertime. But no need to wait for company.

In the book Peggy suggests hors d’oeuvre suggests another specialty of Lyon, a variety of sausages, served on a wooden board, along with chilled radishes, or a bowl of olives.  Then the Gnafron, followed by a crisp red and Green Salad (romaine, radicchio with a red wine vinegar vinaigrette and garnished with toasted and salted pistachios.   For dessert Rhubarb and Strawberry Compote, followed by espresso, and a dish of dark chocolate squares or other candy.

It is a beautiful, coffee table quality cookbook (but one that can actually be used for its recipes).  Plenty of gorgeous photographs by Christopher Hirsheimer, too. 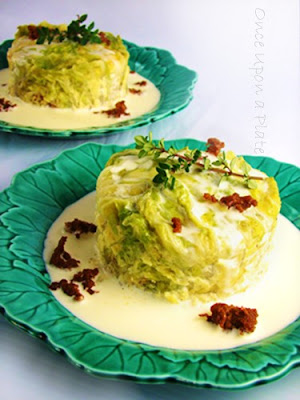 Recipe yields 6 ramekins
Gnafron is a savory flan from Lyon, France. It is baked in edible leaf-lined ramekins.

For the Garlic Cream

Melt the butter in the olive oil in a heavy saucepan, add sausage, carrot, onion, thyme and bay leaf. Season with salt and pepper.  Simmer slowly for 15 minutes; as the mixture becomes dry add the white wine.  Allow to simmer for another 5 to 10 minutes; remove pan from hat and allow the sausage mix to cool for about 10 minutes.

While the sausage mix is cooking, bring about 4 cups of water to a boil in a deep skillet or pot. Salt generously, reduce heat to simmer and blanch the cabbage leaves (tender parts only)* a few at a time. Remove with tongs and allow to drain and cool on clean kitchen towels.

Butter interiors of 6 small ramekins, or soufflé dishes with butter. Line the dishes with cabbage

folded over to enclose the filling.

In a medium-sized bowl, beat the eggs with the cream, add a bit of salt and pepper. Stir the

cooled sausage mixture; mix well. Divide the mixture among the lined ramekins and fold the

overlapping leaves over the top. Do not be concerned if the mixture leaks out around the leaves.

Place the ramekins in a deep baking pan, large enough to hold them all. Pour warm water around them

so it comes ¾ of the way up the sides of the ramekins.

Place the pan in the oven and bake for about 1 hour (begin checking at 30 minutes; mine were done in

45 minutes.  When they are done, the Gnafron will be set and the top will be firm to the touch.  If the

tops begin to brown place a sheet of foil loosely over the tops.  It’s okay if the tops get golden brown.

To make the garlic cream

While the Gnafron bakes, make the garlic cream.  In a small heave pot combine the garlic, sugar, salt and

splash of water; cook over medium low heat for a few minutes. Add a splash of dry white wine;

continue to cook for about 5 minutes.  Turn off the heat and allow the garlic to steep in the cream until

the Gnafron come out of the oven.  Reheat the garlic cream over low heat (it will be thin); remove and

To serve, run a knife around the sides of the ramekins to loosen the mixture. Turn out onto a platter or

individual plates (or serve right in the ramekins.)  Serve with a little garlic cream over the tops, and/or in a pool around them.

*Note on blanching the cabbage leaves:  I blanch the leaves whole, then when they have drained and cooled, cut a “v”

Leaves easier to handle and not as apt to tear while blanching.)

unconfidential cook said…
Oh my, this looks like such a lovely girls' lunch or first course--so beautiful and unusual! Thanks. And that garlic-cream, yum!
April 23, 2009 at 4:25 AM

Unknown said…
Ever since Peg published her genius "Simple Soirees," I have made gnafron for dinner parties and for my eldest daughter's birthday dinner (it's her absolute favorite!). Peg takes seemingly complex dishes and breaks them down into simple recipes that occasional cooks can execute with ease.