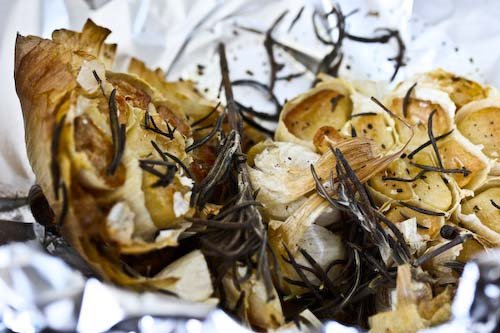 I cannot believe I made this dish today.  We're having 90 degree, summertime weather in NYC in the middle of April.  And because I had already bought the ingredients, and had been planning on making this for lunch without checking the weather, I fired up the oven for 45 minutes, not to mention running 3 burners.  Luckily once it all comes off the heat, and you have a moment to get out of your closet-sized kitchen and into a room with a little air-conditioning, the pasta itself is quite light. 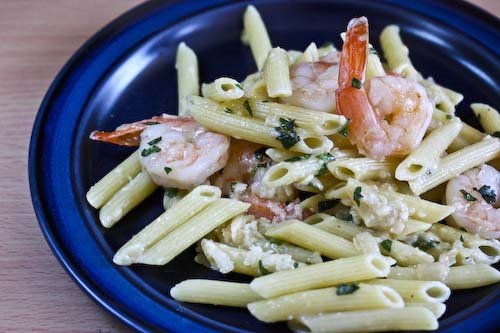 I've used this trick before, substituting evaporated skim milk thickened with a little corn-starch for heavier cream.  Evaporated milk has a certain sweetness that I tend to like, and it performs well in this dish, where the milk is infused with roasted garlic.  The recipe makes just enough sauce to provide a thin coating, which is why it's necessary to finish cooking the pasta in the sauce.  If you're not partial to shrimp, try chicken, or leave the meat out all together and just enjoy a heady combination of sweet roasted garlic, cilantro and parmesan cheese.
Penne with A Lighter Garlic-Cilantro Cream Sauce
Adopted from Jean-Pierre Brehier's Incredible Cuisine
1 whole garlic head
3 tablespoons olive oil, divided
1 sprig rosemary
2 shallots, minced
1/4 cup chicken or veggie stock
1/2 cup evaporated skim milk
1 tablespoon cornstarch dissolved in 1 tablespoon water
1 pound penne
1/2 pound baby shrimp, peeled and deveined
2 tablespoons cilantro, or more if you like cilantro.
Salt and Pepper
Grated Parmesan cheese
To roast the garlic:
Oven preheated to 375, cut the garlic in half sidewise without removing the outer skin.  Place cut-side up on a baking sheet lined with foil and drizzle on 1 tablespoon of oil.  Arrange the sprig on rosemary on top and sprinkle with pepper.  Close the foil and roast for about 45 minutes.  Let cool, then remove the cloves from their skins.
Heat 1 tablespoon of oil in a saucepan and add the shallots.  Cook until they're golden brown, then stir in the stock and the garlic.  Bring to a boil and add the evaporated milk and the cornstarch dissolved in water.  Either pour into a blender or use an immersion blender and blend until smooth.
Cook the pasta according to package directions.  While the pasta is cooking, heat the remaining 1 tablespoon olive oil and sauté the shrimp on both sides.  Add the garlic sauce and season with salt and pepper.  Stir in the cilantro and the cheese.  Drain the pasta, then add it to the pan of sauce, tossing to coat well.  Serve.
Notes:
* The recipe called for 2 tablespoons cilantro but I love the stuff, so I used probably about half a bunch.  If you're one of the unfortunately people who can't stand it, you might consider trying parsley instead.
* Also, this wasn't a ton of shrimp.  I think you could get away with as much as doubling the amount if you wanted to.

Update: I left out how much cilantro you need in the ingredients list!  But I've fixed it now.
Email Post
Labels: Incredible Cuisine Jean-Pierre Brehier

Chocolate Shavings said…
That tip with evaporated milk sounds great, thanks!
April 27, 2009 at 2:45 AM

Esi said…
I know what you mean about cooking in the heat as we had those temps a week ago! The pasta sounds lovely though and the evaporated milk is a good tip!
April 27, 2009 at 4:38 AM

gastroanthropologist said…
after a few sunny days, rain and cold temps back in London so I'd love to turn the oven on and let all the burners go!
Garlic is so great with pasta. You know I don't think I've ever had cilantro with pasta - looking forward to seeing how it will taste.
April 28, 2009 at 11:22 PM

shizzknits said…
This sounds lovely! I wanted to make this for dinner tonight but have a question. How much cilantro do I need? I don't see an amount in the ingredients list...? But maybe I'm missing it?
April 29, 2009 at 12:30 AM

laurie said…
So glad to find this recipe online! I have been making it for at least 10 years after seeing it on one of the morning shows and hadn't made it in a while. Wanted to make it this weekend - it's so yummy - thanks for posting!
February 12, 2010 at 6:20 PM