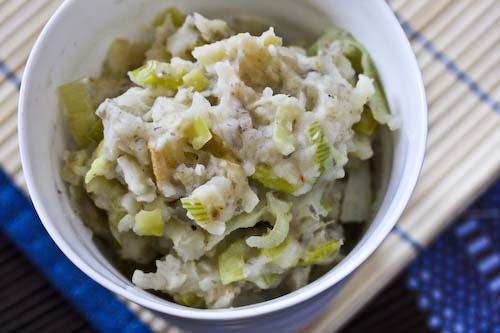 I've been thinking about mashed potatoes and coconut milk for a few days now.  Used to add creaminess to some of our favorite dishes, such as curries, I thought it just might get along famously with the mashed potato.  Besides, coconut milk is often added to sweet potato mash, so maybe it wouldn't be totally out of place.  But why stop at potatoes when you've overbought celery root for your soup, and have two of the three leeks that came in that bunch left over?  I think you know the answer.
Sometimes dishes developed to use things up end up being pretty darn special on their own terms.  We loved this.  Granted, we are partial to things like onion, garlic, leeks etc. so I cooked up both huge leeks, which then refused to fade into any kind of a background in the finished dish.  Fine by me.  If it's not fine by you, try one leek instead.  And that coconut milk? Definitely added creaminess, and there was another level of flavor, of subtle sweetness, hiding at the back of the throat.  Coconut milk was a success, and it might even be my new go-to for mashed potatoes.
Potato and Celery Root Mash with Coconut Milk
Original Recipe
1 medium sized celery root, peeled and chopped
2 potatoes, cleaned and chopped, peeling is up to you
1/2 - 3/4 cup coconut milk (I used light coconut milk)
3 cloves garlic, chopped or pressed
2 leeks, cleaned and sliced
Salt and pepper
Into a large pot, place the celery root and potatoes.  Cover with water and bring to a boil.  Simmer until the potatoes and celery root are fork tender.
In the meantime, heat the butter in a pan and add and leeks.  Sauté for about 5 minutes, until tender, but not brown.  Add the garlic and continue to cook 1 minute more, until fragrant.  Remove from heat and set aside.
Drain the potatoes and celery root and place them in a large bowl.  Add the coconut milk and mash with a potato masher until you reach your desired consistency.  Stir the salt and pepper to taste, as well as the reserved leek and garlic mixture.  Enjoy.
Note:
* You might not want as much leek as I used.  If you're not as much of a fan, or want it to be a smaller component of the dish, use one medium or even small leek instead of two.
Email Post
Labels: Original recipe

Dewi said…
Very inventive way of using both potato and celery root. Never cook celery root before, but use this for celery remoulade a lot. It's my family ultimate salad. Will remember to add celery roots when I make mashed potato. Thanks for the inspiring recipe.
Cheers,
elra
April 17, 2009 at 7:19 PM

unconfidentialcook said…
What a clever combo--love mashed potatoes, love celery root, and the coconut...can't wait to try it.
April 18, 2009 at 12:43 AM

Hayley said…
I'd never thought to add something like coconut milk to a mashed potato recipe, but it makes perfect sense. I love the combos you create. Thanks for sharing!
April 18, 2009 at 4:24 AM

The meaning of this is that you literally burn fat by eating coconut fats (also coconut milk, coconut cream and coconut oil).

These 3 studies from major medicinal magazines are sure to turn the conventional nutrition world upside down!
February 23, 2017 at 12:15 AM