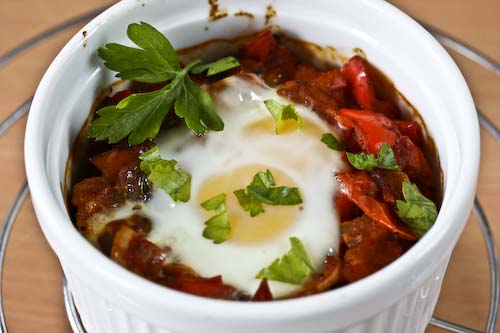 Is there a more natural paring than eggs and tomatoes?  Pairs that get along as well, to be sure. But when eggs and tomatoes play together, their affinity is so natural and mutual they epitomize the prefect, easy going relationship.  And the combination seems to pop up everywhere.  In Turkey, they have their menemen, a dish where eggs are scrambled with peppers, tomatoes, onion and olives, and in Latin America there's huevos rancheros, where eggs, either scrambled or fried, and swimming in a kind of warm salsa are heaped onto corn tortillas.
In Israel, eggs and tomatoes commonly make their paired appearance as shakshouka. When making this dish, resist the temptation to use your garlic press and hand chop all of those cloves.  The chunky, handmade texture is one of its most appealing features. 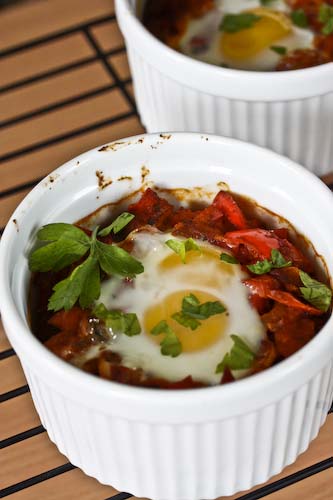 Traditionally, the eggs are baked right in the skillet in which the tomato mixture has been cooked.  In this variation, I've finished them off in the oven, each egg luxuriating in its own single-serving ramekin as it firms to a just-poached consistency.  I like my eggs just poached so that the yolk can be released from its thin sheath with just a flick of the fork, spilling in and over the waiting tomatoes below.  The best possible consummation.
Shakshuka
Adopted from Canyon Ranch Cooking
Olive oil for the pan
5 medium garlic cloves, sliced or roughly chopped
1 medium onion, chopped
1 tablespoon sweet paprika
3 medium tomatoes, chopped (don't bother seeding or peeling)
2 medium tomatoes, sliced
1 medium red bell pepper, chopped
1/4 teaspoon red pepper flakes
1/2 teaspoon ground cumin
1/4 teaspoon salt
1/2 teaspoon freshly ground black pepper
1/4 teaspoon fresh thyme
1 tablespoon chopped fresh basil
4 eggs
Crusty bread for serving
Heat both the oil and the garlic together, until the garlic becomes fragrant and begins to sizzle. Add the onion and the paprika for about 3 minutes, until the onion is well coated.
Add the chopped tomatoes, the pepper, the red pepper flakes, cumin, salt, pepper, thyme and basil.  Turn the heat down to low or medium-low so that the mixture simmers lightly.  Cook for 30 minutes until everything is softened.
Preheat the oven to 350F.
Place 4 ramekins on a cookie sheet.  Put tomato slices in the bottom of each of 4 ramekins and spoon the cooked mixture over the top.  Break an egg into each of the 4 ramekins and bake for about 25 minutes, until the eggs are just set.  Watch your eggs closely, as oven differ.  In my oven it took 25 minutes, but it could take less or more for you.
Serve right away with crusty bread to dunk.
P.S. I didn't get to my Recipes to Rival challenge this month.  Mostly because I always save it for the last second, I've been sick and because my kitchen is just too small (and, I have a feeling, my apartment too easily incinerated) to be playing with fire.  But I'll be back next month with something that's sure to be spectacular, at least in theory.
P.S.  This is one spicy dish, by the way.  I personally wouldn't have it any other way.  But be warned.  This is no stroll through a springtime garden.  More of a mad dash in the hot summer sun!
Email Post
Labels: Canyon Ranch Cooking Jeanne Jones

Dewi said…
OMG Andrea, this sounds so good. I've been to Israel to visit my family many time, it's so funny that I never had this. I had the regular and more common eggs and tomatoes. My father in law is an Israeli, and he is here visiting us right now, he's good at making eggs and tomatoes thing. I'll ask if he can make this for us. Thank you Andrea, I would have never know this if you didn't post about it. I really like the look and the recipe.
Happy Sunday dear,
Elra
April 5, 2009 at 7:19 PM

Andrea said…
Elra, really? I had to do a little research to find out a bit more about this preparation, but the books I looked at said it was very popular in israel. Hopefully one day I'll get to go and see for myself!
April 9, 2009 at 6:29 PM

Laura said…
This looks delicious. Now that both of my kids are gone at school for lunch, I am going to start indulging in all sorts of baked eggs. YUM.
September 2, 2012 at 6:52 AM