Ramp and Potato Soup with Saffron, Chives and Tomatoes 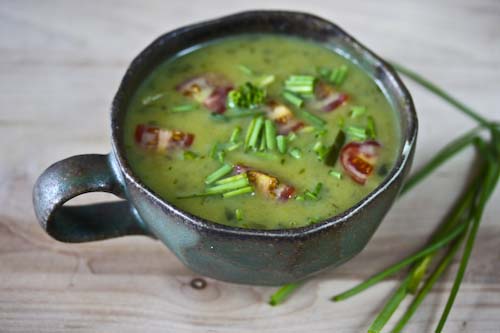 This recipe comes from the Gourmet Garage Cookbook, one of those small gourmet grocery chains in NYC with which I have a love/hate relationship.  We have a dearth of good grocery stores in my part of the city, even the kind of sucky Gristedes is way overpriced, so we're often at the mercy of the Garage.  But you won't find a deal at these little stores, so if I can, I steer clear.  I don't really want to talk about our grocery stores and the price of food on the island, because it makes me upset, so we're going to skip that part and talk about ramps instead. 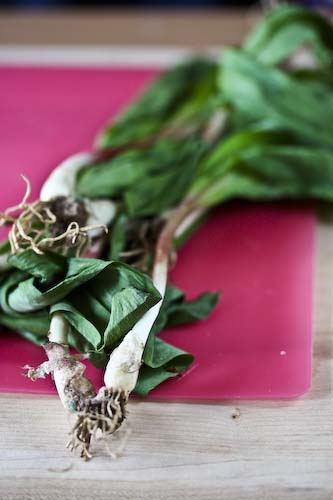 Ramps are, evidently, wild leeks.  They look like scallions, only with a full head of leaves, and have a distinctive garlicky flavor to go along with their onion.  They are so good.  So, so good.  The growing season is short, however, so I suggest getting your hands on some right away.  They would be wonderful in scrambled eggs, are popularly fried with potatoes, and feature in this soup.  I don't know what it is about those early spring vegetables, but a soup of green is so welcome after the gray of winter.
Ramp and Potato Soup with Saffron, Chives and Tomatoes
Adapted from Sheryl and Mel London's Gourmet Garage Cookbook
1/2 teaspoon saffron threads
2 tablespoons boiling water
2 tablespoons butter
About 4 cups ramps, or 4 bunches, trimmed of the root end and chopped (including leaves)
2 medium sized russet potatoes, peeled and diced
5 cup vegetable broth
2 cups milk (I used skim, it was fine)
Salt and Pepper to taste
1/4 teaspoon Tabasco
1/4 cup snipped chives
Good handful cherry tomatoes, quartered
In a small glass, combine the saffron and the boiling water and allow to steep for 10 minutes.  In the meantime, melt the butter in a large dutch oven over medium heat.  Add the ramps and sauté until wilted, about 5 minutes.  Add the potatoes and cook for 1-2 minutes before adding the stock and the saffron along with its liquid.
Bring the soup to a boil, then reduce the heat to low and simmer, covered, for 30 minutes.
With an immersion blender, purée the soup to your desired consistency.  Add the milk and season to taste with salt, pepper and Tabasco.  Heat until it is warmed through, then ladle into bowls and serve sprinkled with chives and topped with tomatoes.
Notes:
*  My fiance believes that as long as you have teeth, you should not purée soups, preferring, as he does, the chunky kind.  I almost hate to say it, but I tend to agree, since I like to distinguish between ingredients in my soup.  So, I didn't purée this one all the way, but gave it a few good turns with the immersion blender, leaving most of the potato in chunk form.
*  You can substitute leeks for ramps if they're out of season

Dewi said…
WOW, Ramps is taking over the blogsphere, amazing! This soup look so delicious Andrea. I haven't tried Ramps yet, but I will!
May 7, 2009 at 7:19 PM

Unknown said…
Oh my goodness, we have a Ramp Festival in Tennessee but I never knew many people who actually cooked with them. I love scallions, green onions, leeks, so I'm sure that this recipe is tasty.
Happy Twirls
May 7, 2009 at 8:52 PM

Dana said…
Ramps grow really well in our climate and I have just started to see them at the markets. I've never quite known what to do with them. Soup is a good start!
May 7, 2009 at 10:29 PM

Paige at The Spice House said…
I found a bunch of ramps while I was (unsuccessfully) morel hunting yesterday and I was looking for something good to do with them. This soup sounds great!
May 7, 2009 at 10:50 PM

Hayley said…
I've never eaten ramps Andrea, but the way you've described them makes me want to change that. I might have to try that 'fried with some potato' idea you suggests. Thanks!
May 8, 2009 at 4:51 AM

VirginiaWestfield said…
Question: when you say cut off the root end, how close do you get? Like do you only include the green part?
May 9, 2009 at 3:24 PM

Andrea said…
Virginia, I include both the white and green parts. Just cut off the very bottom where those little threads are and use the rest. Enjoy!
May 9, 2009 at 4:18 PM

~~louise~~ said…
HI Andrea,
I happened upon your blog while in search of info about The Gourmet Garage Cookbook. You see, I went to an auction today and bought a ton of cookbooks. I must live in a cave because I have never heard of the Gourmet Garage before and was just curious as to how you felt about the book. The copy I got at the auction today is still in shrink rap and doesn't have a price on it. As a collector of cookbooks, and I know this might sound silly, I'm wondering whether I should just leave it as it is?

I really appreciate any input you may have. I'm really like your blog so I must go "investigate." I adore ramps!!!

Andrea said…
Louis, I can't really say how much of a collectors item the GG cookbook is going to be. I can tell you that they sell them in their stores and they seem to be relatively easy to get a hold of through Amazon etc. I'm not really so good with estimating future prices since I tend to buy most of my books used and not in mint condition! Sorry I couldn't be more help.
February 7, 2010 at 7:08 PM