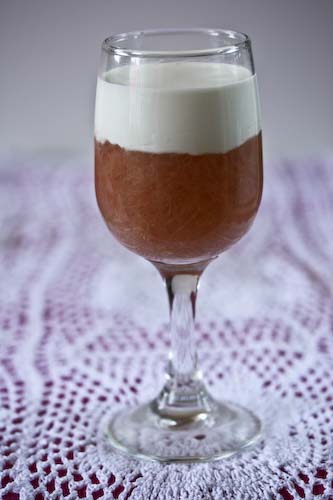 If you've got rhubarb, and an entire pie is excessive, or you want something else to do with it, I know what you're going to make.  The other day, we were walking around some grocery store or other and I spotted a few bright red stalks.  Immediately R began bragging about the rhubarb soups and porridges he used to eat in Norway.  "Porridge" might be a bit misleading.  This is not the gloppy, oatmeal porridge of Oliver Twist, although I'd be willing to bet that you'll be asking for more.  But first, the soup. 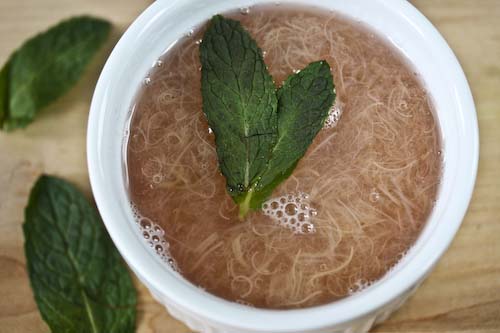 You can see the thin, nearly translucent arabesques of rhubarb threading through the soup.  In Norway, at least in R's family, it's eaten warm, perhaps as an appetizer.  But I snuck a few spoonfuls from the fridge and it was just as delicious as a chilled summer soup, especially topped with a sprinkling of fresh mint (which is not traditional, evidently). 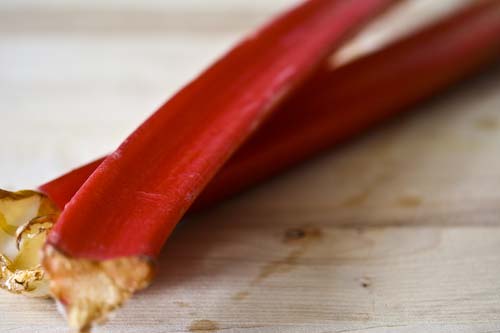 The porridge is a thickened version of the soup, chilled into a kind of jelly consistency without the gelatin.  Eaten with a generous serving of cream and more sugar, it's the pure essence of rhubarb in dessert form.  Not too bad looking, either, if I have to say it.  That first picture is the porridge served in a wine glass and topped by the cream waiting to be stirred in.  On my first attempt (the picture directly below) I added the cream as more of a garnish and was quickly told that I should drown my jelly and stir it all up for the real experience.  Both recipes come from R's father, but I've tried to Americanize them a bit since most people here won't have a genuine Norwegian looking over their shoulder making sure it's done properly.  (Actually, that's not quite fair because R did most of the work on these, I just recorded the steps!) 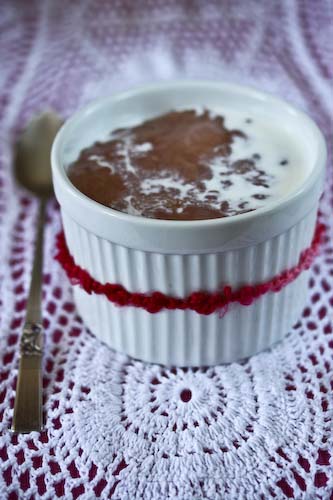 Rhubarb Soup
350 g (just over 1/2 pound) rhubarb (about 3 long stalks), chopped
1 liter of water
1 deciliter sugar (about 1/2 a cup) or to taste
1 teaspoon tapioca flour (or potato flour or cornstarch)
Bring the water to a boil.  Add the rhubarb and allow to cook until it has completely broken down.  Add the sugar to taste, then stir in the flour.  Ladle into bowls and serve.
Notes:
* I added a little fresh mint on top and, since I love mint, thought it was delicious.  But that may not be completely authentic.
*  This soup is meant to be served warm, but it's delicious as a chilled summer soup as well
For the porridge
Half of the rhubarb soup as above, still on the stove
3 tablespoons tapioca flour (or potato flour or cornstarch)
3 tablespoons water
Cream or half-and-half
Extra sugar to taste and for sprinkling on top
Whisk the flour into the water until the flour is dissolved.  Whisk this mixture into the soup until the soup begins to thicken into a porridge.  Remove from the heat and transfer to a bowl.  Sprinkle the top of the porridge with sugar to prevent a film from forming and refrigerate overnight.  The porridge will continue to thicken as it cools.
The next day, serve the porridge with a generous helping of cream, and extra sugar.  Serve chilled as dessert.
Notes:
* Because the porridge uses only tapioca (or potato) flour as its thickener, and no gelatin, this would be the perfect dessert to serve your favorite vegetarian.
Email Post
Labels: Family Recipes

Dewi said…
OMG Andrea, how talented. I really like this Asian style porridge using rhubarb! Scrumptious!
May 10, 2009 at 7:17 PM

veggie belly said…
these are both totally new rhubarb recipes to me! i love the idea of having the soup cold with mint.
May 10, 2009 at 8:30 PM

Charlotte said…
This was a lovely time to print this (just when there is plenty of rhubarb in the garden). Thanks
May 11, 2009 at 4:48 AM

Creative Classroom Core said…
I really love rhubarb, and am always looking for new ways to use it. These are some really great ideas!
Thanks for sharing! Love your blog!
May 12, 2009 at 4:54 AM

Anonymous said…
Hi Andrea,
I just wanted to tell you that my father is very proud to have his recipe precented here :-)
This brings up some childhood meories, long time since I have tried rhubarb-soup and porriage. I will try it for M and H one day, children usually love this as a dessert.