German Spätzle for a Myriad of Uses 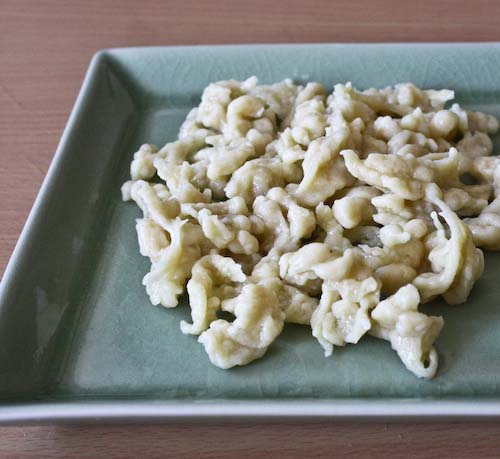 Italy may have more varieties, and it might be more integral to Asian cuisines, but the Germans have pasta, too. Not quite as sleek, a little more mealworm-looking, perhaps, than some of those other noodles. But much depends on how you make it, how specialized your tools are, and relatively how much of a spaz you are with a food mill. Come to find out, I'm quite a spaz. But this was also a first try.
Spätzle is a Swabian delicacy, from the southwest of Germany. For such a seemingly straightforward mixture of flour, egg and water, people have given these little strands some thought. In 1966, Dr. Karl Lerch published a little book entitled Spätzle-Breviary or "The Spätzle-Lover's Bible. It's those kinds of obscure, single-subject books that make a day in a dusty used-book store rewarding. Traditionally spätzle is made with a spätzle board, or Späzlebrett, but these days, we're not likely to have one hanging around. You can also press the dough through a potato ricer, a mesh sieve or a food mill. I took my brand new food mill out on her maiden voyage with this recipe. I have a feeling that spätzle dough is a bit more forgiving when run through some sort of press like this than its Italian counterpart might be, having to be turned through a pasta maker and all. You can use a food processor to make the dough, but for some reason, I decided that for this Old World recipe, I'd use Old World elbow grease. And at the end of the process, it's kind of fun having those little worms rain down into a pot of boiling water. 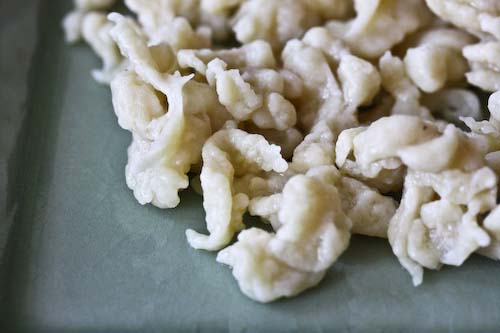 Spätzle is best served, we've found, with a roast (or roasted anything, really) as long as there's some sort of gravy to pour over it. Of course, don't pass spätzle by if you shun meat. Tossed with a little butter, they'll gladly take the place of potatoes in most any meal. Tomorrow, I'll give you one idea of a traditional German meal that includes spätzle, the meal for which these were made. This recipe was adopted from a couple of sources, one of those being Jean Anderson and Hedy Würz's The New German Cookbook and the other being Horst Scharfenberg's The Cuisines of Germany.
German Spätzle for a Myriad of Uses
Adopted from the several sources mentioned above
4 cups flour
4 large eggs
1 teaspoon nutmeg
3/4 - 1 cup water (more or less, as needed)
Large pot of boiling water
Whisk the flour and nutmeg together in a large bowl, and make a well in the middle. Crack the first egg into the well, and work some of the flour into the egg with your hands. Repeat with each additional egg until all of them are incorporated.
Add the water, beginning with the smaller amount, and beat well with a wooden spoon. You should have a smooth batter that doesn't really stick to the spoon. The batter should be bubbly and elastic (you can also do this in a food processor).
Put your dough in your implement of choice (potato ricer or food mill, for instance) and press it through directly into a large pot of boiling water. When the noodles bob back up to the surface, they're done. Skim them out with a slotted spoon and set aside as you finish making the rest.
Email Post