Greens with Ham, Orange and Mint 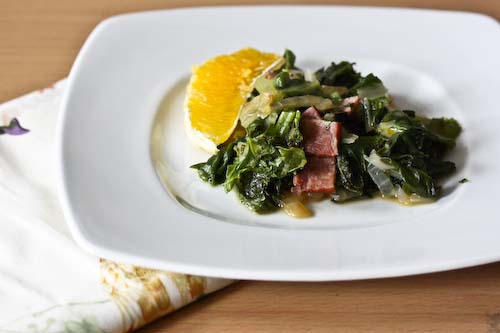 Lately I've been obsessed with greens.  Something that's not hard to be, when the farmers market is bursting with them.  I've found that once I start eating them, I start to crave them.  They can be a hard sell, however, for people not as fond of vegetables as I am.  They tend to be picked around merely because of their color, which seems unfair.  When I made this dish, I had resigned myself to the likelihood that I would be enjoying them alone, giving up a few pieces of bacon, perhaps, as compensation for R. 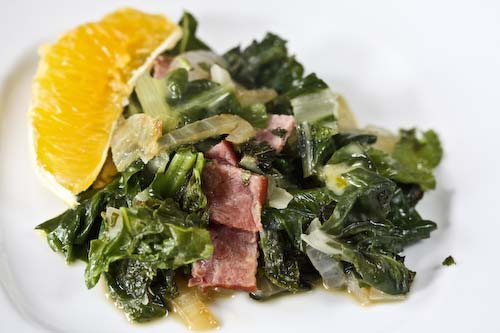 Never has a raw egg yolk whisked with orange juice performed a more unexpected miracle.  Or maybe it was those just-mentioned slices of bacon.  But whatever it is, my greens-hating dining partner had seconds.  And he doesn't ask for seconds lightly.  I'm not saying this will work on everyone.  I've heard children can be particularly obstinate in their prejudices, so I make no guarantees.  Only suggestions.  And I suggest you try this.
Greens with Ham, Orange and Mint
From Betty Fussell's Food in Good Season
1 onion, chopped
1 1/2 pound greens (try mustard, dandelion, curly endive, escarole, chard), washed and chopped.
6 slices bacon, chopped
1/4 cup chopped mint leaves
1 egg yolk
1/2 cup orange juice
1 navel orange, peeled and segmented
Cook the bacon in a 12" skillet.  Once the fat is rendered, remove the bacon and set it aside.  Cook the onion in the bacon fat until just browning.  Combine the greens, the mint and the bacon, then add them to the onions.  Cover and steam until the greens are wilted to your desired doneness.  This took 10 minutes for me.  In the meantime, whisk the egg yolk with the orange juice and set aside.  Drain the greens, and heap them onto a serving plate.  Drizzle the grains with the egg and orange juice mixture and garnish with orange slices.  Serve.
Notes:
* This recipe does include a raw egg, so use eggs from a source you trust and follow all necessary precautions.
*  If you're vegetarian, just leave the bacon out, it's not completely essential
*  I've titled this post Greens with Ham, but then I called for bacon.  You can use either one.

unconfidentialcook said…
V. interesting whisking that egg and oj...and just drizzling on top of everything. It looks just great!
June 24, 2009 at 4:57 PM