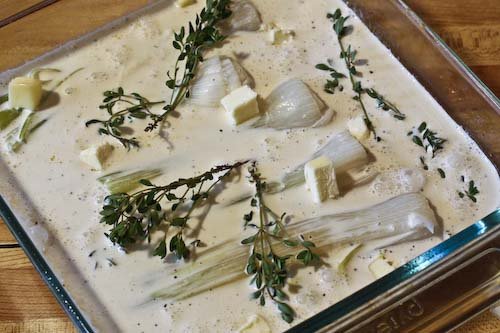 Maybe it's because I was never the kind of kid to get a leading role in the school play, or because I was so quite (that time has obviously passed) that I used to prefer reading during recess to playing with my classmates. But there's something about taking an ingredient usually relegated to the sidelines and giving it its own billing that appeals. I made this dish as a side to roast chicken recently when we had friends over for dinner, and one of them said that he didn't think he'd ever actually eaten a leek. This I find hard to believe since leeks are so commonly used with onions and garlic as the base notes to a dish. I do, however, believe he had never bitten down into a leek when the leek itself was the star player.
Plus, for some reason, anything swimming in cream is kind of beautiful. Like a fairytale mote with water of hazy cream and logs of leeks jostling each other on the surface. Of course, I'm a pretty firm believer that anything braised in cream and studded with butter is probably going to taste good. It's difficult to mess a combination like that up. But add fresh leeks from the farmers market along with some wonderful lemon thyme (which, by the way, is so worth seeking out, but not absolutely necessary) and you come away with something pretty special.
Oven-Braised Leeks with Cream
From Chez Panisse Vegetables by Alice Waters
As many leeks as you'd like to serve. I used 4.
1 cup heavy cream
3 cups vegetable or chicken stock
Lemon thyme
Unsalted butter
Trim and clean your leeks. Bring a large pot of well-salted water to boil, then submerge your leeks in the water to parboil them. They should be tender throughout. Remove the leeks from the pot, then cool them to room temperature. Transfer them to a buttered baking dish and cover with the stock and cream. Dot with some butter, and spread a few sprigs of thyme over the top.
Bake at 375 F for 30-40 minutes, until the cream mixture has reduced enough so that it coats, rather than covers, the leeks.
Email Post
Labels: Alice Waters Chez Panisse Vegetables

Snooky doodle said…
nice way of eating leeks. I ve never eaten leeks either since they re not very common here.
June 4, 2009 at 10:24 PM

Allie said…
I completely agree with you about leeks. Too often they're pushed off to the side, or only thought of for potato leek soup. I always try to find ways to let them stand on their own as well!
June 4, 2009 at 11:26 PM

www.figtreeapps@blogspot.com said…
Now I know what to make when I see beautiful leeks in the store. Much Thanks. Figtreeapps
June 5, 2009 at 10:26 PM