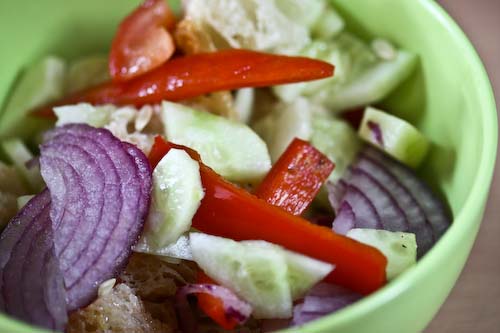 For some reason, and I'm really not sure why, I didn't have very high hopes for this panzanella. I don't know what it is, but the ingredients (although pretty standard for the dish) seemed so, well, ordinary. But come to find out, that's precisely its charm. It doesn't get more rustic than a panzanella, an ingenious use for leftover bread, traditional throughout Tuscany. I even warned R when dishing it out that I thought it would be boring. Wrong, wrong and more wrong. It was delicious. So delicious, in fact, that the entire thing was gone in one day because it's all we ate for lunch, and again for dinner. Not many salads do that, I have to say.
The only thing is that the recipe asks you to take the crusts off the bread, but in hindsight I wish I hadn't. It also suggests that you peel your tomatoes, something I have never brought myself to do. Are tomato peels really so offensive? I mean, that is just not going to happen in this lifetime. But the recipe is so good, I'd buy bread and leave it out just for the occasion. Don't let its humble looks fool you. Don't make that mistake. You don't even have to peel the tomatoes.
Panzanella Bread Salad
From Viana La Place & Evan Kleiman's Cucina Fresca
1/2 loaf day-old peasant bread, crusts removed, cut into cubes
2 tomatoes
1-2 tablespoons capers
1/2 cup good olive oil
1/4 cup red wine vinegar
Salt and pepper to taste
3 cucumbers, peeled and diced
1/2 small red onion, peeled and thinly sliced
1 bell pepper, seeded and cut into strips
Combine the tomatoes, capers, oil, vinegar, salt and pepper in a bowl. Place the bread cubes on a shallow platter or dish, then pour the tomato mixture over the top and throw the cucumbers, red onion and bell pepper on top of that.
Allow the salad to sit at room temperature (or in the fridge, but room temperature is always better) for at least 1 hour to allow the bread to soak everything up. You can add more oil and vinegar if it seems too dry. Can be made a day ahead.
Email Post
Labels: Cucina Fresca Viana La Place and Evan Kleiman

Anonymous said…
I made a bread salad recently. It was more in the middle eastern fattoush family, but like yours, it was eaten up within a day! :)

Angela said…
I've been wanting to make panzanella all summer. Yours looks delicious! Thanks for the inspiration!
September 5, 2009 at 3:39 PM

Anonymous said…
It is one of our favorite salads. We long for it in winter.. You omitted a major step in the directions, however, which is to layer the ingredients, ending with the tomato mixture. This allows the flavors to meld, and the wonderful tomato juices to soak the stale bread.
September 20, 2013 at 5:14 PM