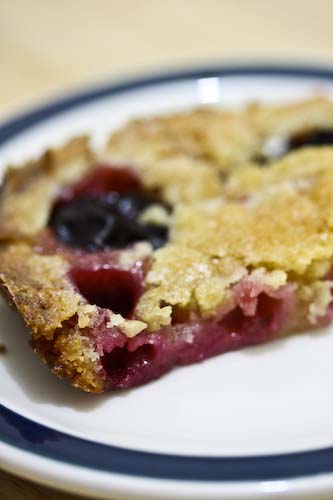 Finally, finally, finally we're back on-line. We also have furniture (finally) and we're unpacked (finally!). I've been saving up a few recipes for this very day, but there's one I want to get out there right away: my family's pflaumekuchen, or German plum cake recipe. Now's the time for a couple of reasons. It's plum season, and September is the best time to find the Italian prune plums so wonderful in baking. (Look for those long, oblong-shaped plums, not the round ones you're probably used to eating out of hand.) Also, it's an old family recipe that I promised to you around this time last year, when I made a different pflaumekuchen. Although good, I vowed to return to my family's recipe this year. 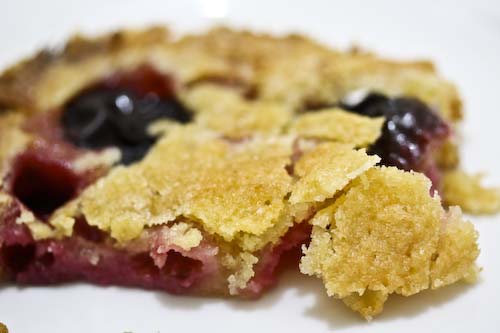 Like the other recipe, this one has just enough crumb to hold the plums in, but in our version, there's no yeasted tart dough. Actually, it's mostly butter. And it has the structural integrity of, well, butter. In other words, not very much. So you can't expect pretty slices here, that buttery cake is in no way strong enough to support the weight of the plums, but it does do a wonderful job of soaking up the purple plum juice as it bakes. Actually, it reminds me a bit of the Nantucket Cranberry Pie I made a while back, and which, by at least one account, might be the easiest cake out there. This one is pretty darn easy as well.
The recipe comes from my paternal great grandmother, and originally she called for a mixture of butter and shortening. I almost never bake with shortening, so the little can I buy for this occasion goes unused the rest of the year. As an experiment this time around, I decided to try it will all butter, and really see no reason to go back. But I'll give you the choice in case you have some shortening to be used up.

UPDATE: This recipe won first place in a dessert competition held by the Museum of Modern Art, New York. You can read about the competition on my post here, which also includes a recipe for a delicious cream to serve alongside. 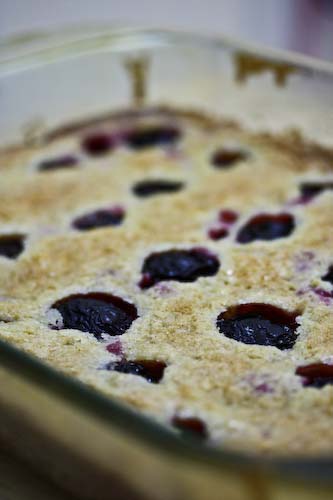 Erna Welp's Pflaumekuchen, or German Plum Cake
15 Italian Prune Plums, halved and stone removed, but not peeled
1 stick butter, plus either 1/4 cup shortening or another 1/4 cup butter, softened
1 cup sugar
1 egg
1 teaspoon baking powder
1 teaspoon vanilla
pinch salt
1 cup flour
1 1/2 tablespoons milk
Preheat the oven to 325F and grease a 9x13" baking pan and set aside.
With an electric mixer, cream together the sugar and butter/shortening until well combined. Add in the rest of the ingredients except the plums and mix until combined. Spread the batter out on the bottom of the baking pan (it will be a relatively thin layer, so use your spatula to spread it around and cover the entire bottom).
Place the plum halves skin side up in rows on top of the batter. Bake for 1 hour, until it passes the toothpick test. Cool before serving and enjoy!
Email Post
Labels: Family Recipes

Eliana said…
Thank you so much for sharing your great grandmother's recipe with us. It looks fantastic.
September 22, 2009 at 3:03 AM

Hope said…
Thanks for the plum cake recpie, we have more plums than we know what to do with since all of our trees are heavy with them!
ps-I moved from New York to Scotland to study art history, so the world balance of art historians has been preserved!
September 22, 2009 at 10:46 AM

Doc Rock said…
When we lived in Bavaria we called this zwetschgendatschi or zwetschgenkuchen for the so-called "Italian prune plums" [zwetschgen] which grew on a wonderful tree in our backyard. Yummy!!!
September 22, 2009 at 7:23 PM

Anonymous said…
Mmm, this looks so nice, almost shortbread like! And I love shortbread - not to mention plums!
September 22, 2009 at 10:52 PM

Anonymous said…
Buttery cake topped with Italian prune plums = taste like heaven. :D
Love the simplicity of the recipe!
- Jackie
September 23, 2009 at 3:30 AM

Susie said…
This looks divine, I was actually looking for a plum cake recipe for baking night, I think I'll give this one a shot! Can you use other plums?
September 23, 2009 at 4:33 AM

Andrea said…
Susie, I don't know how other types of plums will work. The Italian prune plums are definitely the traditional variety (I think Doc Rock would back me up on this!) and they turn a beautiful fuchsia color when baked. They're very much in season right now, so I would definitely recommend trying some if you haven't before. If you try other plums, let me know how it goes!
September 23, 2009 at 2:15 PM

Anonymous said…
This is just the recipe I've been looking for! I hope my CSA has another batch of plums to come!
September 28, 2009 at 8:14 PM

moongirl said…
I made this last night and loved it. It was very easy. The corners were the best! Thanks for sharing.
October 5, 2009 at 7:45 PM

Anonymous said…
This Kuchen ist total unglaublich! I made it for 4th of July and my guests went NUTS over it. Fantastisch!! Funf Sterne!!
July 10, 2010 at 7:18 AM

Felyna said…
Thank you so much for this fabulous recipe!

I've made the all-butter version with 3/4 c. sugar using several different types of fruit (prune plums, golden plums, nectarines and blackberries, blueberries - and all were delicious and disappeared within 2 days (and that's saying something for a family of 3).

I've also made this in a square pyrex dish for a thicker cake - again, it turned out perfectly (baked for 1 hour at 325).

Next, I'm going to try lowering the sugar in the cake to 1/2 c. but mixing in chocolate chips - my husband is VERY excited to try this new experiment.

Merith said…
I know this is a year in the making, but I just baked this tasty cake - yum! My mom also commented on the beauty of the plums and how they change during the baking process. Thanks Andrea
October 22, 2010 at 8:11 AM

Whitney Simone said…
I'm so glad I founf this. My mom passed in 2008 and I never found this recipe in her collection. This is exactly the way I remember my great-grandmother's recipe.
November 17, 2010 at 1:01 AM

aJenniferOriginal said…
I made this last night with black plums from the grocery and it was AMAZING. Thank you so much! I kept saying FLAM-eh-KUCHIN over and over while I was eating it to remember the name so I could brag with fluency.
September 14, 2011 at 4:44 PM

Phyllis Segura said…
I noticed in the MOMA video that you used the larger round plums and not the typical Italian plums. Also you did not cover the batter with them but used only a few slices for each portion of cake. That varied from the recipe given. It's a very simple recipe. The famous Burros plum cake is also a good one. I always add some lemon zest.
October 6, 2011 at 11:19 PM

Andrea said…
Phyllis, good points. The reason we didn't use the traditional plums was that they were out of season by the time of the MoMA event. Their season is very short, and as the Italian prune plumbs are smaller than normal plums, we elected to fan sliced plums out a little so they'd cook through. If you can use, the prune plums, but the recipe will also work with regular plums.
October 7, 2011 at 3:41 PM

Andrea said…
Here's a little explanation for the butter: In American measurements, you need 1 stick of butter (which is 1/2 cup), plus either another 1/4 cup of butter or a 1/4 cup of shortening. If you're baking outside of the US, a stick of American butter is 113 grams, plus you'll need half of that again (so 56 grams) of either butter or shortening. I hope that clears things up a bit!
December 15, 2011 at 1:23 PM

Anonymous said…
andrea, this is a marvellous recipe. I have made it many times, and whoever eats it immediately asks for the recipe. So simple, and delicious... I make it with Angelica plums, and the taste and the colour is so very nice. Thank you for sharing this recipe. Regarding your blog, it would be very good if you also add "search" button based on ingredients. what are the other family recipes you have in this blog?
March 18, 2012 at 11:10 AM

I'd never thought about using frozen plums, but I'm glad to know it works. I'll look into getting some kind of add-in to sort by ingredients, since I think at this point the list is very long for me to be able to do it by hand. But I have labeled most of the family recipes on the site as such, if you click on the tag at the bottom of this post, it should bring you to a list of them. They include recipes from my family and from my Norwegian husband's family. So Northern Europe is well represented!
March 18, 2012 at 11:16 AM

Aiden said…
I've made this a couple times for church functions, it doesn't seem terribly popular, (but then there's usually a bunch of other desserts like brownies) That's fine with my husband though! He LOVES this cake.
April 18, 2012 at 7:35 PM

Conniesua said…
Hello, I would like to do your recipe, It I can see a beautiful picture, but I dont know how many gms has a "stick butter", I hope your answer.
Thank you,

Unknown said…
I made this after dinner tonight. Simple and delicious! I and couldn't stop eating. Definitely a keeper! Thanks for sharing your family recipe!
October 16, 2013 at 4:57 AM