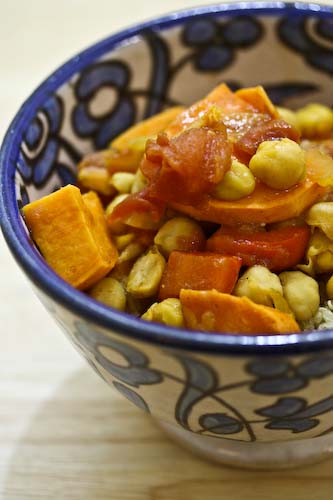 I don't need to tell you what season it is. Starting off with something like "It's Autumn!" is a little insultingly obvious. But, see, the thing is, it is autumn. We're eating totally different things than we were this time, even last month (when I'm not just feeding myself yogurt and cereal. It happens.). My diet at least is overwhelmingly orange. Persimmons, squash, sweet potatoes, all orange. It's like consuming a little of that near-electric autumn light. You know, the kind that nearly shimmers.

But anyway. My mission right now is to cook, when I cook, in large enough batches to sustain myself over several lunches brought to school, and even a few dinners. This recipe not only fit that qualification, but made several fellow orals-studiers a little jealous (I could just tell, okay?). And the best part about this, is that it gets better over the course of a few days. Served with a big helping of quinoa (or couscous if you prefer) it will keep you going for hours. Also, and you would never believe it if I told you after you'd had a bit, this recipe is made with zero oil. Zero butter. Zero, zero, zero. The veggies are sweated in vegetable broth, then flavor is built in layers around eastern spices and the character of the vegetables themselves.

Did I mention that it's utterly delicious? It is. Promise.

UPDATE: I just wanted to reiterate that this is best served over some kind of grain like quinoa or over couscous. Not only will that stretch the amount of food you get, but this isn't particularly soupy, with just enough broth to give your grain base some flavor.
Saffron-Spiked Moroccan Stew
From Colleen Patrick-Goudreau's The Vegan Table
1 1/2 cups plus 3 tablespoon vegetable stock, divided (you can use water, and more stock if you want a soupier stew)
1 large yellow onion, chopped
2 large red bell peppers, seeded and chopped
3 garlic cloves, minced
2 teaspoons brown sugar
1 teaspoon ground coriander
1/2 teaspoon ground cinnamon
1/2 teaspoon ground cumin
1/4 teaspoon ground cayenne
1 teaspoon grated or minded fresh ginger
1/2 teaspoon saffron threads
2 medium sweet potatoes, cut into 1/2" cubes
1 15 ounce can diced tomatoes (don't drain them)
1 15 ounce can chickpeas, drained and rinsed
Salt and pepper to taste
Heat 3 tablespoons of the stock in a soup pot over medium heat. Add the onion, peppers and garlic and sweat the vegetables until the onions are translucent. This should take between 5-7 minutes. You can add more liquid if it starts to evaporate too much.
Add the brown sugar, coriander, cinnamon, cumin, cayenne, ginger and saffron, and stir to coat well. Cook for 1 minute, then add the sweet potatoes and continue stirring. Stir in the tomatoes with their juices, the remaining stock and the chickpeas. Make sure the potatoes are submerged in the liquid so they'll cook. I found that this amount of liquid didn't quite cover everything, but I also didn't want my stew to be overly runny so it would be more transportable.
Bring the liquid to a boil, then reduce the heat to low. Simmer until the sweet potatoes are cooked, but not overly. This will take about 30 minutes. Season with salt and pepper to your taste, and serve over quinoa or couscous.
Email Post
Labels: Colleen Patrick-Goudreau The Vegan Table