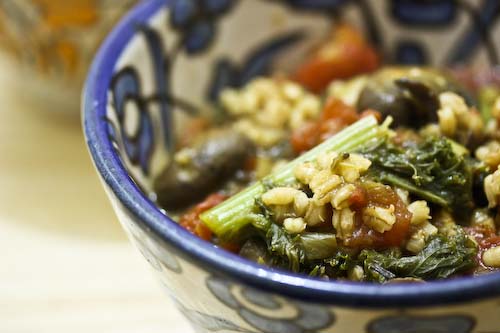 You. Guys. (And girls, especially you girls). I am finally back from the black hole of orals. Yes, I passed, after 4 months of 9 hour study days that ended up being closer to 12 hour study days by the end. When I finished in mid-December, I crashed pretty hard right afterward, then I went home for winter break and didn't do anything that required, you know, effort. And you might think that after the hell that is orals one would be free and clear. But you'd be wrong. Because the next requirement is the worst kind of annoyance, a two-week paper. What's that, you ask? It's just what it sounds like. You pick up a sheet of paper with three topics listed on it, chosen by your orals committee, and from that moment you have two weeks to choose a topic, do the research and write a 20 page paper. Gross. I know. It is. 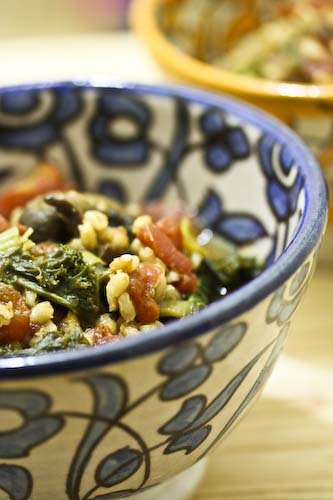 I just finished my draft, and it's due on Tuesday, so I'm sittin' pretty enough to actually cook something for myself to eat. I already missed pretty much the best part of the entire year for eating (late summer/early fall...I miss you! I promise we'll be together again next year!). But ever the optimist, even in winter, I can find something to crave. Have a guess? Does the title of this post give it away? It's kale. Green, leafy, glorious kale.
And the recipe is super easy. And if you have an iPhone (like I do, thanks to Christmas and my generous parents!) you can even get the recipe off of Epicurious's iPhone app and have it with you while you shop. A very handy thing when the first two grocery stores you try have neither kale nor leeks (aahh New York City, and you're supposed to have everything).
Barley Stew with Leeks, Mushrooms and Greens
Directly from Bon Appetit, December 2009
Olive oil for the pan
1 8 ounce container baby bella mushrooms (button mushrooms)
2 garlic cloves, run through a press
2 1/4 teaspoons minced fresh rosemary
1 14.5 ounce can diced tomatoes in juice
1 cup pearl barley
4 cups (or more) vegetable broth, depending on your preferred stew consistency
1 bunch kale, torn up (they say to trim it and remove the center stalks, but I have never understood why one would want to do that. I love the center stalks, and I hate wasted time)
Heat the oil in your soup pot over medium head, then add the leeks and season them with salt and pepper. Sauté them until they begin to soften, about 5 minutes. Be sure to stir often, so they don't burn. Add the mushrooms, garlic and rosemary and increase the heat to medium-high. If your pan begins to dry out a little, you can add some broth. Sauté until the mushrooms soften and begin to brown. This should take about 7 minutes. Again, be sure to stir often.
Add the tomatoes with their juice, stir to combine, then add the barley and 4 cups of the broth. Bring the mixture to a boil, reduce the heat to low, cover, and simmer for about 20 minutes. Add the kale, and stir until it's wilted, only about a minute. Cover again, and continue simmering until the barley are as tender as you'd like them. You can add more broth at this point depending on how soupy you want your stew. I like my barley a little chewy, so the suggested 10 minute cooking time worked for me. You can cook it longer if you want less resistance from your grain.
Serve and enjoy!
UPDATE: This is great for leftovers, but barley will absorb the rest of the liquid. To me, that was okay, I ate it like a warm barley salad. But you could also keep some extra broth on hand for re-souping it later.
Email Post
Labels: Bon Appetit

Sophie Sportende Foodie said…
We missed your lovely posts! Nice to hear from you again!

Now, this healthy stew is singing to me!!!

Anonymous said…
Welcome back! (And congratulations on surviving!) Speaking of places that are supposed to have everything, I haven't seen so much as a single leaf of kale since arriving in Paris. What? Really. So I feel your pain.
January 18, 2010 at 6:14 PM

Lazy_Ducky said…
Lovely! I got barely last time from grocery and was thinking what shell i cook with it. You gave me a great idea!
January 20, 2010 at 7:24 AM

Ragnar said…
Does this mean that I will be served homecooked meals again:)!? Of course you knew that I would love it when you started up with my old pal Kale;)...
January 26, 2010 at 4:36 PM