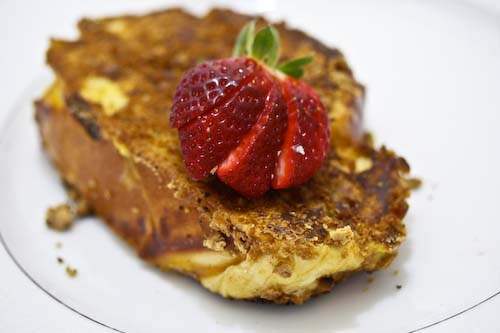 So, there are, like No degrees outside right now. With the wind chill, it was zero yesterday, which means a complete absence of degrees. Gross. I've been trying to embrace the dress with tights and boots thing lately because it looks cute and about doubles my winter wardrobe. But all I can think when I see some poor girl dressed like that in weather like this is "liar!" Because it just is not warm enough for only tights, and pretending won't make it so. I need thermal underwear under my jeans right now, and fleece-lined everything. Fleece-lined underwear? That has potential...
So anyway, this weather makes me cranky because it makes me feel trapped and unmotivated. And it takes away my ability to wear tights as pants. It ruins all the fun. You know what might make you (and me) feel better about it? Bashing a few sheets of graham crackers in a ziplock bag with a rolling pin. Bashing is always fun. Then once you've dialed up your body heat by a few degrees, you can coat some french toast in said crumbs and feel awfully self satisfied.
The idea comes from one of those big breakfast books, but the recipe is standard french toast dredged in some graham cracker crumbs before cooking. Next time, I'd embellish it a little with a more interesting batter. You know, by adding things like citrus zest, cinnamon, vanilla. Definitely, in fact, that's what I'm going to give you, none of this standard, boring french toast business. Get ready.
French Toast with Graham Cracker Crust
Graham cracker crust idea from Maryana Vollstedt's The Big Breakfast Book
Day old bread of your choice (challah is one of my personal favorites)
Juice of 1 orange (you can use the zest, as well, but wash your orange first in that case!)
1 teaspoon vanilla
Dash cinnamon
3 eggs
3/4 cups milk
1 cup graham cracker crumbs, from about 3 full sheets of crackers
Butter or oil for frying
In a shallow bowl, whisk together the orange juice (and zest if using), the vanilla, the cinnamon, the eggs and the milk.
Use a food processor or place the graham crackers in a ziplock bag and bash them with a rolling pin until you've achieved graham cracker crumbs. Place the crumbs in a shallow bowl.
In a skillet, melt enough butter to coat the bottom on medium heat. Cut as many slices of bread as you'd like, dip into the batter on both sides, then into the graham cracker crumbs. Cook each side of the toast for a few minutes on each side. Serve with whatever floats your boat.
Email Post
Labels: Maryana Vollstedt The Big Book of Breakfast

Megan said…
Just what my kids would love - bread covered in graham crackers!

Anonymous said…
Sounds delicious! And I'm with you on the longjohns - it is just too cold for anything but multiple layers. (Although I have seen wool tights for sale here, maybe they would work?)
February 1, 2010 at 8:16 PM

dining room table said…
This is delicious! I want to have some right now! Kids will surely like this.
November 15, 2010 at 4:26 AM