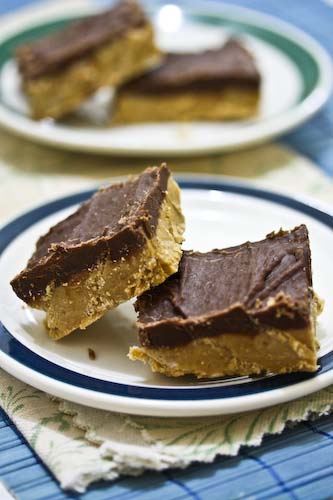 These bars have been a family favorite for a long, long time. Or at least, I can't remember the first time I had them, although I know it was my aunt Joan who introduced them. I'm also pretty sure this was the first recipe I learned to make all by myself. It's that easy. These days I use my little mini-prep food processor to make things like graham cracker crumbs, but back then my mom loaded the crackers into a ziplock bag and let me bash them with a rolling pin. I'm still a pretty big fan of cracker bashing. 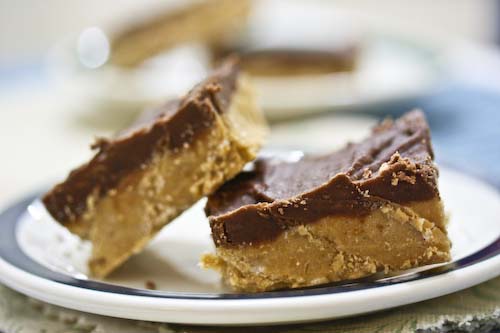 These were my grandfather's favorite. I remember the plate being passed around one summer day, coming to me before heading to him, and as I reached for the largest square, he told me "ladies don't take the biggest one." That's not something I was used to hearing from my grandfather. The same person who tried to start teaching me geometry before I could properly add. Who claimed that taking a dip in the pool was even better than an actual shower. Ladies? Really? So I went for the second biggest one, only to watch him grab the largest square right after me. Tricked.

My mom, who wrote this recipe out for me, has kind of a funny way of writing down recipes. She tells you the ingredients only as you need them, rather than in one list at the beginning. I'll put them in bold below, so it will be easy to make your list.

Mix together in a bowl (using your hands is an easy way to go):
1 cup melted butter (just do it in the microwave)
5 oz (9 sheets) of graham crackers, crushed
1 cup peanut butter
1 lb. box confectioners sugar (powdered sugar)
Spread the mixture in a 9x13 pan (pyrex, for example) and set aside.

In a small saucepan, combine the following, and allow to come to a boil for about 1 minute:
1/3 cup milk 5 tablespoons butter 1 cup regular sugar
Remove the pan from the heat and stir in 6 oz. of chocolate chips (half the normal 12 oz bag, you can just estimate.) as well as a dash of vanilla (about a cap full).
Stir until it's smooth, then pour the chocolate mixture over the peanut butter layer.
Refrigerate, uncovered, for at least 3 hours before cutting and serving.

UPDATE: One commenter suggested adding some salt to the peanut butter layer. I think this is a very, very good idea and a kind of modern update. I haven't tried it yet, but I'm planning on it next time I make these.

Andrea said…
Megan, I'm pretty sure the recipe can be cut in half pretty easily, since there's no baking required!
February 4, 2010 at 5:07 AM

Ricki said…
You've described it perfectly as "bakeless" instead of "raw"--love it! These sure do sound delicious (I'd let Grandpa have the biggest piece--I'd just eat the rest of the pan!) ;)
February 4, 2010 at 3:20 PM

Sean said…
Wow, those are very convenient when it is too hot to run the oven. I might just have to make some this summer.
February 4, 2010 at 4:51 PM

Anonymous said…
Oh my, do these look delicious or what?! There really is no better combination in the world than chocolate and peanut butter. YUM :)
February 5, 2010 at 5:27 AM

Anonymous said…
This comment has been removed by a blog administrator.
February 5, 2010 at 9:17 AM

Sasha said…
Wow, these look great. Chocolate and peanut butter were just made for each other, don't you think?

Eliana said…
nothing like a good sweet treat that requires no baking. these look great.
February 8, 2010 at 8:38 PM

deckard said…
My wife made me these for Valentine's Day using this and they were edible, but your recipe calls for WAY too much sugar! She only used 14 oz instead of a pound because it's all we had and they were still almost unbearably sweet, with the sugar almost completely drowning out the peanut butter flavor.

I looked at some other recipes around the internet and found that they use at most 2 cups or a half pound of powdered sugar, although the Toll House recipe uses only 1 cup powdered sugar to 1 cup peanut butter, which I suspect is a better ratio.

That said - I've had these before at parties made by other people and they are absolutely delicious when they don't have four times more sugar than necessary :-)
February 16, 2010 at 12:12 AM

Andrea said…
Deckard, you're right, these are incredibly sweet. It's not a misprint, however, this is how they've always been made. More like a peanut butter fudge than anything else, really. (For example, one peanut butter fudge recipe I've seen calls for 3 1/2 cups confectioner's sugar and 2 1/4 cups brown sugar per 3/4 cups peanut butter.) Needless to say, they're not meant to be finished off in one sitting, but savored like any good piece of too-sweet fudge (which they pretty much all are).
February 16, 2010 at 12:37 AM

Leiris Elipses said…
I just finished whipping up a batch of these, and now I just have to wait for them to cool in the fridge. I can't wait! I did sneak a bit of the peanut butter mixture before putting it in the pan. It was good!

One tip for those who like their peanut butter treats to have more of a Reese's peanut butter cup flavor -- add a tsp or 2 of salt. That can also help balance out the sweetness. I also decided to add crunched up rice crispies along with the graham crackers just for some added texture. Hopefully, they will still turn out well!

All Natural Dijon Mustard can actually have a profound effect on metabolism, even at rest, as well as improving overall digestion and nutrient utiliization.

And if that wasn't enough, other herbs and spices such as ginger, garlic, lemon, cayenne, basil, parsley, and thyme have all been shown to have significant metabolism-boosting properties as they stimulate your taste buds to boot!

Fact is, when you learn how to cook with the right ingredients, you can really begin to enjoy both the fat-burning properties and the ultimate flavor of the foods you use to slim your waist.

And that's exactly what Dave and Karine have put together in the Metabolic Cooking series -- more than 250 mouth-watering, fat-annihilating recipes for you to choose from. And of course, they also have many fat burning salad dressing recipe!