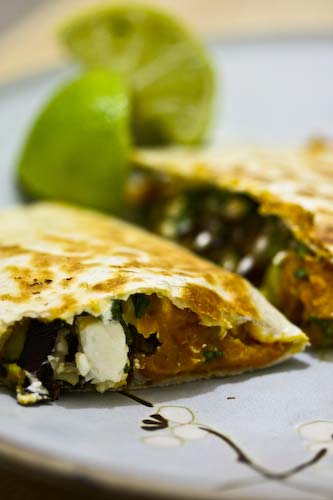 So last night? Last night I made something delicious. I mean, for me, you'd have to work pretty hard to make something inedible out of butternut squash. Luckily, you can also work not-very-much to make something Wonderful. Case in point.
This recipe is a conglomeration of several recipes floating around the web, in magazines, in books, and just ingredients in my pantry. I would make it again, I would feed it to guests, I would add it to my personal arsenal. You know the arsenal. 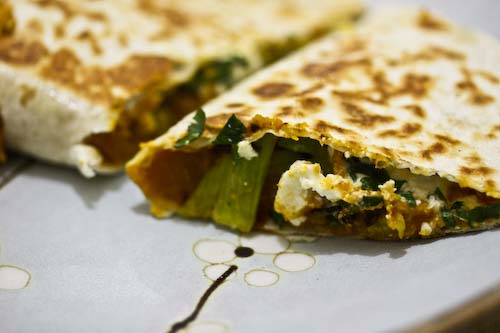 So the impetus behind this one was the discovery at my local Turkish produce place of pre-cut butternut squash cubes for, like, two bucks. I used one package, that was marked .86 lbs. That's hard to translate. I think you'd be fine with about half a butternut squash. The recipe makes enough filling for two very stuffed tortillas, enough for dinner and lunch the next day, in my case. You can always double it for more and use your entire squash. 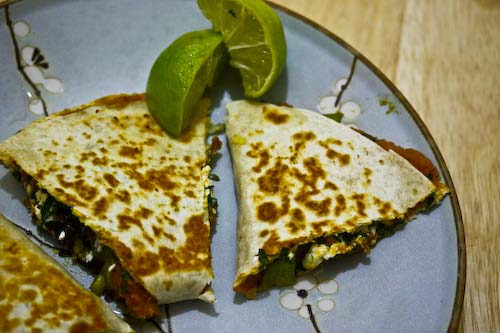 NOTE: If you start with a whole squash, instead of the pre-cubed things, this is what I would do: I would cut the squash in half, drizzle the olive oil, cumin and chili powder from the recipe onto the cut side, place it cut-side up on a cookie sheet and roast it in the oven until the squash comes out easily from the skin. I am not a believer in skinning and cubing raw squash. Raw squash = too much effort. Bleh.
Butternut Squash Quesadillas with Leeks and Feta
About 1/2 a butternut squash, I would guess, or a contained of pre-cubed squash (see note above)
1 leek, cleaned and chopped, white part and pale green part only
1/2 teaspoon cumin
1 teaspoon chili powder
2 teaspoons olive oil
Butter or oil for the pan
2 flour tortillas
1/4 cup cilantro
1 lime, quartered
Feta cheese, as much as you'd like
Preheat the oven to 400F. Toss the butternut squash cubes with 1 teaspoon of the oil, the cumin and the chili powder. Spread the squash on a cookie sheet and roast in the oven for 15 minutes. In the meantime, toss the leeks with the other teaspoon of olive oil. After 15 minutes, remove the squash from the oven, shake it around on the pan so it doesn't stick, and scoot the squash to one side of the pan. Add the leeks to the other side of the pan. Return the cookie sheet to the oven and continue roasting for another 10 minutes or so. The butternut squash doesn't have to be completely mushy when you take it out.
Remove the sheet from the oven and let the squash cool a little before tossing it into a blender or food processor. Process only the squash (set the leeks aside) until smooth and creamy.
Heat a little butter or oil in the pan on medium. While the pan is pre-heating, spread the squash mixture over one side of a tortilla. Top with half of the leeks, half of the cilantro, and as as much feta cheese as you'd like. Fold the tortilla over into a half-moon shape. Cook the tortilla on each side for about 1 minutes, until the tortilla is browned in spots. Repeat with the other tortilla.
Remove to a plate, cut into thirds and serve with a lime wedge or just squeeze the lime juice over the quesadillas.
Email Post
Labels: Original recipe

Anonymous said…
Yum! This sounds similar to a thing that I make sometimes where I grill sweet potatoes with cumin and chili powder and serve them in soft tacos or quesadillas with goat cheese and whatever else I have around that I think will go (tomatillo salsa, roasted poblano peppers, avocado, etc.)
February 2, 2010 at 6:08 PM

sweeetheartfever said…
i keep coming back to this post over and over again, haha. it looks SO good, exactly every kind of thing i'm craving right now: winter vegetable, my favorite kind of cheese, warm, comforting...