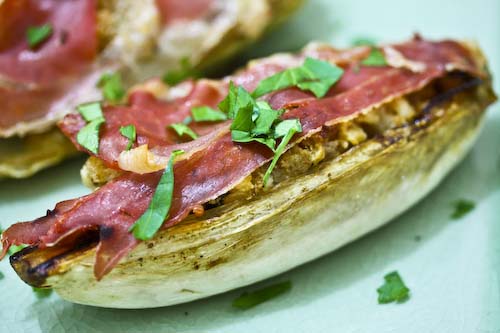 For some reason, endive in New York is strangely...available. I mean, in a city where three places in a row might run out of kale in the middle of winter, I can always find endive. I don't get it either. But the result is that I've had my eye out for some way to use them, other than just throwing them in a salad, for about a year now. Sometimes you can't rush these things, and you have to wait for the right recipe to come to you. Well here it is. 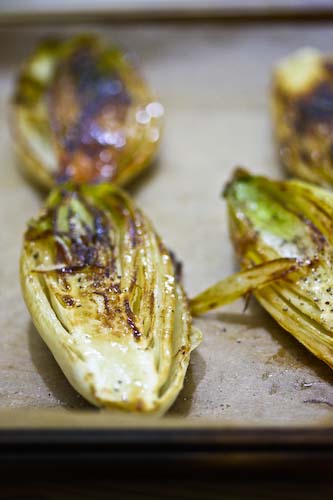 Endive is a bit bitter, coming from the chicory family and all. But if you caramelize it on the stove top in butter and sugar before baking it with a filling of Parmesan cheese, cream and breadcrumbs (oh, and Proscuitto) that bitterness is only one element in a veritable symphony of tastes. (Could I get any cheesier? Probably.) And did I mention that this is a great recipe for a dinner party, since it can be made almost completely in advance and then just thrown in the oven? Well, it's a great recipe for a dinner party. It's also another recipe from Ottolenghi, and proves once again why a trip out there would be well worth it. One day, one day. 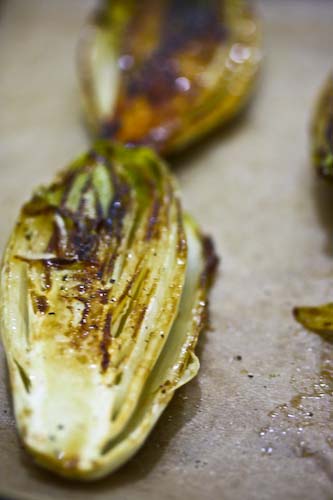 Caramelized Endive with Prosciutto
Only very slightly adopted from Ottolenghi

Preheat the oven to 400F (200C). Line a baking tray large enough to hold all of the endive halves in one layer with parchment paper.

First we're going to caramelize the endives. Depending on the size of your pan, you'll probably need to do this in two batches. In which case, simply use half the butter and half the sugar per batch. Heat the butter and sugar in a pan over high heat until the butter starts to bubble. Immediately place half of the endive halves cut side down in the pan. Cook them for 2-3 minutes until they're golden and well caramelized. You may want to push down on them a little with a spatula. Remove the halves to your parchment-lined baking tray and place them cut-side up. Repeat with remaining endive halves.

Sprinkle the caramelized endives with a little salt and pepper once they're all on the baking tray.

In a medium bowl, mix together the breadcrumbs, Parmesan, thyme, cream, 1/4 teaspoons salt and a good pinch of pepper. Spoon the mixture over the endives, and when I say spoon, I mean use your fingers to kind of mound it on. That's the easiest way to go, I think. Top with one slice each of Prosciutto. The dish can be prepared to this point in advance, which (did I already say this?) makes it a great choice for a dinner party.

Roast in the oven for 15-20 minutes, until the endives are soft. Serve hot or warm, with an additional drizzle of olive oil and a sprinkle of parsley.

Anonymous said…
Yum! Looks delightful. Ever since we started getting a CSA share, I've had to get creative with some things (like endive) that show up often, especially in the winter - for some reason it's never as hard with tomatoes in the summer. I like simply broiling endive with a little vinaigrette, or cooking it on a pizza with some tasty cheese, or (this is a popular one in the France) wrapping it in ham and coating it with béchamel sauce. Who knew the unassuming endive could be so much fun?
February 8, 2010 at 6:08 PM

Eliana said…
That caramelized endive looks so beautiful; almost too good to eat.
February 8, 2010 at 8:36 PM

do you know somebody is copying posts from your blog.Please check this link.

I came to know because Divya's blog was also copied.
http://divyascookbook.blogspot.com/2011/11/plagiarism-strikes.html

Andrea said…
Anonymous, thanks for the heads up. I'll try to do something about it. So frustrating!
November 8, 2011 at 9:21 PM