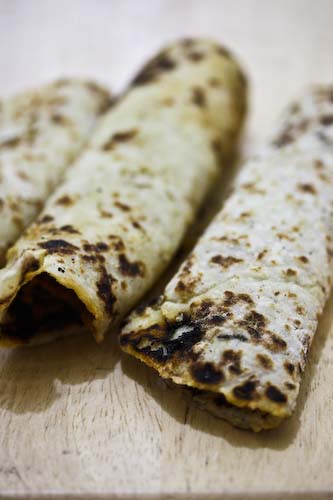 Okay, so I have to admit that I kind of cheated with this recipe. I say that only because all of the other recipes I used for this event were from Norwegian cookbooks actually from Norway, or from family recipes given to us by my husband's sister. However, I don't think I quite grasped the undertaking I was getting us into, and for some reason the thought of making lefse from a traditional Norwegian recipes scared the crap out of me. Perhaps it was the measurement conversions I would have had to do, or the different way they have of explaining some things, but I just thought I'd have more confidence with an American cookbook. So I used one. 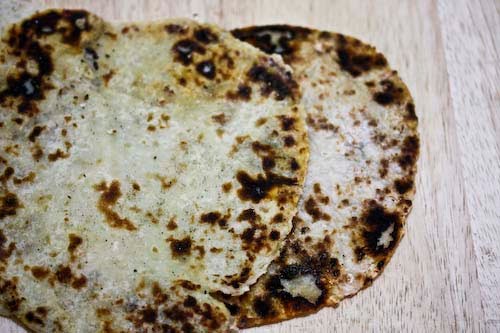 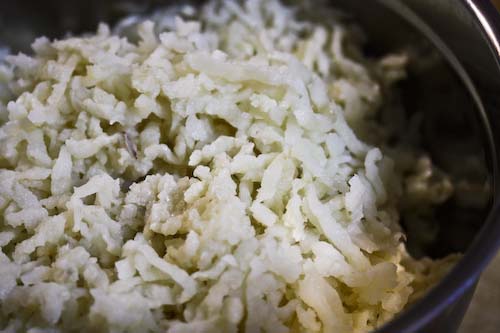 I also discovered that lefse from scratch is a labor of love. Or a labor of pig-headedness and an unwillingness to throw half the batter away to keep from having to stand over a hot griddle for 2+ hours. Because that's about how long it took to bake these off, one at a time, rolling each out to a paper-thinness and quickly transferring each to the waiting griddle. 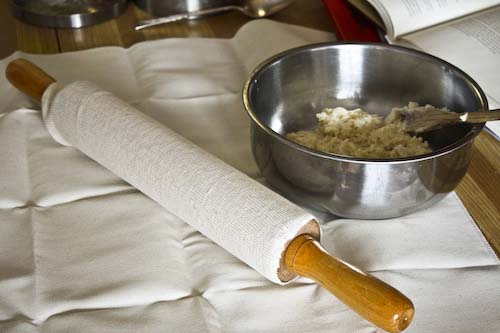 To make lefse, you'll need a few specialized things. First, a cloth rollingpin cover, a pastry cloth on which to roll the dough out, and some kind of lefse stick or two spatulas for the transfer from cloth to griddle. I bought my rollingpin cover and pastry cloth on Amazon, and they worked perfectly. I am, however, not the owned of a lefse stick, and simply used two very thin spatuals for moving. I used a 10" round griddle, which dictated the size of my lefse anyway, but found that all I could manage was about 1/4 cup batter per lefse. Too big and they became too difficult for me to move in my lefse-making infancy. Just a couple more nots: you'll need a ricer or food mill to rice the potatoes, and the batter must be started the day before so it can rest overnight.

The potatoes should still be warm. Using a food mill or a ricer, rice them into a bowl, adding the butter to the ricer/food mill as you work so that it gets combined into the potatoes. Beat the mixture with a wooden spoon until smooth (you can count this as your workout for the day). Add the milk, sugar and salt and continue to stir well. Cool the potatoes uncovered until they read room temperature, then cover them and refrigerate overnight.

The next day: gradually mix in 2 cups of flour with that same wooden spoon until you have achieved a stiff dough. It will be tacky, but it shouldn't be overly sticky. You can kneed in aditional flour if necessary.

Preheat your griddle over medium heat (400 F if using an electric one). Work with one quarter of the dough at a time, keeping the rest of the dough in the refrigerator as you go. For a 10" griddle, use 1/4 cup of batter per lefse. Generously flour your pastry cloth, and your coth covered rolling pin. Toss the 1/4 cup dough ball all over the pastry cloth so that it's well-coated with four. Then press it into a disk 3 to 4 inches in width. Roll it from the center very gently, keeping most of the weight off of the rolling pin so you don't mash the dough into the pastry cloth. Don't turn the lefse as you roll, and don't roll over the edges. Once it's rolled out very thinly, as thin as you can get it, it's time to transfer.

Slip one spatual under one edge of the lefse, and the other spatula under the other edge. Carefully transfer to the waiting and pre-heated griddle (I didn't grease my griddle, by the way). Cook for 1 or 1.5 minutes on the first side, then flip like a pancake and cook for about another minute. When the lefse is cooked, transfer it to a towel to cool. Repeat with the remaining dough.

Serve with a delicious herring salad. May I suggest this one?