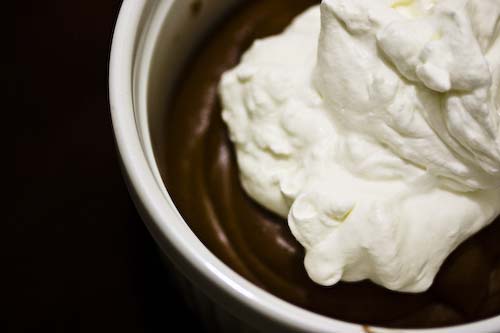 My first job outside of babysitting was working for my dad. He created a special position just for me, where he set me up in one of the spare rooms at his office and stacked loads of letters on one side and loads of envelopes on the other. Envelope stuffing. Looking back, it was a pretty good incentive to stay in school and do my best. I did not want a life-time of stuffing envelopes in my future. The perk was always lunch, I usually got to choose, and at one particular favorite, something of a Denver institution actually, Le Central, I had my first mousse au chocolate. The Le Central version was studded with toasted hazelnuts, and perhaps they used some kind of hazelnut liquor (like Frangelico?) in place of the whiskey in the recipe below. Come to think of it, that's not such a bad idea (keep in mind for next time). 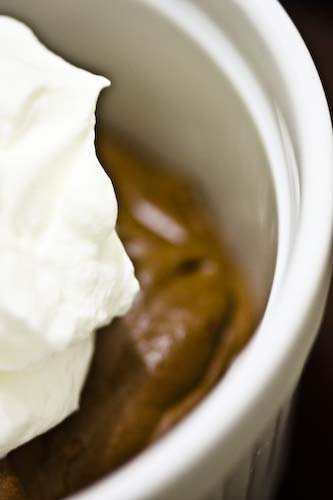 Mousse au chocolate is no pudding. It's lighter in texture but more decadent. And R has been whining about getting some for a long, long time. In fact, you remember that wonderful chocolate tart from a couple of weeks ago? That was a compromise. Because he could have done without the crust and just dug into a big pot of filling. And it's really not hard to put together. I mean, yes, there's a fair amount of whipping, but not having to make a crust does save time. And mousse au chocolate is best made ahead of time, anyway, because it needs a few hours in the fridge to set up. Making it ideal for having people over. So we did. 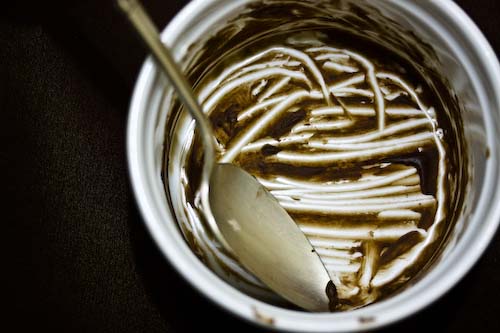 In a heatproof bowl that you can set over a double boiler, combine the chocolate, cocoa powder, espresso powder, water and liquor. Place the bowl over a saucepan of about an inch of gently simmering water. Stir to combine the ingredients, until the mixture is smooth, then remove from the heat.

In a second medium bowl, combine the egg yolks, 1 1/2 teaspoons of the sugar and the salt. Beat until the mixture turns a pale yellow and begins to thicken, about 30 seconds. Pour the melted chocolate mixture into the egg mixture and whisk together until combined. Set aside for 5 minutes, until it's just warmer than room temperature.

In the meantime, using either a standing mixer with the whisk attachment or a hand-held, in a very clean bowl, beat the egg whites on medium-low speed until they froth. Add the remaining 1 1/2 teaspoons sugar, then increase the spead of the mixer to medium-high and beat until the soft-peak stage. Using a rubber spatual, fold about 1/4 of the egg whites into the chocoalte misture. Then fold in the rest until only a few white streaks remain.

You can use the same mixer bowl for the next step. Whip the heavy cream at medium spped until it starts to thicken, then increase the speed to high. Whip until soft peaks form and it looks like, well, whipped cream. Using the same rubber spatula, fold all of the whipped cream into the mousse until completely combined. Spoon into individual serving dishes, top with extra whipped dream, cover with plastic wrap and refrigerate for at least 2 hours and up to an entire day.
Email Post