Norwegian Applecake with a Twist 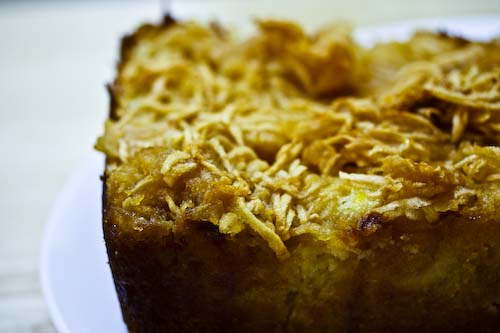 So I can't say this cake was a complete success, nor was it a failure. And it was partly my fault, partly not. The recipe comes from a book I'll be spending some quality time with. Already have, in fact, with a particularly spectacular recipe that's on deck for publishing in the next couple of days. So the book can be trusted. I received it as a birthday gift from my parents-in-law back in October. But you'll remember that was during the black hole of orals, so I'm only just now getting to know it. Anyway, it assumes a certain amount of kitchen know-how, most of which I have, some of which, it turns out, I don't. For example, this cake would have been better made in a round spring-form pan, not in a loaf pan. It's a delicate butter batter crowned by heaps of apple. Apple which tends to render its juice into the cake, and in the case of a loaf pan, soaking it all the way through in the middle. Next time I would probably toss the grated apple with a bit of corn starch to help absorb the juices. 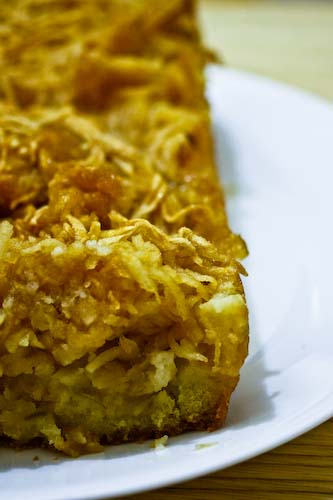 But the crusty part was Delicious. De. Licous. The essence of apple, so it's important to use wonderful ones. I chose Pink Ladies, because come on, Pink Ladies. There can't be anything wrong with an apple called Pink Lady, and they tend to be good for baking. And speaking of apples, I very much suggest you use a food processor to grate them. Then, in order to further avoid the soggies, don't use the mashed bits that tend to collect around the sides, but only the ribbons. Ribbons of pink lady to crown your Norwegian apple cake and soak up the drizzle of orange juice. That's the twist.

Separate the eggs, then beat the egg whites until stiff. Add the egg yolks and sugar, as well as the melted butter, flour and bakin gpowder. Stir well and pour into a round spring-form pan. Peel the apples and cut around the core. Grate them coarsely and heap on top of the batter in the pan.

The oven should be preheated to 350F. Bake the cake for one hour. In the meantime, make a thin powdered sugar glaze by melting the powdered sugar and orange juice together in a small saucepan until the sugar is dissolved. Remove the cake from the oven and drizzle the glaze over the top. Remove from the pan and serve.

Note: Next time, I would put the apple shreds in a dishtowel and squeeze out the extra juice so that the cake doesn't get soggy. If you try this recipe, definitely take this step.

Lucy said…
I love this unusual recipe, I haven't seen anything similar before. I can just imagine the gorgeous apple juices soaking through the cake - yum :)
February 14, 2010 at 3:36 PM

Those are the only things I can think of at the moment... but I think your juicy, apple-soaked cake looks gorgeous. :)

sweeetheartfever said…
this looks amazing. beyond amazing! i just recently made your squash and feta quesadillas for dinner while i was home visiting my parents. they were a wild success!!! thank you so much for the lovely recipe!
February 15, 2010 at 8:03 AM

organic baby crib said…
This is a very interesting recipe! So unusual recipe but I find to delicious. I would like to try it!
February 16, 2010 at 7:54 AM

Windwich said…
I just baked this cake. I found it very tasty since I don't usually like apple cakes. But I have some notes....
I didn't use 6 apples, I only used 4 since it's not a lot of batter (only 2 eggs and 3/4 cups of flour). To avoid the soggy apples I sprinkled some semolina.
But what definitely didn't fit was the baking time. In only 30 minutes my little cake was burnt!!
Except that the cake is soft and sweet.
February 17, 2010 at 5:16 PM

Andrea said…
Toxobread, great suggestions. I'm going to keep working with this recipe, so I'll let you know how it goes.

Madalina, it burnt after 30 minutes?! Wow, I had mine in the oven for 1 hour and it was nowhere near burned. I wonder if that's a function of using fewer apples (which was probably a good idea.) Did you use a springform pan, I wonder? And did it turn out to be not as soggy? I have another apple cake I'm going to try next week, so I'll let you know if that one works out better.
February 17, 2010 at 7:46 PM