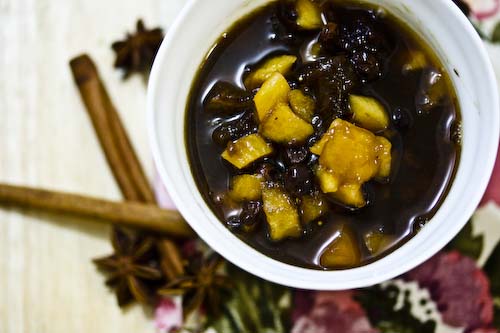 I don't think I've ever written a blog post from my desk in the reading room at school before, but today is an exceptionally gray and dreary day, and I'm feeling particularly ambivalent about the development of the French Academy in the 17th century (that was already too much information, wasn't it?). Anyway, the one thing that does make me happy right now is knowing that I have a couple more bowls of this soup waiting for me at home. Because it's an old truism that we crave what we can't readily have, and for me, that's always good fruit in winter. Since I'm no miracle worker, I often settle for dried fruit. Dried fruit has never been as delicious as it is in this recipe. 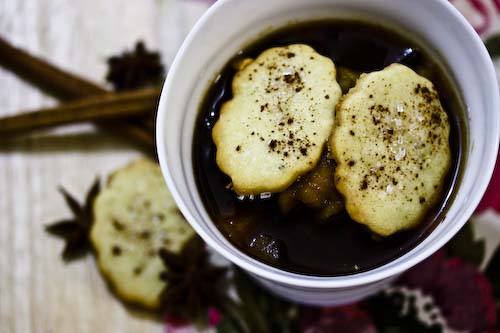 I could go on and on about how flippin' delicious this stuff is. How you can serve it warm and cold and how both have their charms. And believe me, all of that is the gosh darn truth. This stuff is addicting, and satisfying and it just brightens moods. But one of the best parts about it is the pie-crust croutons floating on top. I feel like I'm bringing a certain chocolate tart up a lot lately, but if you do make it, you'll probably end up with some extra Super Delicious pie crust that you won't want to throw away. So instead, you might roll it out and using your smallest cookie cutter, make little rounds to be sprinkled with rock sugar and popped in the oven. 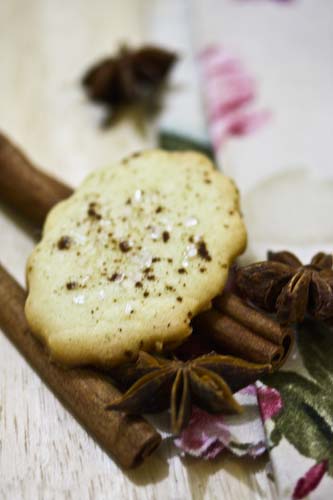 If you do that, you'll have no excuse not to make a wonderfully heady and deeply spiced Scandinavian Sweet Fruit Soup to go with your sweet croutons. Actually, one possible obstacle could conceivably be the location of pearl tapioca (how many times did I have to explain that I just wanted the pearls, not the pudding, to the people at the various grocery stores? Many.) So save yourself some hassle and if you have access, head directly to Whole Foods. They have it there. They might even know where it is when you ask. If you can't find it, please don't let that stop you. I'll admit it adds a little something, but it's only a little something, and the soup will be equally delicious without it. 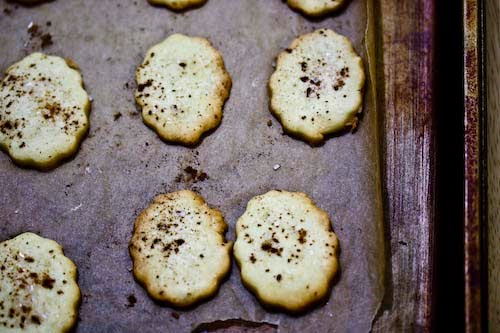 For the Pie Crust Croutons

Roll out your leftover pie crust, or scraps of any rolled cookie, use your smaller cookie cutter to cut out little croutons. Brush them with a little water or egg white and sprinkle with cinnamon and pearl sugar if you have some of that laying around as well. Bake in an oven preheated to 350F for 5-10 minutes (depending on the size of your croutons). They should be a light golden brown. Serve floating atop a bowl of søtsuppe.
Email Post

Sarah said…
Oh, I love fruit soup. It's common in my mother's family (they are Mennonites). So tasty. But I have not seen it with croutons before; what a nice addition. Thanks for posting.
February 23, 2010 at 10:41 PM

Andrea said…
Hi Sarah, my username is aebell. Is that what you tried? I can't imagine why it's not working. I'll do some looking into it. Thanks for the twitter love, girl!
February 23, 2010 at 11:38 PM

Sarah said…
Hello Andrea, the problem is with the setup of your twitter gadget in the sidebar of your blog. It says your username is ae.bell.
February 24, 2010 at 7:12 AM