In their book Norwegian National Recipes, Arne Brimi and Ardis Kaspersen write that Sour Cream Porridge, or Rømmegrøt, is without question a Norwegian national dish. Although they say that it's been served at parties and celebrations for centuries, R tells me that his family usually had a porridge like this one on Saturday afternoons, before the fancier meal reserved for Saturday nights. I don't think Americans are particularly familiar with all the versions of porridge out there, and we're certainly not used to eating them for meals other than breakfast. But this one is meant to be served as a main course, topped with raisins, sugar and cinnamon. Brimi and Kasperson also suggest a sprinkling of chopped hard-boiled egg, but R was having none of that. The week before our Norwegian extravaganza, R and I traveled to Bay Ridge, New York to visit Nordic Delicacies, an authentic Norwegian deli, run by blond haired, blue eyes Norwegian expats and stocking all of the authentic foods you can't find elsewhere in the city. I'd had this porridge in mind when we went because it just sounded so, well, strange. And I'm a sucker for strange-sounding food. R insisted that it was very important to serve rømmegrøt with slices of cured mutton, called fenalår. In Norway, you'd be able to buy slices of fenalår, but I suppose there's not a huge market for it here in NYC, so the woman at Nordic Delicacies offered to sell us the entire leg of mutton. How do you turn down an entire leg? You don't. And we didn't. See below. 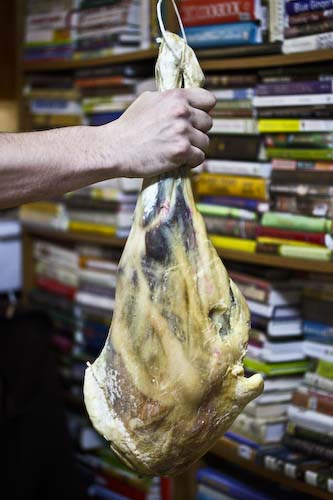 Without the fenalår, rømmegrøt tastes like a breakfast food to me, actually quite delicious (delicious enough for me to demand that R not throw away the leftover porridge so I could enjoy it again this morning. And enjoy it I did). But, as one of our guests, let's call him A said, (and I should mention that A is from Venice, so he knows his cured meats) the fenalår really brings the rømmegrøt, sugar, cinnamon and raisins together. In other words, the fenalår is what makes it a main dish fit for a celebratory meal. Or any Saturday afternoon.

UPDATE: There's been some discussion that this rømmegrøt is too thick, and should be runnier. Since the two commenters to suggest this are both Norwegian, I think we can trust them. So if you want something closer to the authentic version, I'd suggest thinning it out further with extra milk. 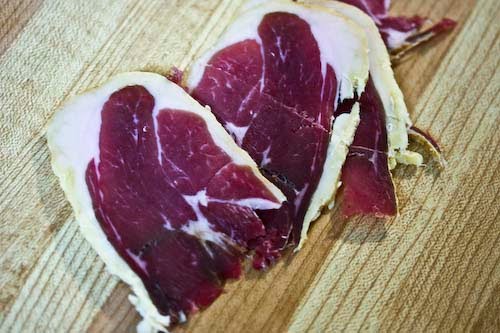 Sour Cream Porridge or Rømmegrøt
From Arne Brimi and Ardis Kaspersen's Norwegian National Recipes, with extra instructions from me

Boil the sour cream over medium heat for 3 minutes in a covered pan. Whisk in half the regular four and stir vigorously to avoid lumps. Simmer, uncovered, for 5-10 minutes. At this point you can skim off any fat that's released to the top. In the meantime, whisk the egg into the other half of the regular flour. Add the egg mixture, along with the semolina and milk into the porridge. You'll probably need to switch to the wooden spoon at this point. But stir like you mean it so it doesn't become lumpy. Continue simmering and skim again if you need to. You can add more milk to thin it out a little. Serve with a sprinkling of sugar, cinnamon and raisins and a side of fenalår.

Andrea said…
Hi Edona, thanks for the comment! The way this rømmegrøt turned out, it looks pretty much identical to the picture in Arne Brimi's books\ 'Norwegian National Recipes.' But I wanted to look into your comment a bit more, and found another version of the dish in a book called 'The Norwegian Kitchen' which was indeed much more runny. Perhaps it's a variation related to different regions of Norway? Either way, I had no idea a sour cream porridge would be so delicious!
January 16, 2011 at 9:59 PM

Stine said…
I've never seen rømmegrøt like this before. It's supposed to be a lot more runny. This looks more like "risengrynsgrøt" (with the wrong ingredients). I've eaten rømmegrøt a lot of places in norway, and never seen it like this.
But enjoy anyway, it looks good ;)
January 16, 2011 at 10:08 PM

Andrea said…
Well you girls are probably right then. I think you could thin it out with additional milk? What do you think?
January 16, 2011 at 10:11 PM

afoglia said…
I think it's a difference in style. I was in Oslo visiting a friend a few months ago, He took me to Frognersetern, a restaurant/cafeteria with a great view of the city and sea. The rømmegrøt there was very runny, and soft, like sweet, buttery, smooth farina.

Earlier that day, I was lucky enough to attend Matstreif, a Norwegian food festival, and there one of the stands was also offering rømmegrøt but it was much thicker, almost like cream cheese consistency, and had completely separated (like the picture here, but smoother, and with puddles of dark yellow buttery liquid). My friend was with me then as well, and he pointed out the spelling the people running the stand talked with a country dialect. And the sign spelled the food "rømmegraut". (And judging by the lines, the locals had no complaints.)

Andrea said…
Thanks for the comment Afoglia. Fascinating how recipes change by region etc. In any case, I still think it's delicious. And lucky you, spending all that quality eating time in Norway!
January 20, 2011 at 3:52 PM

Anonymous said…
The real "rømmegrøt" is made without semolina and egg. And in the old-fashion way, its made with full-fat sour cream. During the cooking one is supposed to skim off the fat and serve it with the porrigde.
You're welcome to check my blogpost on "Rømmegrøt".
http://smakebiten.com/2012/05/14/ekte-rommegrot-laget-med-speltmel/
June 13, 2012 at 2:24 PM

Unknown said…
I LOVE Rømmegrøt!! Each fall, here in Minot, North Dakota, North America's largest Norwegian/Scandinavian festival is held. This year the Nørsk Høstfest begins on October 1st (2013) and will run for 5 days. For more information check out en.wikipedia.org/wiki/Norsk_Høstfest or
www.ndtourism.com/events/norsk-høstfest
There are so many things to see and do, but I have to confess that I mainly go for the food...especially the Rømmegrøt!!
August 11, 2013 at 6:14 PM

Cryptocurrency said…
If I can write like you, then I would be very happy, but where is my luck like this, really people like you are an example for the world. You have written this comment with great beauty, I am really glad I thank you from my heart. Real Girl Number Gurugram
January 20, 2022 at 9:40 AM