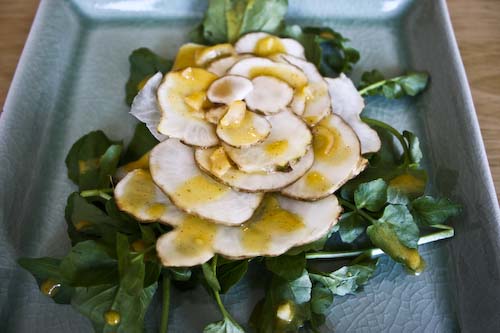 Let me set the scene for you.  I was at the farmers market looking for quinces for this recipe when I noticed a table of Jerusalem artichokes.  Having them on the outskirts of my mind as I did because of this post over at Dana Treat, I headed over immediately, along with three or four other curious bystanders.  As I started digging in, one girl pulled a knotted little thing from the basket and asked her mother "what the heck are these."  Her mom shrugged and then, noticing the sign, said "Eeww, they're artichokes, gross.  Let's go."  In instances like these, I'm always tempted to pipe up and lay to rest a few misconceptions (it happens at art museums more than it does at farmers markets, but I learned my lesson after I once gave a little old lady a lecture on nudity and Viennese expressionism at the Neue).  So the mother/daughter team were spared my didacticism.  But just incase you're thinking of passing up the Jerusalem artichoke because you hate artichokes (which they in no way resemble), or ginger (whose flavor they in no way share) please reconsider. 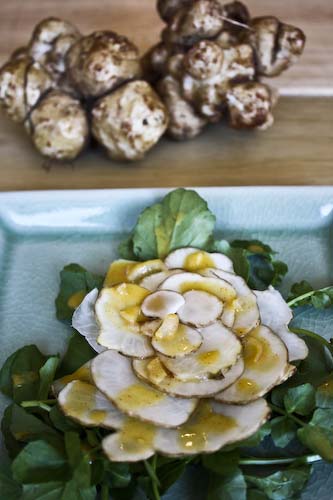 The Jerusalem artichoke is a strange little creature.  Its misnomer suggests a Middle Eastern heritage, when in fact it is, according to Elizabeth Schneider in her encyclopedic Uncommon Fruits & Vegetables: A Commonsense Guide, one of the few North American natives to be integrated back into Old World cuisine.  Unrelated to either the artichoke or to Jerusalem, you might also stumble on these ginger-root-looking tubers under the name of Sunchoke, Topinambour, Racine do Tournesol or Girasole.   Anyway, it seems that the story of its migration back to Europe is a foggy one, shrouded in all of these silly labels.  But isn't the Native American name, sunroot, so much better?  If I can, I propose an immediate switch.  And what better time than the peak sunroot season of late fall and early winter?
These earthy little delights can be just as easily eaten raw as cooked, and I intended to explore both ways with my recent haul.  We'll start with raw.  This salad is flavorful, creative, and unexpected, and it can be made well in advance as the Jerusalem artichoke doesn't become limp or discolored from dressing (so in this way, it kicks the regular artichoke's easily-oxidized butt).  But the important thing to remember is to scrub, scrub, scrub. They don't need to be peeled, but they do need to be well-cleaned.  One way to do this is also to slice first and then rinse well in a strainer, thus avoiding the trouble of having to get in between all those little knobs. 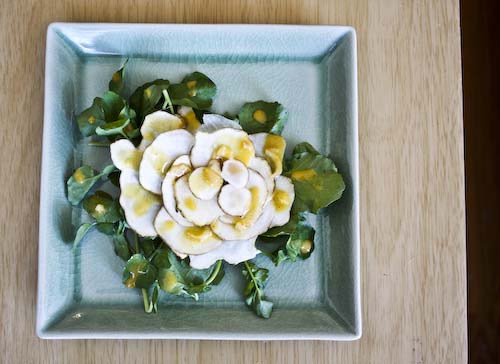 Here, in a recipe from Uncommon Fruits and Vegetables, the Jerusalem artichokes are cut paper thin and dressed with a delectable mustard dressing before topping a bed of light and fresh watercress.  Although Schneider calls for corn oil, I used olive, which is what I have and what I like.
Jerusalem Artichokes in Mustard Dressing
1 egg yolk
1 1/2 teaspoons mined shallots
1 scant tablespoon coarse-grain mustard
1 tablespoon cider vinegar
Pinch of cayenne pepper
1/8 teaspoon salt, to taste
5 tablespoons olive oil
1 lb Jerusalem artichokes, well scrubbed
1 bunch watercress, trimmed, rinsed and dried
Combine the first six ingredients in a small bowl.  Whisk while incorporating the oil.
Slice the Jerusalem artichokes as thinly as possible, ideally with a mandoline.  Toss the artichokes in a bowl with the dressing and chill for between 1/2 and 1 hour.  Serve over the bed of watercress.
Email Post
Labels: Elizabeth Schneider Uncommon Fruits and Vegetables

Anonymous said…
This is really interesting. I've never tried Jerusalem artichoke/sunchoke/whatever, but I'm certainly open to it. Your presentation is so pretty!
November 19, 2008 at 5:20 PM

Anonymous said…
Yum - I love jerusalem artichokes - never tried them raw, though, and I will have to do that.

I would have died a little inside if I had overheard that comment...a little voice in my head would have wanted to scream out "no! wait! you don't know what you're missing!" :)
November 19, 2008 at 9:28 PM

Dana Treat said…
Thanks for the link! This is an awesome idea for those tasty little guys. How did they taste raw? BTW: I loved your post yesterday. I am in a bit of a fog just now so can barely form an opinion, let alone write about one. I really appreciated the thoughts though.
November 19, 2008 at 10:19 PM

Anonymous said…
you made it looked like flower! amazing... i've never tried jerusalem artichoke before, so i'm clueless on how to cook it.
November 19, 2008 at 11:07 PM

Anonymous said…
Those photos look like paintings! Really, they're beautiful.

The first time I had an Jerusalem artichoke, I had no idea what I was eating. It was in Quebec, and it was "topinambour" on the menu. Great word, huh? They were delicious!
November 20, 2008 at 4:00 AM

Sam said…
I have had these before but it was so long ago I've forgotten what they tasted like! I'll have to hunt some down.

Anonymous said…
When the browser window first opened I thought it was a rose. The dark green watercress really sets off the flower shape. Beautiful!

Maia said…
This is one of my favorites - I love the earthiness of it. My husband thinks I'm lacking iron because I always go for root vegetables and things that taste of earth and minerals.

Andrea said…
Fearless Kitchen, Veggie Belly and Eliza - I love these little things, and I'd definitely suggest grabbing some if you ever happen to see them!

Amy, I know, but I had a feeling they weren't really up for experimenting.

Dana, I'm going to try a soup next, I've been so inspired by you!

Thanks Dances! Hope you're setting in to your new home well!

Hanne, yes, I love that name too! We can switch right away!

Julie, I know! How can you hate artichokes? It's a travesty!