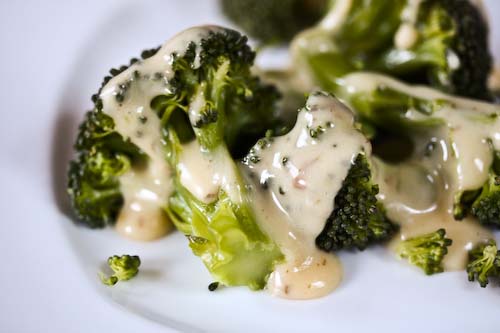 In my last post, I told you how I sometimes use evaporated skim milk thickened with a little cornstarch in place of heavier cream when I'm trying to keep a recipe a bit lighter.  After the Penne and Shrimp with Cilantro-Cream Sauce, I had just enough evaporated milk left over to make this cheese sauce.  Since there seems to have been a little interest in the technique, I thought I'd share this recipe with you as well, in case you also find yourself with leftovers.
I think it's a fine tasting sauce.  Not as heavy as a traditional cheese sauce, and perhaps not as richly flavored.  But it also manages to keep broccoli from turning into an indulgence. And let's face it, if I'm going to indulge, it's not going to be on broccoli.  There are things with chocolate and peanut butter in them for that.
Lightened Cheddar Cheese Sauce
Adopted slightly from Evelyn Tribole's Healthy Homestyle Cooking
3/4 cup Cabotte 2/3 reduced fat cheddar cheese
3 teaspoons cornstarch
3/4 cup evaporated skim milk
Grate the cheese into a small bowl, then sprinkle with one teaspoons cornstarch.  Toss to coat the cheese with the cornstarch.
In a small saucepan, whisk together the remaining 2 teaspoons cornstarch and 2 tablespoons of the milk.  Then add the rest of the milk and place on the stove over medium heat.  Whisk pretty much constantly until it starts to thicken and bubble, then continue to cook and stir for one minute more.
Reduce the heat to low, and stir in the cheese, cooking only until just melted.
Drizzle over steamed or raw broccoli and enjoy.
Notes:
* It was in a Cook's Illustrated recipe that I discovered that Cabotte 2/3 reduced fat cheese is a rather perfect combination of a lighter cheese that maintains a nice melting texture.
*  You could spice this up a bit by adding a can (4.5 oz) canned chopped green chilies.
*  The cheese sauce makes fine leftovers, if you have any.  Just return to the saucepan and heat over medium, stirring, until it's back to the same melting texture.
*  Other than broccoli, you might consider trying it with asparagus, cauliflower, or even over a baked potato.
Email Post
Labels: Evelyn Tribole Healthy Homestyle Cooking

Kavs said…
My mind is already whirling with a myriad of veggies to pair this yummy sauce with!

unconfidentialcook said…
What a great way to get kids to eat broccoli (or cauliflower) and keep 'em healthy.
April 30, 2009 at 2:51 AM

Dana said…
I'm with you - I usually just steam my veggies because I would rather splurge on something else. This looks like a nice balance. I've never heard of that cheese. Is it tough to find?
April 30, 2009 at 5:26 PM

Andrea said…
Dana, it might be hard to find in the west. It's a Vermont cheese, so I'm not sure how far afield it's gotten. But really, any reduced fat cheddar is probably fine. But next time your out this way, treat yourself to a real Vermont cheddar (not reduced fat) because they are wonderful!
April 30, 2009 at 5:29 PM

Hayley said…
My sister loves cheesy broccoli. I'll have to see if I can fool her with this lightened up version. Thanks Andrea!
May 1, 2009 at 2:09 AM

Anonymous said…
I once found myself with the better part of a case of evaporated milk (there was a tres leches cake and a costco trip involved) and no idea what to do with it. I was making mac and cheese and decided it couldn't hurt to sub inthe evap. for some of the milk. And you know what? It makes a killer cheese sauce that it is almost impossible to break!
May 1, 2009 at 11:44 AM

Amy L said…
This recipe looks yummy. Most broccoli with cheese sauce is way too rich for me. I use evaporated 2% or skim milk in my cooking, too. I don't find many recipes that use it, so I will be watching your blog for more. Thanks!
May 9, 2009 at 3:00 PM

www.castellon-3d.com said…
Quite helpful piece of writing, much thanks for this article.
November 25, 2011 at 8:29 PM