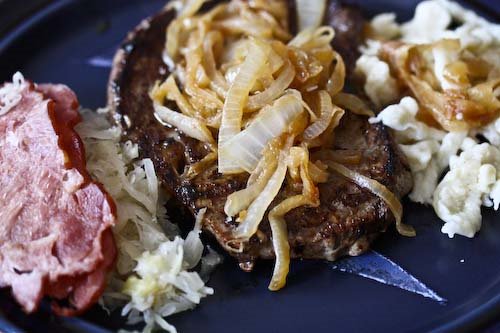 This is one big mess of a plate of food. But I wanted to show it to you so you'd have an idea for what to do with your spätzle. I'm only going to torture you with one image, so once you scroll past this top part, you should be okay. But this is a good lesson for us, anyway. In the overabundance of food porn sites, full color cookbooks and glossy magazines. Not all meals were made for a photo op. Some dishes actually have roots going back past the time when aesthetics were considered a crucial component of the meal. Maybe this makes them a bit more honest about what they are. Less artful, more substantive. Less bourgeois (not that I have anything against the bourgeoisie, being a product of it myself) more peasant. Not for the eyes as much as for the belly (I could go on, but I'll spare you).
This is a traditional Swabian festive dish, from the southwest of Germany, just like spätzle. There are four main components: the steak, the bacon and sauerkraut, the spätle, and the smothering of onions. Everything is heaped onto a plate, in neat rows initially. But flavors from one seep into flavors from another, and it becomes something of a mish-mash en route to your mouth.
Pan-Fried Steak with Onions, Swabian Style
Scaled down from Horst Scharfenberg's The Cuisines of Germany
2 9 oz. steaks
Salt and pepper
5 slices bacon
1 tablespoon clarified butter
2 medium onions, thinly sliced
1 tablespoon butter
Sauerkraut (from a can for me!)
Cooked spätzle
Score the edges of the steak so that it doesn't curl when cooking. Season both sides with pepper and set aside for a moment. In a skillet, cook the bacon until much of the fat is rendered, then set it aside as well, keeping the fat in the skillet. Add the clarified butter to the bacon fat and cook the onion in it until well browned and caramelized. Remove the onions from the skillet and set aside.
Pan-fry the steaks in the remaining fat for about 2 minutes per side (but you must be the judge of time depending on the thickness of your steaks and your preference for doneness). Sprinkle the steaks with salt, add the butter and fry the steak for one minute more on each side.
Set the steaks aside and cover to keep warm. Return the onions and bacon to the skillet, as well as the sauerkraut, and heat until warm, keeping them separate.
Place each steak in the center of a dish, heaping some of the sauerkraut on one side with the bacon strips over it. On the other side, serve the warm spätzle, pouring the remaining fat and juices from the pan over the top. Finally spoon the onions over the steak and serve.
Email Post
Labels: Horst Scharfenberg The Cuisines of Germany

Marguerite said…
Oh, this is some of my most favourite food ever! I grew up in Stuttgart and both Spätzle and Rostbraten are just some of the things I look forward to when coming home. I am glad that the cuisine from the south of Germany is finding some lovers stateside, I firmly believe it is one of the best in Europe!
And also: Congratulations on your wedding!
June 26, 2009 at 9:00 PM

Anonymous said…
My family is made up of generations of German ladies that can cook like no other. We always make the spatzle with a pot roast and lentils. I always request this for my birthday dinner!
:]
June 28, 2009 at 4:10 AM